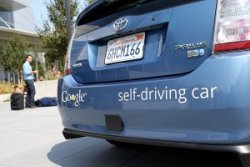 If people that text and drive tick you off, then you might be in luck. Tomorrow, Colorado’s Senate Transportation Committee will discuss a driverless car bill that allows drivers to text – and not drive.

Self-driving cars sound like something out of a science fiction novel, but Google has been developing the cars since 2010. And after testing them over 300,000 autonomous-driving miles with zero accidents, it seems as if driverless vehicles have arrived.

If the bill up for debate Tuesday is passed, Colorado will become the fifth state where autonomous cars are legal. Nevada was the first state to allow driverless cars on the road in March 2012.

Fret not, though. The bill isn’t as ridiculous – or as creepy – as it sounds.

A licensed driver still needs to be behind the wheel, and each driverless car must have an override switch that allows the driver to take control of the car at any time. Additionally, touching the brake or turning the wheel would override the autonomous system, putting us humans back in control. The bill also requires that the autonomous system alert the driver when it is engaged and in the event of system failure. If the driver does not respond after being warned of a system failure, the car will come to a stop.

Ideally, the bill cuts down on accidents caused by using phones while driving. Since most of us are glued to our smartphones, self-driving cars would allot us to do more important things…like safely texting and Facebook-ing while driving.

The bill is sponsored by Republican Sen. Greg Brophy, who also recently presented the “Drinking with Dad” bill, which would have allowed 18- to 20-year-olds to drink with their parents but was rejected 4-1 last Wednesday.