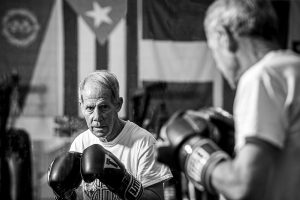 Davis Phinney is a former professional road bicycle racer from the United States. He was a brazen sprinter and a star of the 7-Eleven Cycling Team in the 1980s and early ’90s, and is the leader in race victories by an American, with 328. “In 2000,” the foundation website notes, “after years of feeling not quite right, and an almost endless round of tests, Davis was diagnosed with Young-onset Parkinson’s disease (YOPD)…Realizing that there are ways to improve the quality of his day to day living, Davis started the Davis Phinney Foundation as a way to promote and fund innovative research that demonstrates the effects and importance of exercise, speech and other elements that are critical to quality of life.” Enter Bill.

When I say that Bill is fighting a charity boxing match for the Phinney Foundation, I should also point out that at 70 years old, Bill “got here because developed parkinson’s disease three and a  half years ago. I was diagnosed,” he tells me.

Boxing – and exercise in general –  “has been well established to help people with Parkinson’s slow progression, reduce motor symptoms and improve quality of life,” according to the Phinney Foundation. That’s pretty magical. Who knew that a sport long correlated with frontal lobe damage and brutality, as well as with the beautiful footwork and spirit of Muhammad Ali, could also be used as a treatment for a wildly debilitating disease?

The Founder Fight evenly matches fighters by age and weight class. Or at least they should. “It’s hard to find a 70 year old to box,” Bill laughs, “So I box the coach.” The fight will be at the Boulder Theater, but it’ll have passed by the time you read this. “It’s a wild time, they’re a rowdy bunch,” Bill says, which makes me feel like I need to hit up the next one for sure. Money for a good cause, local fights, and the Boulder Theater is gorgeous. He guesses that around 500 people come out to these events.

I spoke with Bill at The Corner Boxing Club on Central in Boulder; it’s helmed by Carrie Barrie, a 10x National Champion, Former Captain of Team USA, Coach of US Youth & Junior 2015 World Championships. Bill is quick to tell me she was the women’s Olympics boxing coach in London 2012. So basically she’s a badass. TCBC has a program called Parkinson’s Knockout & Senior Gloves, serving as a resource to Senior & PD Fighters. Bill says that after he was diagnosed, “I came to this gym where we introduced ourselves and found that there were 20-25 people that were in the same boat that I was in. He trains 4-5 days a week, working on his swing – “Keep your hands up, Bill,” Carrie yells from across the gym – and staying as healthy as possible as Parkinson’s progresses.

When we look at Parkinson’s, the most famous case today is arguably Michael J. Fox. He went from Back to the Future to short bursts of acting because of the severity of his symptoms. Symptoms of Parkinson’s include like a balance, mobility issues including gate, and the famously obvious tremor.

Here’s some more Parkinson’s pop trivia. Bill tells me that while Marfan syndrome is commonly suspected, Abraham Lincoln is also suspected of having Parkinson’s. The reason for the diagnosis is a little bit of forensic photography. Most photos of Abraham Lincoln, Bill tells me, show him with a blurry left hand, indicating a tremor; he was one of the first presidents photographed, as technology was still relatively young at that point.

Bill’s own left hand, taped up and ready to box, tremors the whole time I spoke with him. His face alternates between boxers grimace and friendly smile, his eyes blue and piercing with a flame that refuses to be extinguished at any point soon. He’s a fighter. I’m sure many of us think that Parkinson’s is a death sentence, the end of life as we know it, but Bill calls it “a challenge, a minor annoyance if you keep it managed. If you got it, you got it,” he says, in what can only be called the most positive outlook one could have in this situation. It makes sense because he has a strong team.

He is shadowed, even while shadow boxing, by his wife Coe. High School sweethearts in Oklahoma City, they both went to college on the East Coast where Bill studied petroleum engineering at Princeton while working in the field. They married in their mid-twenties and she moved to South Texas to be with him. They split their time between Boulder and Oklahoma City now, fighting at a gym called Solid MMA-Cobra BJJ. They’ve been together for 44 years – an old school romance, the best kind – which has stood the test of time even through, as Coe put it, the different stages of marriage. They have three kids.

Bill, the fighter that he is, didn’t even retire till 67 years old and then only because of the onset of Parkinson’s. Where many of us want to retire by 45, most of us retire by 55 or 60, can you imagine loving your career so much that you work past 65?

Even while today we can question the efficacy of an industry that’s pushing us towards climate catastrophe, back when Bill started there was no question about the value of oil and gas. Indeed, oil fueled the world when there was no other option. He worked for Exxon as a young man, but his larger career was in owning his own engineering firm.

Speaking with Coe, she tells me that even though he was diagnosed at 67, she could see things popping up for a decade before. And she’s determined, even if there’s a bit of exhaustion in her eyes and a bit of sorrow for the parts of life that she has to forego now – travel, alone time – that’s she’s “going to see him through this.” There’s a warmth about her, an elegance, and, like Bill, a piercing depth to her eyes. She’s clearly a fighter, too, and probably the best person Bill can have in his corner. His corner in life. His corner in the boxing gym. His corner of the ring.

On advice for folks hitting 60/65, getting to the age where Parkinson’s can hit, he says, “The symptoms are…they’re easily…you can tell when you got it. It’s obvious once the tremors begin and the balance problems start. It’s best to see a neurologist and look for a diagnosis.” And then, I would suggest, go to the gym and start working out.

Bill’s a fighter. I’d bet on him to win.

Reach out to the Phinny Foundation at davisphinneyfoundation.org. Join The Corner Boxing Club at thecornerboxing.com