The Sugar Glider is a small, omnivorous, arboreal, and nocturnal gliding possum. Not the best resume for a companion animal, but they have become a very popular exotic pet. Which puts them and many other species in danger of being impulse pets. Sugar Gliders are among many exotic companion animals kept in Colorado. An exotic pet is a rare or unusual animal pet: an animal kept within a human household which is relatively unusual to keep or is thought of as a wild species, according to Wikipedia. These animals need specialized care and knowledgeable guardians to be successful as family members.

As with any partnership between animals and people, a lot can go wrong. It went badly wrong for Budgie. Northern Colorado Herpetological Society (NoCoHS) gained custody of Budgie when his owners showed up wanting to adopt a reptile from them. Surrendered in his small, filthy cage, Budgie was covered with bald spots from chewing himself, a behavior caused by loneliness. Sugar Gliders are intelligent, social animals needing mental stimulation and, hopefully, the companionship of others of their species. NoCoHS took him to Colorado State University (CSU) because he couldn’t defecate – a serious problem. Veterinarians suspected he had something stuck in his intestines. Despite all their efforts, Budgie, the Lonely Sugar Glider, passed away under their care. 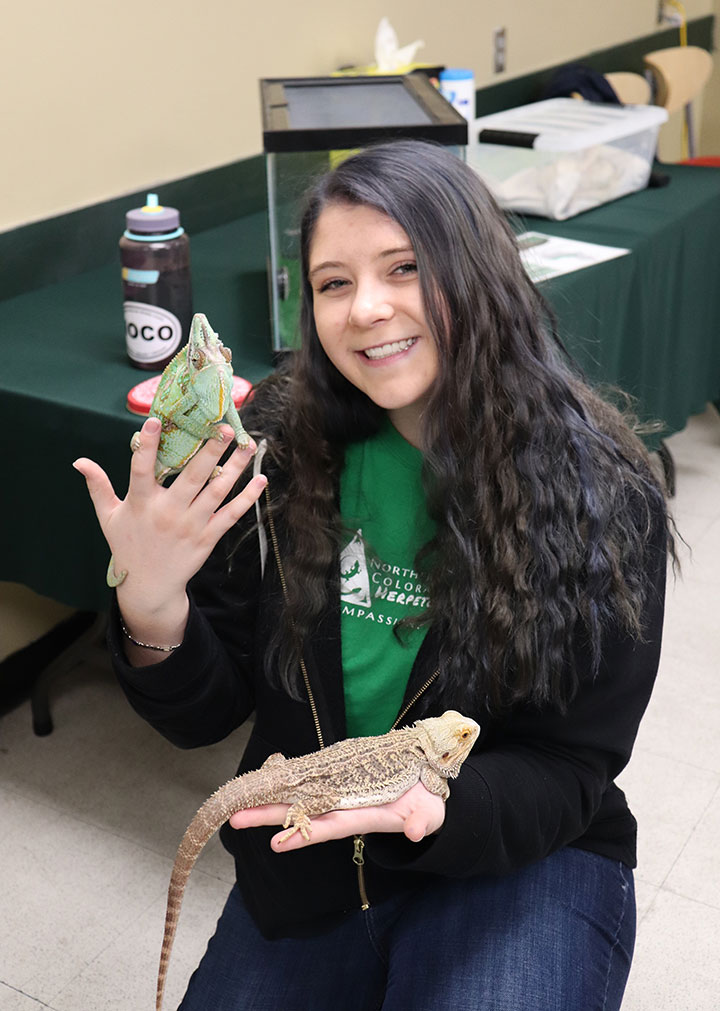 Knowing is half the battle.

Every expert in the field of exotic species has the same message for prospective guardians – do your homework! “Many of these animals live exceptionally long lives and that can be a shock of commitment to some”, says Kate Boyd, President of NoCoHS, “Don’t be afraid to reach out to groups and organizations for information and questions”.

It is best to stick to well known and commonly kept species. Many species are sold as pets with little or no knowledge of their diet or proper care. Nick Fisher, PACFA (Pet Animal Care Facilities Act) Program Manager for the State of Colorado, cites invasive species being sold in Colorado. Pet dealers are a step ahead of regulations, bringing in species the law doesn’t cover. If these are released into the wild, they can decimate natural populations. A new animal of concern to PACFA has entered Colorado. The Degu, a hamster-like rodent, cannot be purchased in Colorado any longer because, if released, it could displace native species. Many people release their pets when they tire of them. Some Degus were sold before the rules could be changed. A regulatory vigilance is necessary to protect people and animals.

There are familiar species that will bring a little wild into your home. The Colorado House Rabbit Society has more information about rabbits than seems humanely possible (you read that right). Over the decades, bunnies have transitioned from wild animals to domestic pets akin to cats and dogs. The type and variety of rabbits is spectacular; there are over 60 types of pet rabbits. They can be litterbox trained, spend time hopping around your house, and can learn to love the companionship of guardians and other pets.

Rabbits, however, love to chew on electrical cords. I found this out the hard way when we adopted an office rabbit. My assistants let Funny Bunny roam somewhat supervised during the day. Every morning when I came to work there was a new problem with an electrical appliance. I discovered the culprit when I found Funny contentedly chewing on my lamp cord. I knew a lot about dogs and cats, but I had neglected to do my homework on rabbits.

If you are set on adopting an unusual small mammal, hedgehogs can be kept as pets. These small mammals take more care and resources than more common pets, but they can be rewarding companions. The Hedgehog Welfare Society has loads of great information about hedgehog keeping. These little guys have numerous special needs for food, bedding, grooming, parasite care, playing and simply survival. Don’t make the mistake I made with Funny.

Know the laws that regulate the keeping of exotic species. Kent Drotar, Public Relations Director for the Wild Animal Sanctuary encourages people to check with State, County and City regulations. “Colorado Parks and Wildlife (CPW) established strict regulations pertaining to owning wildlife nearly 40 years ago,” Drotar says. These regulations prohibit the owning of lions, and tigers, and bears, wolves, primates and pretty much any threatening wild species in Colorado. “Non-threatening” species such as Ostrich, Camel, Llama require a special license. Don’t assume that because it is cool it is legal.

Some very “cool” pets have been christened “herptiles”. These are cold-blooded reptiles and amphibians. Snakes, lizards, frogs, chameleons, geckos, and turtles are all pets available and regulated in Colorado by PACFA. These beautiful and unusual pets can be rewarding to own with the proper care and knowledge. One of the best places to gain this knowledge is a rescue organization.

Bindi, the Woma Python, was recently surrendered to NoCoHS. This species is not usually kept as a pet and can only be properly seen in zoos. Bindi hadn’t eaten in six months and was aggressive, a common problem with snakes when they are kept in inappropriate habitat. Within three weeks in proper environmental conditions and a vet visit she was eating like the proverbial horse. When she is up to good weight and comfortable with people she will go to a new home or educational organization. This is the kind of help and guidance you can receive from knowledgeable enthusiasts who really care about these animals.

There are more happy endings for exotics in our state. The Wild Animal Sanctuary in Keenesburg, Colorado is literally filled with “ego pets” rescued from roadside zoos, private collectors, and hoarders. Lions, tigers, bears, wolves, and primates are not pets. These animals have been through the very worst that humans can do to animals. People buy these beautiful, wild animals because they are cool. They use them as status symbols. The “zoos” use them to attract customers. These “pets” are kept in small cages, basements and even trailers. They are isolated from their own kind, socially deprived and when they lash out or become too big, are abandoned or euthanized. The lucky ones find their way to places like the Wild Animal Sanctuary. We are lucky to have this internationally renowned organization in Colorado.

The Sanctuary has purchased a 35-acre Refuge in Southern Colorado. Two “Tiger Brothers” and their lion friend have been released into the Refuge. It is heartwarming to see these three companions playing, exploring, and enjoying freedom. This project will ensure that the Sanctuary can continue to rescue and rehabilitate abused and abandoned animals for many years to come.

Dogs and cats have chosen to partner with us. Exotic animals have not.

Dedication to the species, a thirst for knowledge and the resources to care for and keep these animals are prerequisites for taking them into your family. It is the least we can do.

View all posts by Kate Myers →