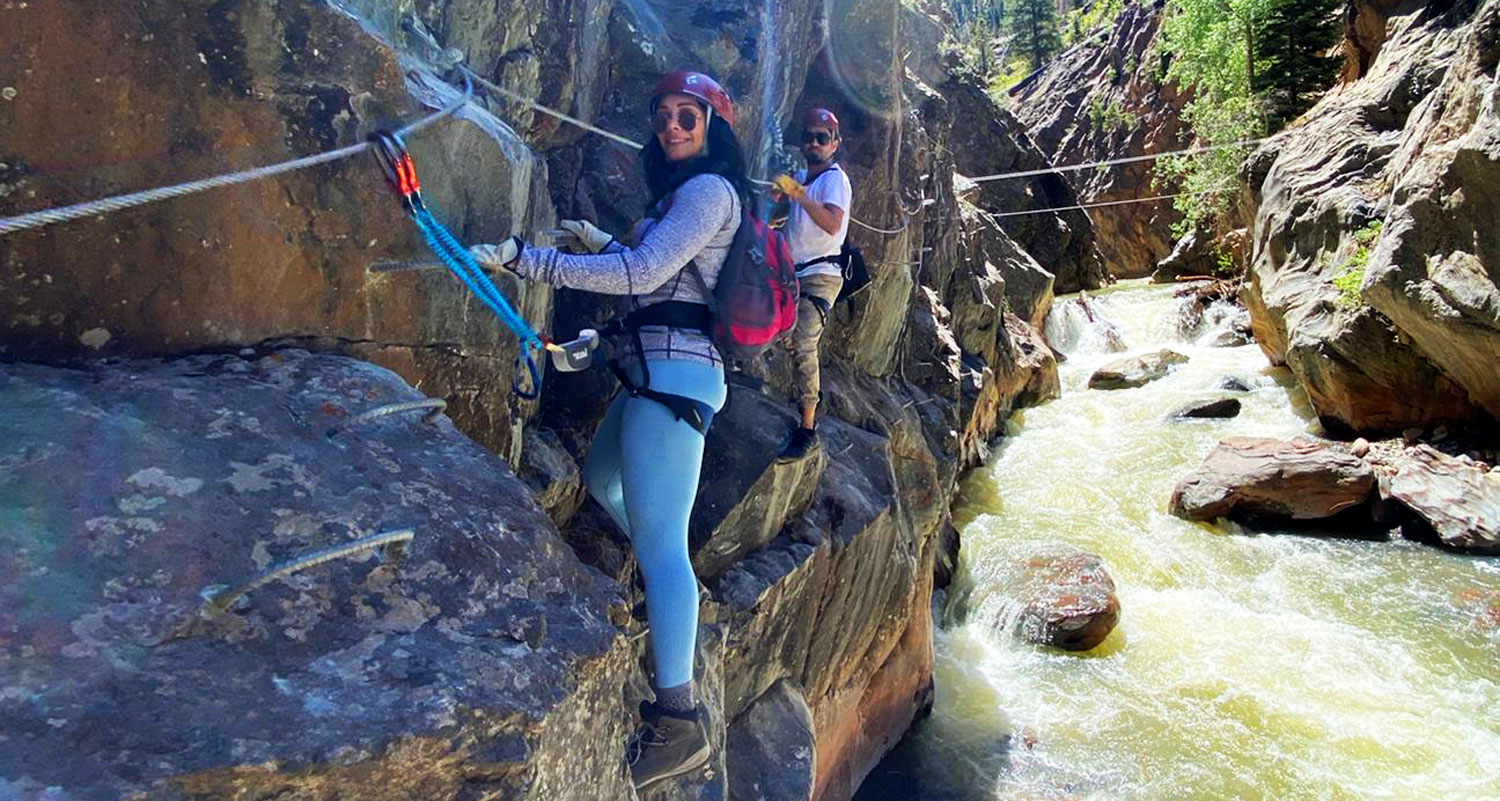 I was halfway up an ascent called “Stairway to Heaven” when I realised, “I really could die doing this”. The posted signs warning you of the possibility of death, the required safety gear (gloves, helmet, harness, footwear), and the liability waivers had all suggested [read: clearly stated] as much. I guess I hadn’t wanted to believe it. But…

As I stood there staring up into the sun and sky above, my friend Kaley climbing with incredible ease, floating as up to the heavens while I could already feel the struggle in my arms, our guide, Clint, from Mobius Engineering leading the way, my perspective changed. Imagine me – studious editor at Yellow Scene, moderately adventurous guy, who’s never done serious rock climbing or been strapped to a wall – having the temerity to look down beneath me first 15, then 25, then 35, then 50 feet as I rose on the rock face, staring down at the rushing water of the Uncompahgre river crashing against the rock. It was very real. 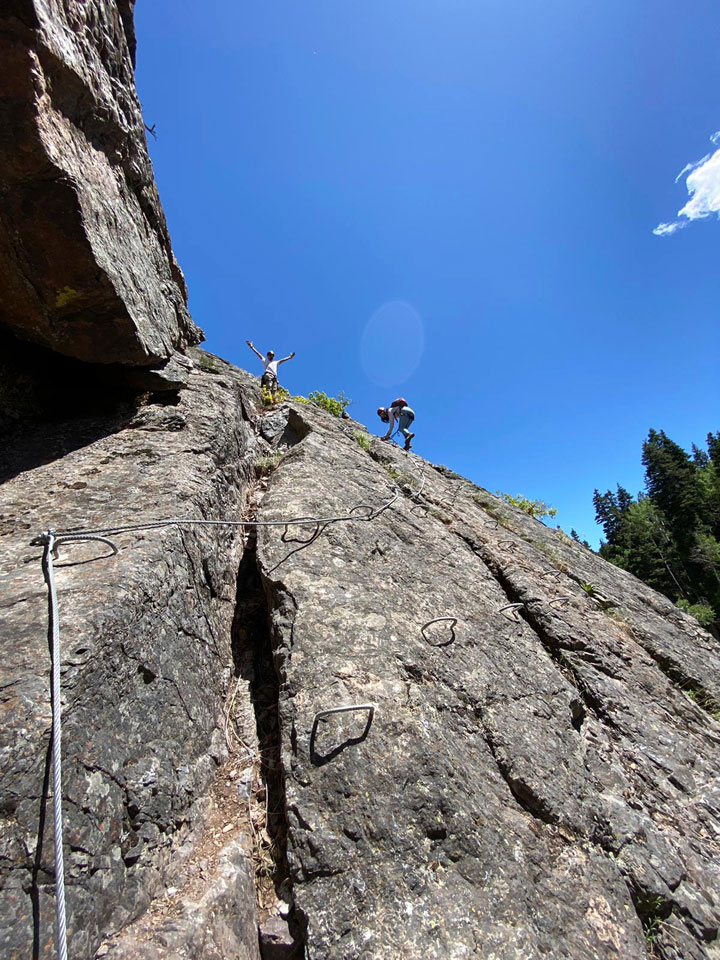 The Uncompahgre River, FlyFisherman.com writes, is birthed “out of Lake Como high in the windswept San Juan Mountains and slogs northward through the towns of Ouray, Ridgway, and Montrose as it makes its 75 mile voyage toward a rendezvous with the Gunnison River in Delta. In the language of the Ute Indians, the original stewards of this spectacular swath of God’s creation, ‘Uncompahgre’ translates to ‘red water spring’ and is likely a reference to several natural hot springs near Ouray and Ridgway.”

While that history is incredibly fascinating for the Native American and the nerd in me, the howl and rush of its waters, crashing and dancing between boulders and fell logs in the gorge beneath me, was the most important consideration for the moment.

For our inaugural Adrenaline Issue, we felt that experiencing Colorado’s latest adrenaline attraction might be the ticket. What is it? Easy. Just a rock face climb / hike completed over 2-4 hours (depending on experience) while dangling precariously above the river and across from the gorgeous rock faces that serve every winter as the Ice Park facades, attached via suspension cables. Of course, we know Colorado is very into adrenaline sports so, for many of you, this might not be enough to get your engines seriously revving. We’re guessing that, regardless of skills or experience, this will still be a fun outing and a great workout for everyone.

The new via ferrata, the first in America that meets both US and EU standards for construction and safety, opened to the general public on Memorial Day in the Switzerland of America, Ouray, Colorado. Let’s review our experiences in Ouray, since we were there for our Winter Travel Loop back in late 2019.

Holy, Colorado, once again, this place makes me hold my breath and scream inside. This remains the most spectacular place I’ve visited in Colorado, even if only a mere 7,800 feet above sea level. In a state enamored of 14ers, I love that Ouray is this impressive. We first made it to Ouray last December in wintry darkness, with no idea of the beauty that existed just outside the doors of our lodge till morning light.

Arriving this trip in the early evening, appreciative of the late sun given the massive walls of the box canyon that rise around Ouray on all sides, we were able to grab food and drive up to the climbers memorial at the Ice Park entrance for a preview of the cables and iron supports that stretch through the gorge. I wanted to psyche myself up for the next day’s adventure, and I also wanted Kaley to understand what I had talked her into doing. She’s not a rock climber either, though fancies herself adventurous. I just needed her prepared. Kaley, FYI, was my companion climber for the weekend. She fancies herself an adventurous person and is a personal trainer in Denver, so feel free to hit her up for workouts.

On this visit we were very happy to stay with the wonderful folks at Twin Peaks Lodge and Hot Springs. It’s an old place, kept up very well. “Alfred Armstrong’s two story residence was built in 1893 on the north side of Third Avenue. Today it is the foundation of the Twin Peaks Lodge & Hot Springs. In 1901, Alf Armstrong purchased four lots for one thousand five hundred dollars. He began our history on one of them.” Thank you, sir. We appreciate it.

For us, it was a haven, a home, a respite from exhaustion. We danced in front of the bathroom mirror, jumped on the beds, drank beers in the bathtub, and enjoyed the local cuisine while unwinding. We also did our best to leave the room clean. Who doesn’t love a great lodge to relax in? We may enjoy luxury towels at a resort, but we relish the rugged goodness of mountain lodges just as much. And with their serious COVID-19 precautions we felt incredibly safe and taken care of. There’s a self check in kiosk in the lobby, all the staff are in masks, and there are spacing requirements and capacity limits for the indoor and outdoor pools. Hint: the indoor pool is adults only. Have fun, folks.

The morning of our climb, I yawned myself awake wrapped in a gloriously soft comforter, the sounds of Kaley already doing her makeup in the mirror reminding me that I’m lazy, a whisper of sunlight kissing me through the blinds. I wake and squint, remembering it’s not just vacation but an opportunity to experience something new and terrifying for my basement dwelling, office based existence. I shower while the coffee brews, pour a cup, and I step out into the sunshine.

“With spectacular 13,000-foot snowcapped peaks surrounding it and hundreds of miles of historic trails, sulfur-free hot springs, the world-famous Ouray Ice Park and other singular adventures all within walking distance of downtown, the town has earned its two monikers: ‘The Switzerland of America’ and ‘The Outdoor Recreation Capital of Colorado.’” There’s no serious snow today, though the very tops of the distant peaks are still clearly snow covered. We grab a small bite and head out. But we have time. What to do while we wait for go time?

Cascade Falls Park is a 5 minute drive from Twin Peaks, and 10 from the entrance to the Via Ferrata. “The Lower Cascade Falls trail is rated an easy hike, which takes you up to the base and last in a series of seven waterfalls that carries snowmelt off the mountains and down one of two flumes through Ouray. The Falls are high in the redstone cliffs overlooking Ouray, and can be seen from many vantage points around the city. The lower trail is short, but steep. The trailhead starts at a parking area at the east end of Eighth Avenue. Several interpretive brochures are available to enhance the hikers experience.”

Let me be clear that we skipped the hike, opting for the lowest level views and some touristy selfies. The falls are gorgeous and I’m officially interested in a full seven falls hike, if that’s a thing. Satisfied with our tourist fun and the caffeine having me ready to go, we went to meet Clint, of Mobius Engineering, over at San Juan Mountain Guides. He had spent the prior day with his teen daughter installing the safety signage. Kaley wasn’t too thrilled to hear they just “completed” it yesterday. “Did they have time to test everything,” she asks. 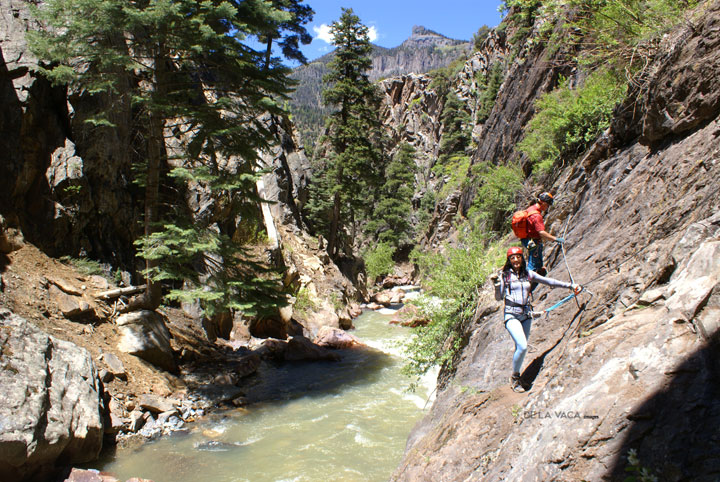 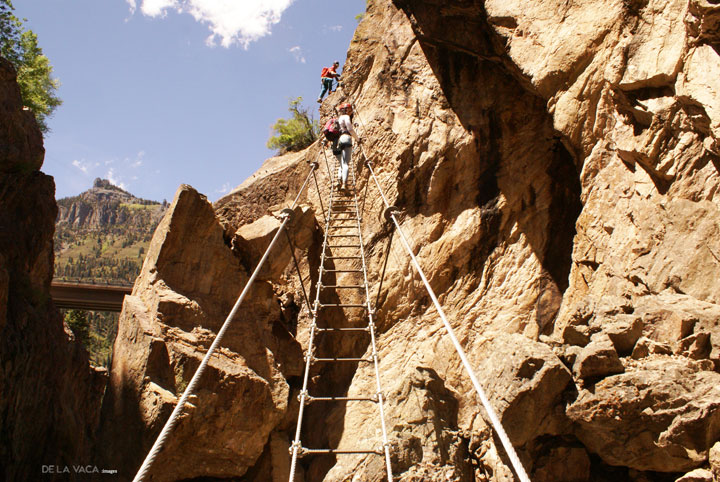 The Ouray Via Ferrata project is the only one in North America that meets US and European engineering standards: “In fact, the Ouray Via Ferrata is expected to be the first free public Via Ferrata in the US built to modern safety standards.” Via Ferrata were invented in Europe, the modern iteration of which were specifically for troop movement, though impermanent versions were already in use. Italian for “iron path”, a Via Ferrata is a protected climbing route found in the Alps and other areas throughout the world. A few facts about the Ouray Via Ferrata. It has, according to the website, but which I’m perfectly happy to confirm:

• one 35? long cable wire bridge across the Uncompahgre Gorge at the South end start of the route, and

• one ascending “Sky Bridge” at the North end of the route spanning the gorge for approximately 75? at 35 degrees in angle

• a wide variety of vertical and horizontal route sections with interesting and varied movement designed, implemented, and installed by local climbing professionals and engineers

• a fantastic opportunity to experience the beauty and majesty of the world famous Uncompahgre Gorge in the summertime!

It’s one thing to read about it, and a whole other thing to experience it. Dangling from a wire, your hands tiring, the sun beating down, your guide explaining the ins and outs, the movements, the danger points. There are a few areas to stop for a good rest, including one bench for the weary (yes, I sat there for a while). What’s fun is the controlled fear: precarious footsteps, dangerous heights, switching your harness from cable to cable, and the wire bridges shaking under your feet as you move across.

The Via Ferrata is an absolutely heart pounding, muscle tiring, danger providing, adrenaline heavy good time. It’ll have you moving between elation and concern, going from this is easy” to “can I do this?” It’ll have you eyeing the finish line bridge in the distance and keeping track of emergency exits. It’ll make you appreciate the pauses. We can’t recommend it more. And we can also recommend all the ways Colorado celebrates its need for adrenaline. Go hike, rock climb, sky dive, raft, camp, throw an ax, or mountain bike. It’s all there for you in this wondrous state we’re lucky to call home.

We finished the night off with a bathtub soak and some beers. While Twin Peaks has gorgeous pools, we were too late and still wanted to soak the muscles. After a day in the sundrenched climbs (yes, I’m brown and underestimated my need for sunblock) and the exhaustion setting in from the travel, this soak was needed.

Afterward, reveling in that excellent exhaustion from a day of badass adventure, Kaley spotted the foxes that frequent the area. On my last visit two absolutely gorgeous foxes came to relax on a small mound near our hot tub, under the moonlight, as a light snow began to fall. This time, my friend Snow White [Kaley] went down and fed one. It ate right out of her hand. I reminded her we shouldn’t feed wildlife, but the deed was done. And it was magical.

Ouray is something truly special. And that Via Ferrata is absolutely badass. Make sure you get up there today. By the way, Kaley loved it. Her words, if I recall correctly, were, “I found a new sport I love”. Glad we could help.

Note: As of press time, opening dates and guidelines when in person-businesses would open were in flux. Many were waiting for expected guidance from state and local governments as well as medical guidance.