Local University of Colorado, Boulder, professor Phil Graves has found himself in the center of an internet storm, the sort of which has been made famous in the internet of #BlackLivesMatter and internet call outs. He was online discussing racism, based on screenshots shared by the Boulder County Democratic Party – reshared 60 times with over 100 comments so far (and downloaded and reposted by others) – and chose to state clearly that “blacks are more likely to commit crimes”, an age old trope rooted as much in official stats (based on increased policing in POC communities) as it is in theories of poverty. Recent research out of Chicago indicated that police are more likely to use lethal force against Blacks than Whites, in spite of the amount of resistance offered. That is, when White people resist, even violently, they are aprehended safely in higher rates. Graves incorrectly claimed that black people are 9x more likely to commit crimes, and then referred to “black on black” crime as his evidence. 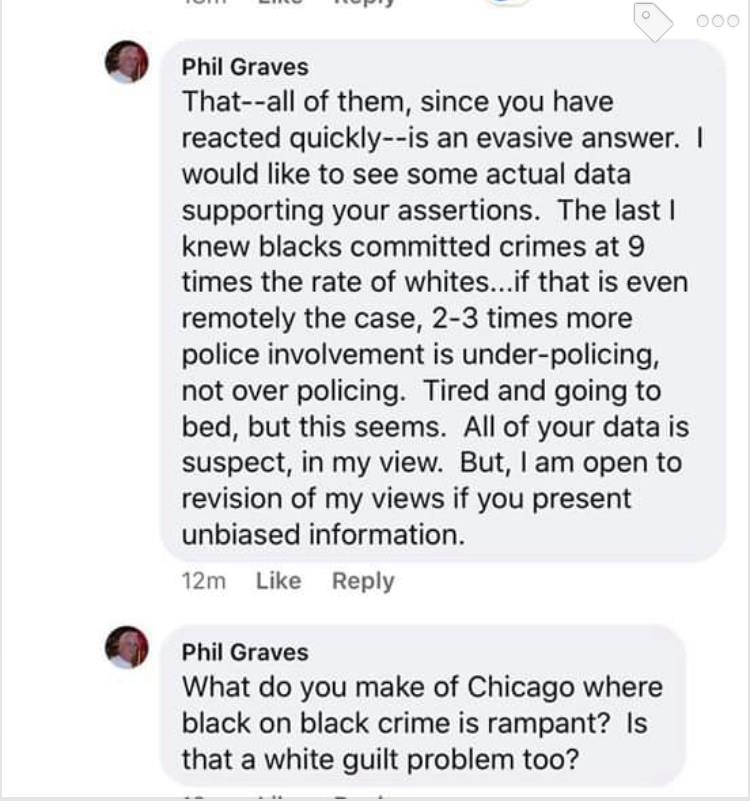 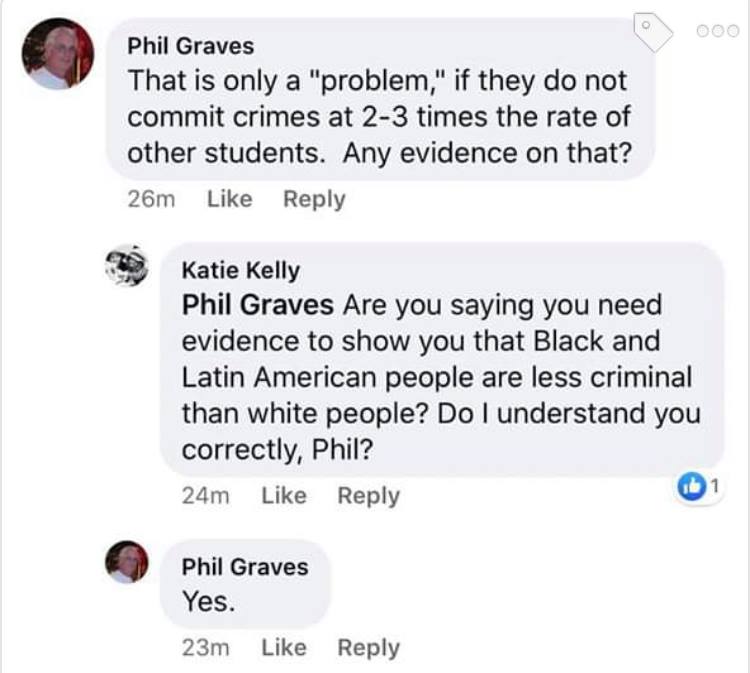 On another post, indicating a level of sexism and racism that many found disgusting, he made the “joke” that Representative Alexandria Ocasio-Cortez was pretty hot for a bartender, albeit “not too bright”. It should be noted that she won her first re-election campaign tonight, facing three challengers, with a vote percentage exceeding 70 percent. 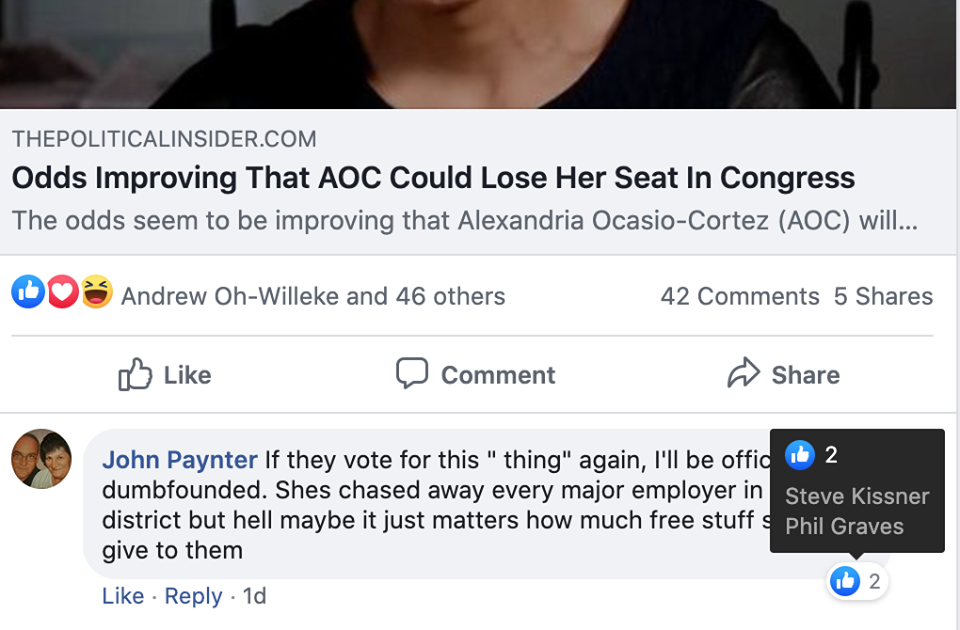 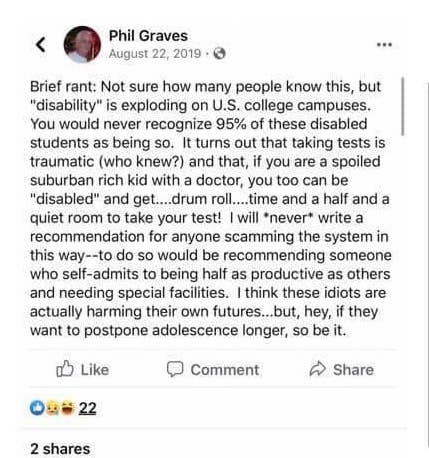 On another post he made, he cited that “disabilities were popping up on Campus” because spoiled, rich kids can get a note from their doctor.

This exchange resulted in Professor Graves’ comments being shared on the Boulder County Democrats page, followed by a flurry of local residents concerned about a CU professor citing incorrect data regarding black crime, as well as inferring black people are more criminal, as well as condeming his sexism against a woman of color. Yellow Scene columnist and local Boulder lawyer, Darren O’Connor, is a case in point: 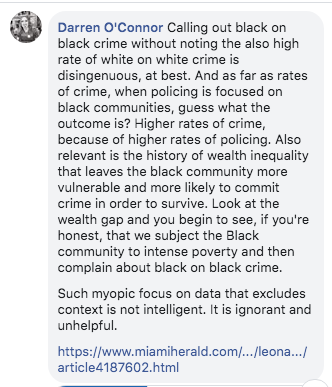 Boulder County Democrats’ Facebook page attempted to clarify his intellectual failures around the Black-on-Black crime trope for him but he chose to claim that he was being persecuted – targeted by people without a sense of humor – by turning to his own social media page claiming to be attacked for a “joke”. We don’t find his comments funny. Others did.

<UPDATE: Since this story broke, Mr. Graves has scrubbed this post and many others. We made a copy of the post on June 23rd, 2020.>

Some of his supporter’s comments include:

“You can’t handle me. I thought black women were stronger than this I guess you are not fully black”

“Are you not accepting my identity?”

“Talking bout Egypt not America, yet chocolate people like you want to erase history go turn purple somewhere else”

While Mr. Graves assures us he is neither sexist or racist, he made no comments to the person making these statements. 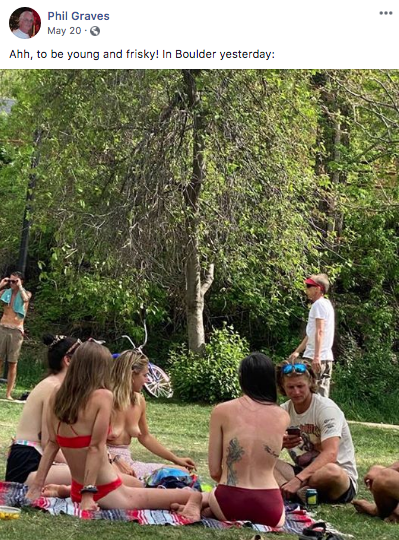 In addition to citing debunked statements about “black on black crime” he also posted pictures of topless women with the caption; “Ahhh, to be young and frisky! In Boulder yesterday”

While we should not have to provide a University of Colorado professor with actual research on the subject of crime, we have gone ahead and done the work for him since he seems to be citing rhetoric more than fact.

Per The Root article cited for Prof. Graves:

According to the FBI’s uniform crime-reporting data for 2016, 90.1 percent of black victims of homicide were killed by other blacks, while 83.5 percent of whites were killed by other whites. While no life is inconsequential, the statistical evidence shows that—just as for blacks when it comes to black-on-black crime—whites are mostly victimized by other whites, with the vast majority of white murders committed by whites. This is because most victims of crime personally know their assailants. And while this is a truth across racial boundaries, no one ever talks about “white-on-white crime.”

U.S. Department of Justice: Race and Hispanic Origin of Victims and Offenders

All of which brings us to the new data from Chicago about police and the use of force. As in other areas of the criminal-justice system where we find racial disparities, defenders of the status quo sometimes claim that cops are more aggressive with black people because black people are more likely to resist. Data journalist Rob Arthur crunched the numbers and reported what he found at Slate:

A new cache of data released by the Chicago Police Department, however, shows that the claim that black people are more likely to face police violence because of noncompliance is itself a dreadful myth. According to the new numbers, Chicago police officers used more force against black citizens, on average, than any other race—even though black citizens tended to exercise less resistance than whites. Under the same circumstances and faced with the same level of danger, cops tended to resolve the situation without firing their weapons much more often for white citizens than black citizens. This analysis was based on Chicago PD’s own descriptions of the incidents in question …
Using the data acquired by the Invisible Institute, I quantified the level of resistance along a simple scale, ranging from passive resistance to attacking an officer with a deadly weapon. I also measured level of force along a range from physical restraint to shooting at the subject. I converted these levels to a simple scale … Ultimately, comparing the two scales, officers tended to use more force against black subjects even though they presented less resistance than white subjects.

The Justice Department statistics, based on the Police-Public Contact Survey, show that “relatively more black drivers (12.8%) than white (9.8%) and Hispanic (10.4%) drivers were pulled over in a traffic stop during their most recent contact with police.” Or, to frame it another way: A black driver is about 31 percent more likely to be pulled over than a white driver, or about 23 percent more likely than a Hispanic driver. “Driving while black” is, indeed, a measurable phenomenon.

While we agree that Mr. Graves has the right to free speech, making erroneous and biased claims about people will result in public feedback. And racist, sexist comments by a professor are something his department heads, and University administration should absolutely look at. Does anyone want a professor who makes racist, sexist, college girl social media posts on campus? We find it hard to believe many would.

It’s not harassment Mr. Graves, and it’s not people without a sense of humor: it’s the public exercising their own free speech, and their right to exist in a world free of harassment. They don’t think you are “funny”.