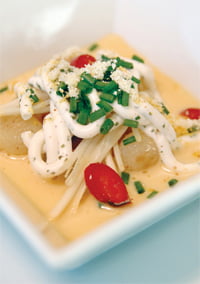 Offering a chef a simple ingredient gives insight into his or her creativity, which is the calling card of any gourmet cook. So we were interested to see what Ian Kleinman of O’s Restaurant in the Westin Westminster would whip up for us when we presented him a basic red potato as this month’s Challenging Element. As usual, we gave him 24 hours to wow us before we returned with camera, notepad and the challenge to keep the creation on the menu for the entire month. Using culinary skills and a dash of science fiction, he presented a unique Baked Potato Soup.

Ian Kleinman’s kitchen at O’s Restaurant is as much a culinary center as it is a science lab. Kleinman, the steak and seafood house’s executive chef of the last two years, practices a form of molecular cooking. A little more than a year ago, he purchased about $1,000 in chemicals (natural and safe, he assures) and began experimenting with them in the kitchen.

Using these chemicals, he can transform the texture of virtually every type of food—a pineapple curry with the consistency of bubble gum, for example. Every weekend, he offers a tasting menu complete with dishes fit for a sci-fi flick.

The agents of change for this special menu: Activa, calcium bicarbonate, liquid nitrogen and more.

To make his Baked Potato Soup, he changed the complexion of sour cream to make it a noodle centerpiece of the dish. He made sou-vide red potatoes, meaning they were cooked at a low temperature in an airtight setting.

The soup starts with a smoked cheddar broth that just covers the bottom of the bowl before the potato, enoki mushrooms and noodles are added. It’s topped with a dehydrated red potato and popcorn powder.
The intent is to mimic a baked potato. Try it with a porterhouse, he suggests.

The broth’s cheddar flavor is unmistakable, serving as the dish’s dominant taste. The noodles taste exactly like sour cream, with a slightly softer texture than typical spaghetti. The potato soaks it all up.

The soup is like eating a potato and lathering each bite with all the fixings. That is to say it’s an absolute delight.

It has us wondering about his other molecular creations and the weekend tasting menu. Kleinman is on the cutting edge when it comes to his cooking style, yet these are the types of creations that have traditionalists rolling their eyes.

We’re all for it, though. Because when a chef creates such a dazzling dish out of the ever-so-plain red potato, we’re not going to argue the methods.

Taste the Baked Potato Soup through May 30 at O’s Restaurant at the Westin Westminster, 10600 Westminster Boulevard. Call 303.410.5000 for info or reservations. Learn more about Ian Kleinman’s work at his blog, Food102.