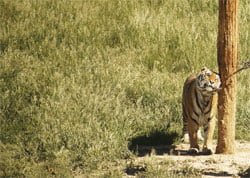 Babe repeatedly ran away from the back porch she slept on in Oregon. Kamal and Diesel were living out of a car. Honey and Irwin called a Texas truck stop home. Not ideal living circumstances, especially when you’re living in a foreign land, young and growing toward 825 pounds.
But all of these tigers, born in captivity and privately owned (many illegally) found their way to an orphanage of sorts: the 280-acre Wild Animal Sanctuary in Keenesburg, northeast of Brighton.

The sanctuary began rescuing large cats, bears and wolves nearly 30 years ago and is currently home to more than 150 animals, nearly half of them tigers.

“We just give them room service and maid service as long as they live, and Medicare,” says Toni Scalera, Sanctuary director of development.

But in 2005, the humans who run this vast operation came upon something its animals were familiar with: hard times. Like many non profits that year, the Sanctuary saw its donations dwindle as contributions were diverted to victims of Hurricane Katrina. Beyond spending nearly $400,000 annually to feed the animals, the facility also needed cash for another 80 acres to buffer residential growth to the north.

The Sanctuary launched an e-mail campaign to solicit donations—and it worked, twice. Earlier this year, donors came through with the funds necessary to purchase the land. Consider the sanctuary, and its residents, saved.

With plans for an on-site vet clinic, and the recent arrival of 15 bears from Ohio, the future looks bigger and brighter than ever—especially to child visiting the Sanctuary, hoping for a little more than a trip to the zoo.
Visitors are treated to lions, leopards, bears and other animals brought from all over the country to live in large double-fenced pens where they can climb on concrete platforms and tree branches. They even get to swim in one of the many hot-tub sized pools.

It’s a drastic improvement over their previous circumstances where some were kept as pets. One transplanted African Serval, a spotted cat about the size of a Labrador, was suffering in a New York City apartment. Her claws were removed and teeth filed down for domestication purposes. Other exotic animals were used as for-profit entertainment before being abandoned by overwhelmed owners or confiscated by law enforcement tipped by worried neighbors.

It seems there are many who think a pet tiger is a good idea; it’s a status symbol perhaps akin to that of owning a muscular pit bull. Although when the owner-animal relationship invariably takes a turn for the worse during the wild animals’ maturation process, a tiger can become a whole lot more dangerous than a lock-jawed dog.

The Sanctuary estimates that there are 30,000 large, meat-eating mammals in captivity (not including zoos) across the country, including 15,000 tigers.

“I think everybody is fascinated by these animals because they’re icons of the animal kingdom. They’re beautiful. They’re majestic. They’re wild, and I think people are attracted to that,” Scalera says. “But at the same time, there’s a reason God put bears in the woods, lions on the Savanna, tigers in the forest and in Siberia. They’re fierce and dangerous predators, and no matter what they get trained, there can always come a time when they can return to their natural instincts.”

The Sanctuary is one of the few places in the country where exotic animals can retire from “pet” status. The five full-time staff members work with zoos, which have their own breeding programs and don’t generally want the extra animals, other sanctuaries, and the U.S. Department of Agriculture to find suitable homes throughout the U.S. and Mexico.

The accommodations here are better than a zoo in many ways—for both the Sanctuary’s animal inhabitants and the humans who come to marvel at them.

Since opening to the public almost four years ago, visitors can plunk down a $10 donation to visit the education center then gaze out from one of the two observation decks onto the Sanctuary’s plains to watch the now happy animals soaking in the sun.

Between the learning and looking, visitors get an up-close look from an elevated walkway about 18 feet above many of the big cats’ pens.

This is the proper distance to watch these beautiful predators.

“Careful,” Scalera cautions a woman who’s on her hands and knees trying to take a picture through the walkway’s wooden planks of a tiger below. Apparently it’s safe to squat above a tiger, but the jaguars and leopards would be likely to jump up and catch a wayward necklace or loose strand of hair.

It’s a wonder anyone would think it smart to keep one cooped up at home in the first place, regardless of how cute they seem.

Wildlife Animal Sanctuary
Best time to go: Early or late in the day.
The animals tend to nap in afternoon heat. Open year round.
Cost: $10 donation for adults, $5 for children