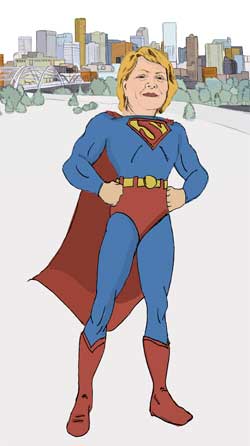 Consider Pat Waak’s first leadership experience a trial by fire, or better yet, a trial by train. Thrown into first aid triage with a group of Bandeirantes (Brazilian Girl Scouts) she was teaching through the Peace Corps, she was called to a train wreck.

The train, carrying passengers from Maceio, Brazil, toppled, disrailing from the tracks. While the injuries to the passengers were minor, the challenge of leading a team of school-aged kids learning Nursing 101 to help the numerous victims was monumental. Waak learned a valuable lesson that day: You can lead anyone into doing tremendous things, no matter the
circumstances.

It is a lesson she has taken very seriously the past four decades, leading the Erie resident to become a major player heading into this month’s Democratic National Convention—an event that will likely turn Denver upside down.

She chairs the state’s Democratic Party and happens to be one of those “Super Delegates,” the party’s elite representatives that factored so heavily during the process of picking Sen. Barack Obama as the Democratic presidential nominee.

Being a super delegate comes with a lot of responsibility, particularly in Colorado during the convention. Consisting of political activists, party stalwarts and office holders, perhaps Waak isn’t the first person who comes to mind when picturing a powerful voice in politics.

“She is not a power broker,” says Sen. Brandon Shaffer, D-Longmont. “She is a consensus builder. She has earned the respect of the business community, activists, all the way down the line through the legislature and the governor’s office.

“Speak softly and carry a big stick” comes to mind.

Working tirelessly behind the scenes, the 65-year-old has been a major force in Colorado’s shift from a Republican stronghold to a swing state.

And she handles it all in stride. She certainly has her hands full this month, attending party events and meetings daily. She will be a part of hosting a big Democrat shindig at the Governor’s Mansion days prior to the convention, perhaps even getting the chance to shake hands with the man of the hour, Barack Obama, the Illinois senator who could become the nation’s first black president.

If, or perhaps more likely, when that meeting happens, it will be a moment years in the making.

Waak has a long and impressive history working in politics. Dating back to her studies of political science at the University of Houston, Waak has enjoyed working campaigns of all shapes and sizes.

She has had doors slammed in her face, working the door-to-door campaign route. “It was pretty traumatic,” she remembers.

Never discouraged, she pushed on—this is, after all, a woman who led Brazilian Girl Scouts to a train wreck.

“It’s my commitment to policy change and my likeness of candidates that attracts me to campaigns and politics,” Waak says.

That dedication has formed an impressive resume, including working with the U.S. Agency for International Development under President Jimmy Carter, as deputy campaign manager for Sargent Shriver’s short-lived 1976 presidential campaign and, most recently, chair of the Colorado Democratic Party. Since taking that post in 2005, she has turned a part-time gig into an important full-time post.

“I quit my paying job,” she says, referring to her post as executive director of an environmental center in Loveland, “and proceeded to travel all over the state and assess what we needed to do to rebuild the infrastructure of the party.”

That dedication has certainly paid off.

“She definitely has taken (the position) to the next level,” Shaffer says. “The thing that Pat Waak was able to do was capture energy and bring new people into the party in a positive way.”