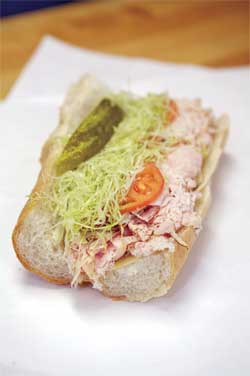 Going to a butcher shop to get your steaks or burgers–not to mention monster sandwiches–is almost quaint, elitist even. But the decidedly blue-collar approach that owners Lee Westcott and Ron Lamb bring to Longmont’s Your Butcher, Frank is intentional. The no frills shop is staffed with men who know their meats and truly believe that customer service is as important as the quality of what they sell. You could say they’re fervent, but they wouldn’t be caught dead using such a frou-frou term.

“We’re a meat market that sells sandwiches,” Ron is fond of saying.

That’s the straight-forward attitude Lamb and Westcott bring to the business they bought from the original Frank 11 years ago (and at which Ron started working in high school). In addition to the usual sandwich ingredients, its homemade ham, chicken or tuna salad, or the BBQ beef or pork are delicious classics.
“We used to make everything ourselves, but we got so busy that something had to give,” Ron says.

That something was a dozen or so salads (potato, slaw, three bean) that they now buy in bulk. It’s still good—not that you’ll have room for a side. Frank’s heaping servings sets it apart from most others. A $6.49 eight-inch sandwich comes piled, and we’re talkin’ sprain-your-jaw piled, with your thinly sliced meat of choice.

From the spicy layers of salami on to the signature Italian to the competing mounds of ham and turkey on the club to a good old pastrami on rye, the mound of meat they serve up  extinguishes even the biggest lunch appetite.

“We pile the meat on ’till it’s bursting,” Ron says. “We’re a blue-collar sandwich shop. I go to fill up guys.”

Veteran patrons call in their orders ahead of time at lunch to avoid the inevitable wait. Note that Frank’s has no place to sit (we said no frills) and snagging a table at the deli next door is taboo.

Instead, lug your sandwich a block south to Roosevelt Park and pull up a picnic table in the shade. You’ll be glad for the walk after tucking into a behemoth sandwich from Your Butcher, Frank.