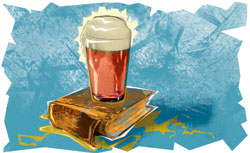 A pub without stories is just a barLacy Boggsby James Burrus
Published on: April 15th, 2009

There are some things that deserve more than plain old derision and public scorn—actions so heinous and loathsome that incredulous ridicule just isn’t quite enough. Like mixing 30-year-old Scotch with 7-Up.

Like cutting the back end off a fully functional ’55 Cadillac to make a couch; like ripping into your grandfather’s stamp collection to cobble together postage for the credit card bill; or—for crying out loud, June!—like cutting hundreds of PERFECTLY GOOD BOOKS in half to decorate a bar!

Who would say yes to such a thing? If your Blink answer was that only a Big City Texan would think it better to root for Dale Jr. from the upholstered trunk of a vintage Caddy than to tool around town in the whole damn thing, you’d be right.

There’s something fundamentally wrong about a value system that makes it OK—cool even—to sacrifice the books themselves in an attempt to impart a warm, comfortable, erudite look and feel to a place. It’s a Madoff library: when you loo k below the surface and discover the profound lack of substance, the disappointment is visceral.

A proper pub (British definition) is first and foremost a social place; a neighborhood chat room where real people—locals even—come to hoist a pint with friends, serve up some piping hot sarcasm and solve the world’s problems before heading home. I’ve been in enough pubs to know that, apart from colorful characters, “traditional” décor isn’t much more than photos of grinning footballers, an autographed shot of a long-passed cricket player, dart boards and the cracked steering wheel from the Aston Martin the bartender wrecked on his 18th birthday. Such things, including your own stash of stuff, would be worthless junk without the back-stories.

Because if you’re going to hang something on the wall of a bar in an attempt to make a pub, it better mean something to your patrons, or what’s the point? [Trademark alert: Here’s the perfect business model for a “theme” pub: Take raw vintage space, put in the basics and ask customers to decorate the place with their own odds-and-ends (a la The Astounding Problem of Andrew Novick). Nothing like creating instant regulars and getting free décor by giving people a place to display their stuff.]

Would-be pubs (like Boulder’s Conor O’Neills and now Baker Street, which recently assimilated the Chili’s on 28th Street) grope for instant character by displaying willy-nilly an untouched assortment of knick-knacks screwed or glued to shelves and gathering dust at an alarming rate.

“Blessed is he who expects nothing, for he shall never be disappointed.”—Benjamin Franklin

If it’s Instant Positive Vibe you want, books are the way to go. Anyone who’s read Adventures of Huckleberry Finn has a vivid and instant point of connection with friends and strangers alike. Sparking conversation about a shared story, character, author or new idea is easy: Just add beer.

The profound disappointment comes from being denied the instant community that books foster. Whether it’s putting out an argument with a copy of Great Moments in Sports or going geek by finding and reading William Wordsworth’s “To a butterfly” to the girl you’re desperate to impress, maiming a library just for looks by gluing and screwing—or worse, cutting in half and gluing and screwing—the books to shelves is shameful. It’s like cementing full bottles of 1982 Saint-Emilion into a wall because you think the labels will look cool.
My Gandhi solution to such biblio-blasphemy is a slow-motion flash mob. If you like a place, bring a book or piece of personal flotsam and leave it on a shelf. Return another day with another thing. Repeat until the place is your own. If on your second visit the first thing’s not there, well…you tried.