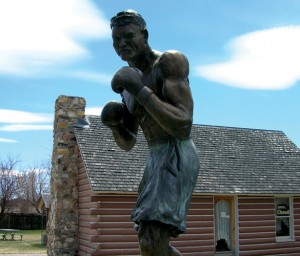 Head down I-25 to Walsenburg, and make your way to Manassa. This tiny town, established by Mormons in the 19th century, was the birthplace of William Harrison “Jack” Dempsey. You can find the cabin in which the boxer was born on Main Street: It’s now the Jack Dempsey Museum and Park. It’s filled with photos that highlight Dempsey’s storied career as well as a pair of his gloves and a statue out front. At nearby towns Romeo, Sanford and Alamosa, you’ll find restaurants such Cavillo’s in Alamosa and hotels.

The next day, take Hwy. 160 to Durango. Stop in Pagosa Springs to eye the shops and have lunch at JJ’s Riverwalk. When you get to Durango, drive past the Central Hotel and the El Rancho Tavern. You’ll notice the huge mural of Dempsey on the side of the building. Some say Dempsey knocked out Andy Malloy in the bar; though, most sources say the fight took place in the Gem Theater, which became the Jarvis Suites Hotel. That’s where you’ll check in.

The Jarvis is just a few blocks away from the Durango and Silverton Narrow Gauge Railroad, so you’ll want to spend one day on the train with a few hours of shopping or lunching in Silverton. Make sure you have drinks at the Strater Hotel’s Office Spiritorium and dinner at the Palace Restaurant; the chef here served as Oprah’s personal chef. After you’ve soaked up the best of Durango, head north to Montrose on U.S. 550 through San Juan National Forest and through the Uncompahgre Gorge. Outside of Montrose, you’ll find Olathe, in which Dempsey once wrestled a local strong man, Big Ed, in a livery stable; the local marshal had apparently intervened and forced Dempsey to wrestle instead of box.

In Montrose, take the tour at the Museum of the Mountain West, which includes stops at the Carriage Works, in which Dempsey trained, and the Moose Lodge, where he fought; great stories about young Harry Dempsey are included. And then drive east on Hwy. 50 to Salida, where Dempsey knocked out Young Hector Conrew three years prior to being named the heavyweight champ. The Salida Elks Club displays a pair of Dempsey’s boxing trunks and the ring bell from his Salida.

On to Cripple Creek, where you’ll check into the Jack Dempsey suite at the Carr Manor Historic Inn; though, he didn’t actually stay there. Dempsey worked in the mines near Cripple Creek and fought at the Lyric Opera House, which has burned down. Visit the Cripple Creek District Museum to see a pair of his gloves and a tribute.

Road Trips – And Countless Adventures on the Open Road