Diamonds in the rough 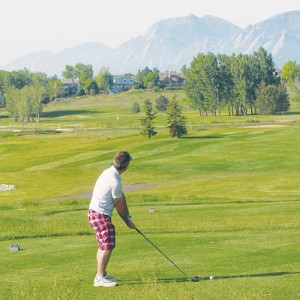 You don’t have to be a golfer for long to realize the truth behind the old saying that the game is nothing more than a good walk spoiled, even if you’ve never walked 18 holes in your life and wouldn’t dream of playing a round without the convenience of a cup holder in an electric cart. You still get the idea, that no matter how high-tech your clubs or expensive your private lessons, there are shots lurking in your future wherein, hoping to smack the ball 400 yards down the course, you’ll whiff it and dribble it out four.

But golfers also know their ability to hit the ball accurately and consistently, a lifelong pursuit, is only part of the equation that results in your score. The other factor is the course itself. Boulder County, for all of its other amenities, is sadly not known for its wide variety of golf courses. But there are a few gems in the rough, so to speak, courses that have unique challenges that might not be immediately obvious. Here’s a quick glance at three, and a glimpse at what lies in store:

“Now what?” I muttered to myself, certain that I was the victim of an optical illusion. Considering that my game up to that point had involved ricocheting my ball off trees, scuffing it off the tee and—just one shot previously—overshooting the green by about 50 yards into ankle-deep rough, it wouldn’t have come as any great surprise to learn that I was hallucinating as well as playing terrible golf.

I’d just chipped out of the rough, happy just to have found my ball in the weeds and cared only about getting it onto the green. I’d popped it out and watched it hit the fringe, take a bounce and then…disappear. Like, completely. Poof. Gone.

Figuring that it had rolled into a depression created by a sprinkler head or something, I bush-whacked out of the jungle and grabbed my putter. But the ball was really gone. My partners stood impatiently by the pin, eager to drop their shots and move on to the next hole.

“You’re not going to believe this, but I just lost my ball,” I said, staring at the manicured turf.

Actually, they did believe it. Lake Valley Golf Club, a member’s-only course in Niwot and one of Boulder County’s hidden 18-hole gems, has a secret that we weren’t aware of when we teed off that morning—the rough is freaking insane. This was revealed after only a few occasions of hitting decent shots just off the fairway and into the first cut of rough, which, on any other course in the world, would pose few challenges. The grass is a little longer, the lie maybe not as great as you’d like, but unless you were behind a tree trunk, you didn’t lose a lot of sleep over landing in the first cut.

Not so at Lake Valley, where the challenge isn’t hitting your ball further up the fairway but finding it in the first place. It’s not so much that the fairways are surrounded by impenetrable marshland. In fact, it’s meticulously sculpted and beautifully landscaped. The rough doesn’t even look so rough, at least not from the tee box, where it’s easy to get the impression that the fairways are much wider than they actually are. It’s only once you follow your ball a foot or two off the fairway that you realize something weird is afoot. And that something weird had swallowed my ball at the very edge of the green.

Membership coordinator Rob Mount told us later that Lake Valley’s ability to eat golf balls comes from the root depth of the grass. And that means that your ball can sink out of sight where you’d least expect it. I found my trusty Nike golf ball literally two inches off the green buried three inches deep in grass. And no, I didn’t have a club for that.

Although Mount said he sometimes gets an earful from members who’ve lost a few sleeves of balls before making the turn, we actually enjoyed it once we figured out that missing the fairway means adding (at least) a stroke per hole to your game. It made it that much more cerebral and allowed me, down by more than a dozen strokes to my cart-mate by the time we teed up on 18, to cinch the match on a foolish “winner-takes-all” bet on his part. That I did it after scoring a triple bogey should tell you all you need to know. We stopped counting my friend’s strokes after 10, while we were still 150 yards out.

Like most golfers, I approach a course’s par-3 holes as opportunities to reel in my score. On every round of golf there are at least a handful of cursed par 4s and nightmare par 5s, holes where nothing goes right.

Par 3s are your safety valve, a chance to snuggle a lofted wedge right up to the pin and, if you’re lucky, tap in a birdie or two for the round, providing a little margin for your ego when you’re replaying the game over beers at the clubhouse. At least that’s how it is at almost every other course in the world except at Longmont’s crown jewel city course, Ute Creek. Here, par 3s can break your game in half. Three of them require you to fly some sort of pond, all of which must be magnetized, because I’ve never been in a group that didn’t sacrifice at least half the tee shots to the drink. Another has a green surrounded by a veritable beach’s worth of sand, backed by a soggy marsh filled with brambles. But it’s Hole #14 that always eats my lunch.

On first glance, it’s nothing special; in fact, it’s one of the more nondescript holes on what is a beautiful, winding course filled with rolling hillocks and reedy gullies interspersed throughout its narrow, dog-legged fairways. But take a closer look: The green is situated atop what appears to be a small mesa, guarded in the front by two giant bunkers, with a ramp of green lolling down between them like a clown’s tongue at the local mini-golf course. It’s not steep by any standard except golf’s. Inevitably, the pin is located at the top of the hill, never on the flatter surface at the back, all but guaranteeing that you can’t stick a shot anywhere near it. Putting pretty much requires that you hit the hole, or you’re rolling back to the fairway. It’s not uncommon to see golfers who hit the green bring their chipping wedges along with their putters.

I’ve never done better than quadruple bogey #14, but every golfer needs to have his White Whale. Like Ahab, I’ve taken to muttering over my shoulder as I head to #15, “For hate’s sake, I spit my last breath at you!”

OK, so this is technically about a mile into Weld County, but since the CU Buffs golf teams practice here, Colorado National is granted Boulder County status, at least for the sake of this article. It’s well worth the visit because it’s maybe the only course in the area that plays like an official Scottish links course.

Situated on high-plains prairie with hardly any trees, Colorado National is susceptible to one of golf’s biggest headaches and one of Colorado’s great scourges—high wind. There are few worse sensations than watching your perfectly driven ball heading up and away toward a distant green and then suddenly take a hard left turn to land on the fairway of an adjacent hole (or worse) thanks to a random 50 mph gust. Shaping long irons around water features and other hazards requires the skills of a meteorologist to figure out precisely when the wind is going to die off long enough to line up your shot and swing.

The solution here is to keep it close to the ground and to make friends with the one club you’ve probably never even swung before, the one that Lee Trevino famously said should be held over your head during lightening storms because not even God could hit it, a 1-iron. Adding to its challenge, a friend who golfs two or three times a week warns newcomers that it “plays very long, especially the par 3s.” And the second cut of rough is generally wild prairie grass that, like Lake Valley, demands you bring along a few extra sleeves of balls since you’ll be sacrificing them to the course.

It’s worth the contribution. Colorado National is billed as the best course in the state and the lack of trees makes for some stunning vistas of the Rocky Mountains. Just make sure to chart the location of the jet stream when you’re booking your tee time. And remember to dust off that 1-iron.