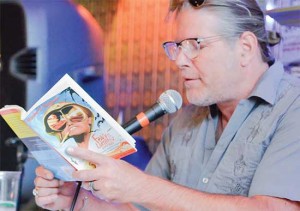 “We were somewhere around Barstow, on the edge of the desert, when the drugs began to take hold …” And so it began, with Hunter S. Thompson’s widow, Anita, launching into the opening chapter of Fear and Loathing in Las Vegas in front of a mostly male crowd echoing the words along with her, many from memory, others from personal, dog-eared copies of various vintages.

Reading Hunter S. Thompson’s writing is akin to having a vividly-composed symphony of images and ideas playing in your head. In addition to the heft and edge contained in the meanings of his carefully chosen words, there are the additional layers of rhythm and melody they possess, the glorious chords of well-crafted sentences. The facts Thompson presented, the ideas he conveyed, the truth he relentlessly sought, and the harsh illumination of the sordid world of the rich and famous and politically powerful was the envy of his fellow journalists who were incapable of doing it justice themselves or too afraid to try.

Hunter’s Gonzo Journalism was the literary punk rock of the 70s and early 80s. Harsh and irreverent to the soft ears of staid, veteran journalists, his careening verbiage was vital, driving and honest to the youngsters eager for a fresh voice that spoke truth to power and backed up outrageous declarations with spot-on reporting.

This symphony was given voice, literally, on July 14 with a cover-to-cover reading of Thompson’s classic Fear and Loathing in Las Vegas: A Savage Journey to the Heart of the American Dream by friends and fans alike. The occasion was to celebrate what would have been the acclaimed Woody Creek icon’s 75th birthday on July 18. It all began with the firing of a ham cannon, but I digress.

A standing-room only crowd gathered in the Library Bar of the Jerome Hotel in Aspen, within easy reach of copious quantities of Chivas and shaved ice (Thompson’s refresher of choice) and launched the reading at noon. A simultaneous reading was conducted by nearly two dozen aficionados at The Station Hollywood in L.A. by former Aspen Daily News editor and Boulder native, Troy Hooper. The Aspen confab was orchestrated by Boulder media consultant Matthew Mosley, author of Dear Dr. Thompson: Felony Murder, Hunter S. Thompson and the Last Gonzo Campaign.

“The rhythm, cadence and texture of the words were everything to Hunter,” Mosely told me after the reading.

The event featured a who’s who of Thompson’s friends, fans, family and collaborators, like wife Anita, son Juan, grandson Will, collected letters editor Curtis Robinson, Aspen Daily News owner Dave Danforth, KBCO DJ Keefer, and Aspen Mayor Mick Ireland, to name a few. There was even a group of old guys who ingested some kind of confection and soon began laughing—giggling like girls is more accurate—uncontrollably during the reading. It was hilariously infectious. We all took turns (I chimed in on Chapter 12) and, despite trying to slow things down (as Hunter would have wanted), we were done in just over six hours.

After drinks and a barbecue at Owl Farm, the gang headed back to town after the sun set and the rains began. In all, Mosely’s initiative to celebrate Hunter’s 75th birthday by reading his iconic book aloud, in a bar, in Aspen, with family and friends and fans present was nothing short of brilliant.