A Not So Big Home

More than a decade ago, Sarah Susanka started a residential revolution: Instead of thinking about square footage and archaic tradition, she thought, we should build smaller, more comfortable houses that emphasize quality over quantity. It’s become her Not So Big revolution. The architect now has nine books published on this idea of living smaller. Not small. Just smaller. More efficient. More livable.

“I saw that when clients came in, they started with the number of square feet and a series of names of rooms,” says Susanka, author of The Not So Big House, Not So Big Remodeling and The Not So Big Life. “But the reality is, they didn’t need the rooms. They wanted them for resale value. So I started by asking them, ‘Where do you live?’ Over 85 percent of clients never needed a formal living or dining room. I realized there is a better blueprint for today’s world.”

The Not So Big idea is about reapportioning dollars from square footage and into character. It’s about abandoning formality and grandiosity in lieu of style and usability. It’s about using every space. When Susanka began her revolution more than a decade ago, much of her charter shocked and scared Realtors and homebuyers. But there has been a slow change in the minds of both homebuyers and real estate professionals. Right-sizing—often used interchangeably with Susanka’s Not So Big idea—is becoming a hot term in architecture and design these days. While right-sizing is not mainstream quite yet, many believe there is potential for it to be more than just a trend.

“The thing that’s happened is that house plans have changed. The formal dining room is much less desired, or at least it’s less formal,” Susanka says. “The formal living room as a requirement is almost gone. The thing that I noticed, real estate professionals were telling homebuyers what they needed, but that’s not even how Realtors are living.”

The numbers reflect this. According to the US Census, average home square footage plateaued at around 2,500 in 2007 and began to drop in 2008. Experts say this was caused by the busted housing market and recession.

Still, in 2011, Realtor.com named Colorado No. 2 on the list of the states with the biggest homes, along with Wyoming, Utah, Montana and Idaho. Truly, the West’s vast expanses of amber waves of grain have given way to suburban sprawl and McMansion-ified cul-de-sacs.

But small is not invisible on the Front Range. Some architects and homebuilders have focused on creating smaller options for residents. Boulder Creek Builders, especially, has “right-size” offerings in a few of its developments.

In the fast-progressing Steel Ranch neighborhood in Louisville, Boulder Creek Builders’ patio homes are not fully constructed, but they are sold out. They range from 2,100 square feet to 2,900 square feet, and while the company developed the homes with empty nesters in mind, young families and single parents have also responded well to a size they say is more manageable. They don’t have formal dining or living rooms, and they don’t have massive master suites. While layouts vary, the patio homes are built with use in mind. The open layout combines a cozy living room, a casual dining room and a luxe kitchen with a breakfast bar and stools. It’s the sort of space that is made for social gatherings. Downstairs, big windows and higher ceilings make the family room bright and modern. There’s crown molding in the bedrooms, a chic stone fireplace and beautiful details everywhere. There are semi-dramatic spaces, but they are warm and charming. 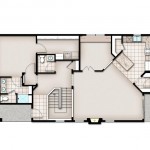 “Bigger isn’t always better,” said Paul Gortzig of Boulder Creek Builders. “It’s not about buying the biggest, baddest house because you can. People want a house that lives better and that’s designed for their real lives.”

The patio homes have some green elements—efficient windows, a tankless water heater, etc. The fact that the homes use space more efficiently and have a smaller physical footprint than many new homes is also a perk for those looking for green features. But Gortzig says it’s more about lifestyle, than just the environmental benefits.

“We design homes how people want to live,” he says. “We call it right-sizing because downsizing has implications that are scary for people. But once they see it, they realize that we are putting the square footage in the right places. There is no wasted space.”

Soon, these types of developments may not be so unique. The National Association of Home Builders expects new homes to continue to stay smaller. Just more than 60 percent of homebuilders estimated that home size in 2015 would average between 2,000 to 2,399 square feet. For those currently living in 4,000-square-foot homes, that may sound horrifying—or just maybe, it could be a blessing.

In Susanka’s theory, homes should be a third smaller than homeowners think they need.

“How do you get that down a third?” she says. “You are living in every space. You are not building more than you need.”