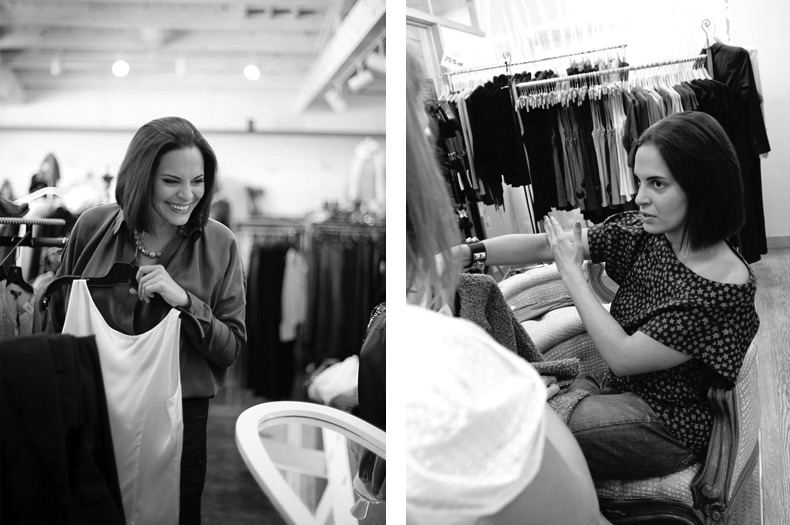 Throughout my life, I have learned this—almost anything can be related to an episode of Seinfeld: Waiting in line at a Chinese restaurant, reading your ex’s lips from across the room, Kenny Rogers, even shopping.

While standing in front of the mirror at Chelsea in Boulder, “The Secretary” episode played in my mind. In it Elaine leaves Barney’s in one of their dresses, convinced their mirrors make her look thinner. After looking at her reflection elsewhere, she returns to the store in time to be caught by the salesperson who insists she buy the dress.

In front of the mirror at Chelsea, I identified with Elaine’s disbelief. I entered the dressing room looking something like J.T. from N’Sync and emerged Justin Timberlake “Bringing Sexy Back.” But unlike Elaine, it wasn’t the mirror. It was the clothes, and the personal stylist.

“A lot of my clients look for my reaction,” Liz Finkelstein said. “They trust me. In a way, I’m their mirror.”

Finkelstein is a New York City transplant who moved to Boulder after leaving her “sensible- shoe” type job in the FBI. Not long after, she turned her styling hobby into a career in the country’s healthiest city—a city that very recently appeared on a different list, one that reads ”Adidas for Fall, Crocs for Spring, and Uggs for Summer:” strike one, two and three that sentenced Boulder to GQ magazine’s top 40 Worst Dressed Cities.

“When I got here,” the owner of Mile High Style said in her office near Pearl Street, “I could tell there was a need for it. So I thought, why not?” The brunette with a slicked-back bun and an empire skirt sat amidst stacks of oversized fashion books, listing off all the necessities every man and woman should have in their closet. She said the reason many Boulderites don’t dress up isn’t because they don’t have anything to wear, but because they feel they don’t have anywhere to wear it to. “Also,” she added, “They don’t want to feel overdressed … My suggestion is to have fewer things and to have better of them.”

Her philosophy on style is the same for both men and women: “impeccable basics.” Of where they should spend the most money, Finkelstein suggests splurging on shoes—and the Georgetown grad who studied psychology might be onto something.

In a recent study, a persons age, gender, income and agreeableness, could be guessed simply by seeing photos of their shoes. Emotional stability was negatively correlated with pointy toes and high heels. A liberal political ideology was negatively correlated with attractiveness, pointy toes and good repair. (Bearing in mind our fondness for Uggs and Crocks, we in Boulder might be rightly pegged as emotionally stable liberals.) But while the study focused only on photos of shoes, Finkelstein says it’s the entire picture that makes the impression.