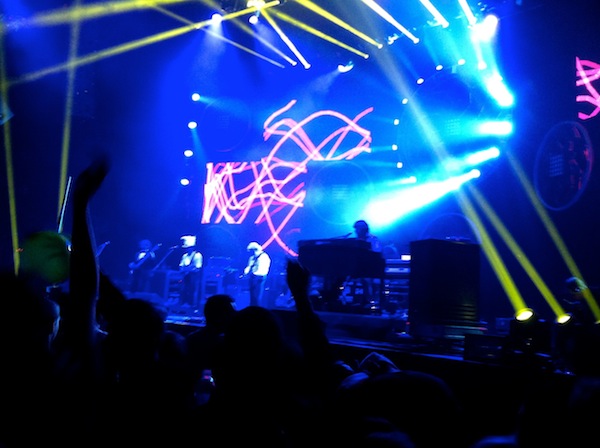 Celebrating 20 years in the making, the String Cheese Incident rang in the New Year with a sold-out show at the 1stBank Center on Tuesday night. For the second year in a row, the Colorado-born jam-band phenomenon delivered three sets of improvisational ingenuity to thousands of diehard fans—making those in the jam-band circuit wonder if the Broomfield New Year’s run will become an annual tradition for the group (think: Phish at Madison Square Garden and  Widespread Panic in Atlanta).

That the Del McCoury Band—a tried and true bluegrass band led by a man who has been cranking out soulful tunes for more than 50 years—would open the show, just felt right. Actually, it was almost as fitting at the swanky tuxedos that all members of SCI would sport for the remainder of the evening.

McCoury and his band opened with “If You Don’t Want Me” and closed with “Sweet Mountain Soul,” sharing a mic for most of the set and never straying from their traditional acoustic sound and heartfelt harmonies.

Helping SCI kick things off with some old bluegrass favorites, The Del McCoury Band stayed on the stage for the beginning of SCI’s first set. Sticking to the acoustic side of things with “Rolling in My Sweet Baby’s Arms” and a high-energy “Shenandoah Breakdown,” it felt like the founding members of SCI were getting back to their roots—when they played bluegrass shows in exchange for ski passes nearly 20 years ago.