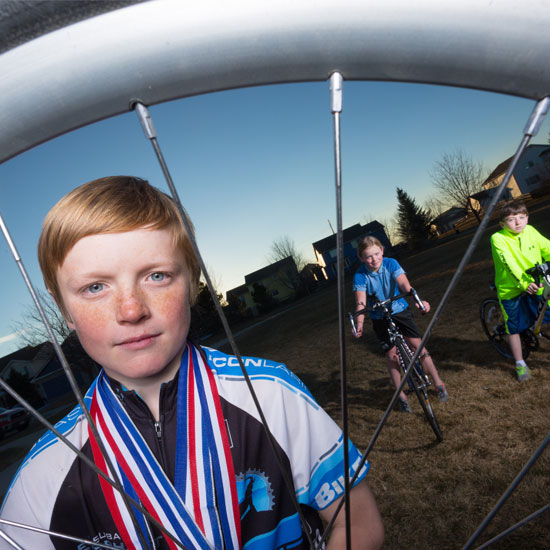 The dog days are meant for chasing down bugs, ice cream trucks and staying outside until the sun sets—-not so much playing Flappy Bird or marathon-ing the Disney Channel.

Whether you’re a five year old or all grown up, this is the time of year to bring your inner rug-rat out of hibernation. To show us the way, we turned to BoCo’s wildest, most imaginative, mountaineering, frog-chasing, puddle-jumping, mini-ranchers and athletes. These kids embody a superhuman appetite for staying active and finding exploits. So as you look to the warmer months, take a cue from munchkins who make adventure a way of life.

It was pretty easygoing at first—-a gradual elevation gain of 200 feet as he peddled along the kid-friendly course. He kept going, until somewhere along the way at the Elephant Rock Cycling Festival, the terrain became more demanding. Now Jack was pushing up outrageous hills, and across dirt roads that surround Castle Rock, for 27 long miles. “I kept riding and riding, and I stopped and realized I was riding with the 20 mile racers!” says Jack, still surprised. By the end of it, the nine year old was passing up riders over twice his age on a route he hadn’t even trained for.

Such is the life of Jack Ahrens.

Born prematurely at 34 weeks, his parents are pretty certain that it was because their son couldn’t wait any longer to get out and start pursuing adventure—which, they say, is the singular best word to describe him. Since his early entrance, Jack has been encouraging others with his pace through and excitement for life.

Along with his sister, Sydney, and best friend Reed Maiocco, Jack is an avid cyclist and triathlete. To help pay for his black Easton road bike, he raised funds by mowing lawns and walking dogs. Rain or shine, he rides a mile to school and home each day of the year. “Well, when it gets icy it’s not as fun,” he explains. “But when it snows over it’s like I’m biking through deep snow, and that’s really fun,” Ahrens says. He has a mountain bike too, which is “specifically so he can ride in any conditions,” explains Jack’s mom, Rhonda. And she does mean any condition.

Last summer, Jack, Reed, and Sydney found themselves riding in knee-deep water when a river running next to one of their favorite bike paths started to overflow. “The water was up to our knees, touching our handlebars,” Reed explains pantomiming the height with his hand. But they kept riding. The more extreme the condition, the happier Jack is. “It’s good to stay fit,” he encourages, “and push yourself harder.”

All of his cycling helps when he pushes himself in triathlons, as well. Without training, he took first place in his age bracket at the Erie Rec Center Triathlon for kids last August. After two laps of swimming, Jack got out at the transition area and dried off before starting the last phase of running. With two people in front of him, he kept calm and turned any nerves he had into more momentum: “I’m calm [during the race] and I talk to myself while I’m running or biking or swimming,” he says. “I tell myself to go harder.” Not letting the pressure get to him, Jack eventually passed the leaders, and as with his race at Elephant Rock, wound up surprising himself with his own accomplishment.

Sydney, who also raced in the triathlon for the first time, says that trying new activities like that helps her feel better all over. “It’s better for your mind for sure,” she says, “sometimes we might play a video game or something but only on a rainy day.”

“I’d rather go play in the puddles,” laughs Jack.