Youth is a drug, and Mother Nature is the dealer. She gives it to you once for free – but after that, it’s going to cost you.

On a sunny Friday in a pine forest just west of the Front Range, Hiroko Hung, 75, and her friend Fusa Wakumoto, 79, are hiking. “It’s good for your health, walking in clean air,” Hiroko says. It shows. The women are svelte, healthy and beautiful in that ageless Japanese way. They’ll live to be 137.

They are scavenging for wild matsutake mushrooms, just as they did as girls, in Japan, after the war. It was one of the few ways to get something to eat that wasn’t rice. Their moms took their hauls and sizzled them with lemon and rice vinegar. They’ve been said to taste like a combination of Red Hots and stinky socks. Today, decades after moving to Jefferson County, that distinct taste teleports them back to childhood. A magic mushroom — and perfectly legal, too.

But it’s not that easy. Matsutakes are rare, and lots of people want them. In Japan, matsutakes are so prized that “captains of industry will give presents of matsutake … [in] carefully gift-wrapped boxes,” writes Langdon Cook in the book The Mushroom Hunters: On the Trail of an Underground America.

You can’t farm matsutake. “The only way you could have a matsutake mushroom farm if if you bought a forest of lodgepole pine and called it a matsutake farm,” says Michael Heim of Boulder High Country Mushrooms, whose business it is to cultivate mushrooms. Pacific Mercantile in Denver, which specializes in Japanese food, told me in late August that they hadn’t gotten any matsutake mushrooms in this season. Finding these mushrooms is nearly as difficult as finding the fountain of youth. 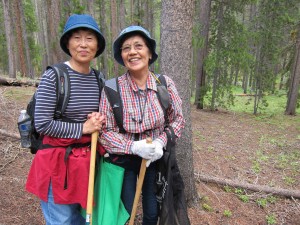 And here’s the competition for Hiroko and Fusa: two short Asian women in track pants and floppy, wide-brimmed hats, with a toy poodle by their side, and a big, two-pound bag of matsutake. (Hiroko and Fusa have found only a couple.) They work quicker than Hiroko and Fusa, all business, stabbing the ground with garden tools as roughly as a Louisiana gravedigger. Other than being annoyingly young — mid-60s, maybe — they don’t look much different. But they are an ocean apart.

A quiet mushroom hunt may seem an odd place for any kind of conflict. Mushroom hunters, besides being the worst-dressed people in the forest, are quiet, cautious and meticulous. Mycophiles see mushrooms as works of art; the forest is their Louvre.

But not everyone’s a purist. Colorado is second only to the Pacific Northwest in terms of mushroom quality and quantity. More people are catching on to the fact that mother nature is a specialty grocery store, and all the price tags read “FREE.”

“More people are excited about wild food,” says Heim, the professional mycologist. “Maybe it tastes better, maybe it doesn’t. But the appeal is the actual hunt. It’s like thrift shopping, when you find that treasure. Or when you’re actually hunting, finding that animal. Knowing that nature was doing this on its own without any input from humans. There’s something romantic about that.”

Pine forests that were once practically empty now swarm with mushroom hunters; the rural roads near them sometimes become parking lots. And there’s just not enough wild mushrooms of any kind — boletus, hawkwings, chanterelles — to make everyone happy. Especially matsutake. In the early 1990s, demand for matsutakes drove prices to $600 a pound. (Prices have dropped since.) With that kind of demand, mushroom in the forests of Northern California became over-picked, and now picking any kind of wild mushroom there is strictly regulated, and in many places totally outlawed. Many blamed Asians and their matsutake fever.

Now, in Colorado, some Anglos worry that Asian-Americans will overpick here, too. And while Fusa and Hiroko see a vast difference between gourmands like themselves and the Korean ladies, the Anglos sometimes lump them all together. “The Asians will drive you nuts,” one mushroom hunter says. Another calls them “pushy,” even to their faces. “We’re not in Asia,” this Anglo mushroom hunter says, when she thinks Fusa and Hiroko ask too many questions. “We’re gonna be nice to other people.”

How it must hurt these sweet Japanese ladies. Hiroko and Fusa walk slowly and carefully. They are delicate. It’s the Koreans, they aver, who are the mercenaries, the poachers, the opportunists.

The most intractable conflicts often occur between people who are indistinguishable to outsiders – Ethiopians and Eritreans, Sunni and Shia, Irish and Northern Irish. And a surprising number of these conflicts involve mushrooms. Germans and French are annoyed by the supposedly aggressive way the Roma people – once known as Gypsies – scavenge for mushrooms in Germany and France. The Dutch think the same about the Poles.

Even if a matsutake grows in the foothills of Colorado, these Japanese people seem to think of it as a Japanese mushroom, to be picked by Japanese people in a Japanese manner – carefully, quietly, like mice on pillows – to be eaten in a simple Japanese dish – rice, soy sauce, vinegar, chopsticks, and pure hearts. Certainly not sold.

I would like to tell you the Korean perspective on matsutake mushroom hunting and picking, but the Korean-American women are not eager to talk. Nor give their names. Nor allow their pictures to be taken. They are either exceedingly shy or they know the stigma others attach to picking mushrooms for money.

But Hiroko – a spitfire – will not leave them alone. She gathers herself. She walks up to the Korean women. She sharpens the knife.

The Korean-American women mumble something without looking up.

Out of earshot of the Korean ladies, Hiroko is righteous.

“They cannot answer!” she says. “Koreans don’t use in their restaurants. They do not eat.”

The forest is free and we all own it. But, in Hiroko’s view, matsutake mercenaries are decimating the Colorado stock of these Japanese mushrooms. And for what? A little money? How does that compare to the pleasure Hiroko gets out of the matsutake? How can that compare to her rush of memories of her mother, a little slice of her long-ago youth, which she trudged through the forest to find?

“We eat them. We cook them,” Hiroko says. “We give them to our friends to make them happy. Friends come over on the porch, and we have matsutake gohan, and they are so happy. But our happiness is taken away by Korean people.”
Warm light slants through tree branches. Nearby, a stream burbles. Edible mushrooms poke out of the ground. Of all the myriad ways to experience the outdoors, I find ethnic conflict to be the most entertaining.