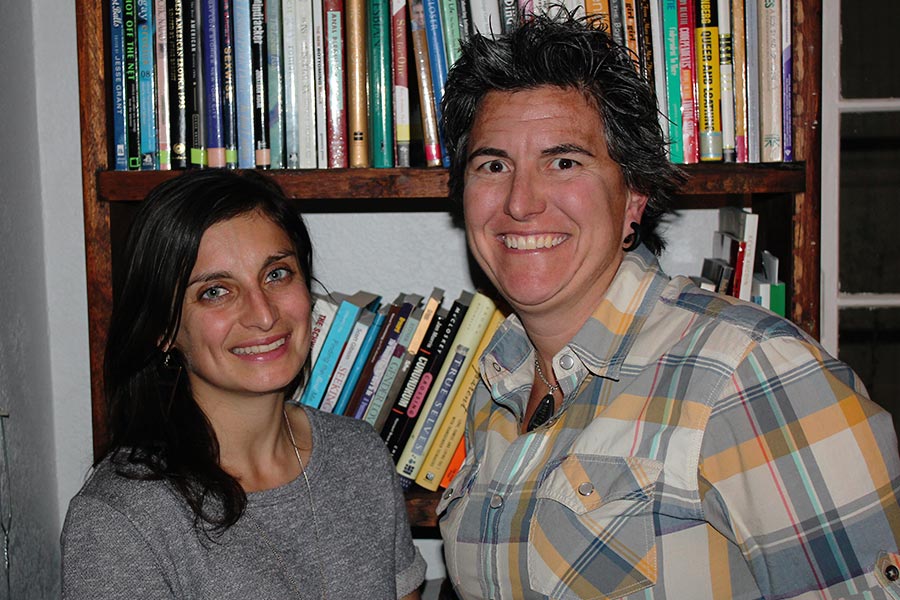 Samantha “Smash” Field and Ash Beckham host a program every week at Out Boulder to get youth involved in sharing their stories.

Sitting off of 14th Street, between Pine and Spruce streets in Boulder, is a tiny house with a rainbow flag proudly swaying on the front porch. Just to the left of the front door is a small white sign with the words “Out Boulder” painted in multicolor. This small house is a haven for the LGBTQ community, both young and old. S

“We have a long road ahead of us, but we also have a lot going on.”

“Over here at Out Boulder we educate, advocate, and provide services, support and programs to Boulder County’s LGBTQ communities,” Executive Director Mardi Moore said. “We have a long road ahead of us, but we also have a lot going on.”

Connecting with queer youth is one of Out Boulders biggest concerns. With young adults being very busy after school as it is, it is sometimes hard to get them involved in after school programs, but Moore along with Samantha “Smash” Field and Sara Connell are working to change this.

The recent Healthy Kids Colorado Survey, which interviewed 40,000 youth in the state of Colorado, tracked that lesbian, gay and bisexual youth are six times more likely to attempt suicide and five times more likely to be forced into sexual intercourse. This isn’t even tracking the transgendered youth.

To be able to reach these kids, the staff at Out Boulder is doing everything they can, including picking them up from school so they have the transportation to the Out Boulder house.

“We have to figure out how to reach these youth and get them in,” Moore said. “We are heading in the right direction but we have a lot of work to do.”

To do this, Field hit the ground running visiting up to fifteen schools in the county talking with Gay Straight Alliances, teachers, therapists and guidance counselors.

“I basically talked to anyone willing to listen to figure out where the need was,” Field said. “Going into the schools gives us a chance to reach those kids who we haven’t reached before, those whose parents may not be supportive.”

From this Out Boulder came up with the two seven-week programs focused towards young adults expressing creativity through writing and performance on Tuesday nights, and journalism and photography on Thursday nights.

The Tuesday class focuses on writing about a topic of their choice to perform in front of an audience at the end of the program. Those involved in the Thursday class are creating a zine and curating a photography show. Although only 12 people, some as young as ten, signed up for the classes, it is still a good starting point.

“It’s a dozen more people than we had when we started, which is a win for us,” Field said.

Field, along with YouTube sensation Ash Beckham sat cozily in the living room of Out Boulder’s house with six young people Tuesday night, brainstorming and helping them create a performance they can be proud of. Surrounding them on every wall were quotes from famous activists.

Beckham, who is known for her Tedx talk “Coming out of your Closet” and her Boulder Ignite speech “I am SO GAY,” was invited by Field to come and help the youth tune in on their performance pieces.

“If you want to know why we need to have gender neutral bathrooms in middle schools, don’t ask a 40 year old lesbian, ask a trans kid who is 13 years old.”

“I feel like the process and self work that comes with these kind of things, not just presenting but getting up and sharing your story is incredibly empowering,” Beckham said. “We need to get up and share our stories with one another to have that empathy, and it so hard to villainize someone who is willing to be vulnerable.”

Beckham, who has worked with youth in the past, knows the importance of hearing their voices and input on important issues. It can be something as small as a comparison of Beliebers and Directioners, or as thoughtful as bullying, or living in the country illegally. No matter what the topic, sharing these stories and connecting with the youth from all different walks of life is what these two programs are doing.

“This is the only organization in town for these kids to get their stories out there,” Beckham said. “If you want to know why we need to have gender neutral bathrooms in middle schools, don’t ask a 40 year old lesbian, ask a trans kid who is 13 years old.”