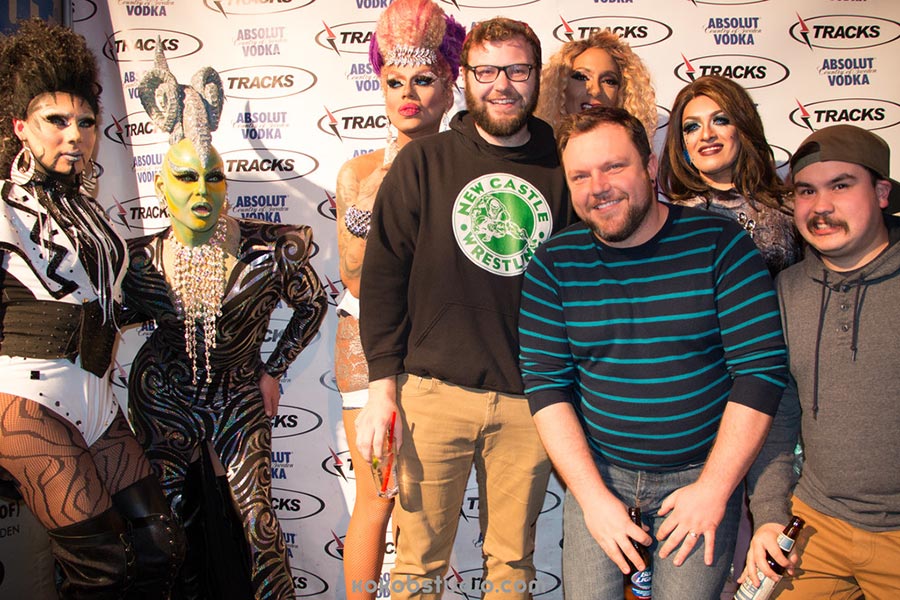 Photo by Koko B Studio

Walking into Tracks, one of Denver’s gay dance clubs, on Friday we experienced a bit of sensory overload. First, the heat in the warehouse-chic building was a sweet release from the frigid Friday night, followed by the welcomed sound of dance music. But the most exciting, and impressive, piece of furniture was the mountain-sized replica of Nina Flowers’ mug stretching into the raptors directly behind the stage with an orange curtain draping down replicating her ponytail. W

For those that don’t know, Nina Flowers, boy name Jorge Luis Flores Sánchez,
is the host of Drag Nation at Tracks, a deejay and a contestant on the first season of RuPaul’s Drag Race and RuPaul’s Drag Race All Stars. We know that she was robbed of claiming the crown on season one, because the queen is one hell of a performer.

Oh, she’s also a long time resident of Denver and she was celebrating her 41st birthday on Friday, and we were lucky enough to be in attendance. Miss Flowers started the night off right. Painted in green and blue and sporting a silver, rams horn headdress. She was feeling the medieval fantasy.

Watching the goddess shuffle across the stage, whipping her arms around and interacting with the crowd was everything. We could have walked out right then and been satisfied, but the show was only starting.

After Flowers sashayed off the stage, Puerto Rican princess Yara Sophia took the stage. Yara Sophia is also drag race royalty reigning from RuPaul’s Drag Race season three and RuPaul’s Drag Race All Stars. Although she didn’t win either season, she stole our hearts and for good reason. During her final performance on Friday, she performed to a slowed down live rendition of “Chandelier” by Sia. She held the audiences attention without the high energy the rest of the show relied on. It was simple and elegant, and we remember why she stole our hearts.

Taking the stage after Yara Sophia was the queen of comedy and YouTube Willam. She may be the only queen to be kicked off of Drag Race for breaking the rules, but her music videos and web show catapulted her into drag queen stardom. She carried her comedy into her performance at Tracks singing a live version of her song “Es Una Pasiva” which is the Spanish version of “Boy is Bottom.” She was good, but nothing to write home about.

In between the Drag Race alum, local queens gave the audience high-energy performances with the help of background dancers. On occasion the back up dancers were more entertaining than the queens. This could be because we prefer gritty, conceptual queens to the choreographed routines.

But there was a stand out in the form of Khry’sta Aal, a local queen who took control of the stage and left her mark. Performing to Jessie J’s “Burning Up” she did everything short of pissing on the stage, letting the audience know that she meant business. She’s a gem in the local drag scene, and even outperformed some of Drag Race alums.

We will definitely be returning to Drag Nation.