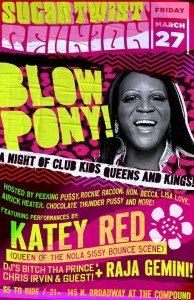 Blow Pony is a monthly party that usually takes place in Portland, Oregon, but travelled to Denver on Friday as part of it’s eighth anniversary, and the queers came out to help them celebrate. The Compound was packed from wall to wall, and even overflowing onto the patio where the air was filled with smoke and wigs, hats and headpieces that barely fit through the door. The best part? Suckers were taped to the wall, to keep guests orally fixated.

Okay, the suckers weren’t the best part, because the entire night was incredible. Seeing so many people decked out in leather, spandex, heels, mesh, and the most popular of the night fur. There was a lot of fur for the beautiful night, and exceptionally warm bar. But it’s the price to pay for beauty.

Throughout the night people took their turn on stage voguing, twerking or just dancing like no one was watching before Raja, the winner of RuPaul’s Drag Race season three, and Katey Red took the stage around 12:30 a.m., just an hour before last call. Maybe they weren’t aware that Denver drinkers had enforced early bedtimes?