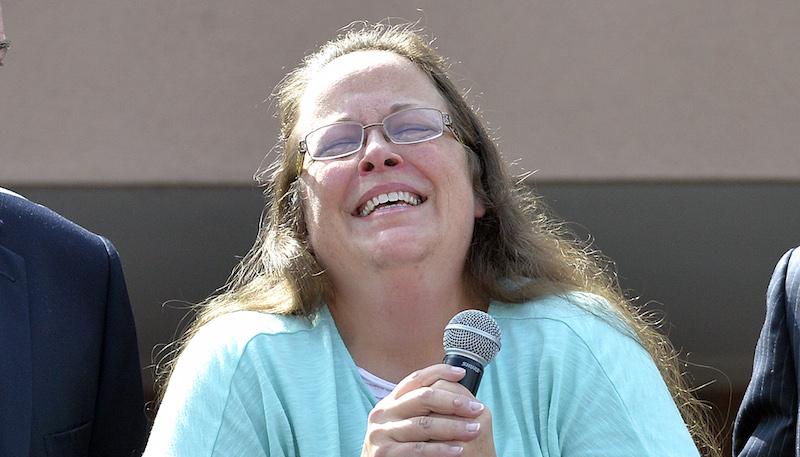 The Internet has exploded. Exploded with posts, rants, support and hatred for the Kentucky county clerk who has received her fifteen minutes of fame for denying same sex couples marriage licenses. Kim Davis has become a household name, and this is a problem. T

Let’s start with what Davis is. She is a zealot. She is unwavering in her mission to stand up for her god, and she will resort to any fanatical measure to make sure that her god sees her as an outstanding human. She is solidifying her place in heaven the only way she knows how. To her, the gay community are not worthy of marriage because the Bible tells her so. There are plenty of people like her in the world, make no mistake, but the difference between her and the man preaching from his soapbox on the corner is that she is an elected official.

As an elected official, Davis can’t be fired. Kentucky law largely shields an elected official like Davis from being forced out of her post. Until the next election, when the voters can boot her, she can be removed only through impeachment by the state legislature. That is a lengthy process that has rarely been pursued in Kentucky. The simpler solution would be for Davis to resign, or start issuing the licenses. Neither of which a zealot would even consider.

So yes, this is a problem. Yes, we should be mad about this. Yes, this deserves our attention.

However, this problem is exponentially smaller than any other problem being faced in the queer community. We are homeless. Our kids don’t feel safe. We are discriminated against. We can’t get jobs. We are still struggling to survive. We are dying.

A name that should be on everyone’s lips is Tamara Dominguez. Don’t know her? Shocking. Dominguez was the 17th transgender person reported as killed in the United States this year. On August 15th, Dominguez was ran down with an SUV in Kansas City, Missouri. What about Kandis Capri or Elisha Walker who were also murdered in August? That’s three in a span of a month. But these names were not shouted from the rooftops, or spamming every single person’s newsfeed.

This is the real problem. As the gay community gains more visibility, representation and rights, they are forgetting about their less privileged brothers and sisters who have stood beside them for equality every step of the way. Hell, they were the ones who cast the first stones at Stonewall. They threw the first punch, and it’s as if we are punishing them now.

Not everything is about heteronormative gay men gaining and keeping their rights. We boast that being queer is about acceptance and love, but is that only catered to those that can afford it? Those that can slide into the public’s eye without notice, assimilating into the world? It shouldn’t be.

Yes, what Kim Davis is doing is wrong, but is she much different from us? We have chosen to stand up for what we believe and we will fight for it no matter the cost, even if that means sweeping the more important issues under the rug.