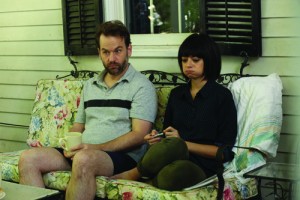 Any given Wednesday, you might find Mike Birbiglia walking down the streets of Denver … or any other comedy-loving city. But it wasn’t stand-up that brought him to Cherry Creek this time (though he did play the Paramount on his last tour) — it was his second feature film, Don’t Think Twice. Birbiglia wore all of the hats on this one: writer, director and co-star. The picture follows a close-knit improv group whose very core is shaken when the prospect of fame lands squarely at the feet of a single member. Yellow Scene contributor Brooke Wylie caught up with him to chat about the hilarious film.

YS: This cast is insane. How did you pull together all of these people?

MB: They’re something, right? Woody Allen said 90 percent of a movie is casting? I don’t think that’s wrong. Chris Gethard and Tami Sagher are people I improvise with at UCB and I’ve known for years. Keegan-Michael Key was this great coup of casting, in the sense that I was just in sort of a Key and Peele wormhole at that moment where my wife and I were just watching it ’round the clock. We thought, “Well, what if he played that part?” Kate Micucci was similar; I was obsessed with Garfunkel and Oates. With Gillian Jacobs, it was Lena Dunham’s idea. She read the script and she said, “This is what Gillian Jacobs is like. This is like a perfect role for her.” It was surprising because she’d never really played a role like that. … It ended up being the most prophetic thing in the process.

YS: This is a picture that lives and dies on chemistry; did the cast have a chance to bond before the cameras started rolling?

MB: We did all these improv workshops together with a woman named Liz Allen, who’s a brilliant improv teacher and author. She merged us as a group, really made us congeal. They came to town two or three weeks early and we became like a family. We became best friends. We still are. … Frank Oz, one of my favorite directors of all time, he goes, “the script is done, you just need to get the cast to town. You need to take them bowling.” He was like, “I always take my cast bowling.” We did, I took them bowling. It worked. His whole thing was, if they’re not believably friends, the movie doesn’t work.

YS: How much is Don’t Think Twice informed by your personal experiences?

MB: It’s not an autobiographical story. It’s a very personal story. It reflects a lot of my feelings towards show business over the years. I’m 38 and I’ve been in it, in some capacity, since I was 19… At a certain point, probably eight years ago, I had a sitcom pilot for CBS that didn’t get picked up for air. I was crushed at the time. Then, in retrospect, when I had all this time free, I was able to make my own work. … Now, I’ve made three one-person shows and directed two feature films, all with creative control and able to do it outside the system. In retrospect, I look back at the CBS thing and I go… “I’m so lucky I didn’t get that.”