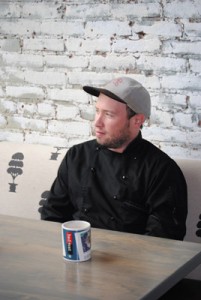 Right now it’s harvest season in Colorado and Chef Derek Baril has been waiting all summer to bring those flavors the tables of Wild Standard. “I’m getting watermelons and all this stuff that you want to feature in the summertime, but it doesn’t come until September,” Baril said. “In two months, we’re going to be working with nothing but butternut squash and root vegetables.”

With a vision is to promote wild seafood and local vegetables, Baril adapts. Available ingredients guide the creation of his menus, which are transformed roughly every three weeks.

Baril grew up on the coast of Maine and still maintains friendships with fishermen there. His lobster guy is an old friend. With no middle man, the lobsters come direct, the chef saves a little and the fisherman gets paid a bit more. His coastal upbringing shaped his love of seafood and  drive toward sustainability.

As a teenager, Baril cooked in his family’s restaurant. Then he had a ski bum phase in Colorado, where he spent his days out on slopes and his nights in kitchens. He eventually went professional, so to speak, leading him through a few restaurants before a three-year stint at Salt under Bradford Heap. There, he learned more of the business side of creating a menu, juggling food availability and costs. When Wild Standard opened in 2015, Baril was chosen as executive chef.

More than a year later — and after an abandoned dim sum service style — Baril feels the restaurant has found its identity. A short version of Wild Standard’s approach to food is extending the farm-to-table approach to wild seafood. Fish are seasonal, and while some patrons and critics have bemoaned the lack of certain popular fish on the menu, they also missed the point.

Salmon is a prime example. It’s on Baril’s mind because the season is winding down, but also because he recently returned from a trip to Alaska where we went out on the salmon fishing boats and visited a fishery — a debated concept in the farm-to-table community. Baril came away with a more open mind about the sustainability of that kind of fish farm, but still wants to follow a seasonal approach. That means offering less popular fish, “trash fish” even, which he admitted can challenge his preparation skills, “Dogfish. I’ve tried lots of different recipes, and it’s only good fried.”

The fish are the protein on the plate, but not necessarily the star. To accompany a strong-flavored fish, like cod, Baril will prepare eggplant purees or tomato comfit elevated with a few premium spices, like saffron. The vegetables are intended to pair with the protein, but can stand on their own, which is an intentional feature of his menu.

The Wild Standard menu has no call-outs for vegan or gluten-free diners, which are plentiful in Boulder, because Baril has designed his dishes to be easily customized to accommodate a plethora of dietary requests. Baril would rather a diner simply ask the wait staff, or have a chef go speak to the diner, about the available changes to a dish than to offer a vegetable-only dish. Chefs visiting Boulder, from as nearby as Denver, may scoff at these requests. Not Baril. “It’s awesome. It’s made me a better chef,” Baril said. “I’d say, right now, 95 percent of my menu is gluten-free just because it makes it easier for me. In the hospitality industry, always say yes.”