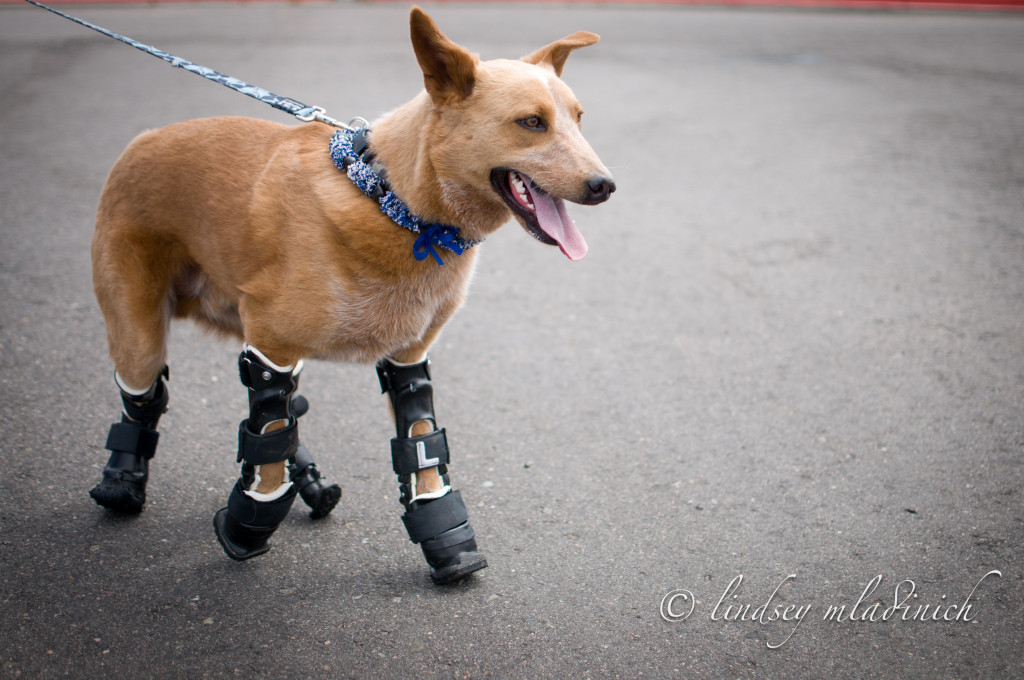 The pet industry now demands attention as a significant sector of the United States market. The American Pet Products Association predicted that Americans would spend over $70 billion on their pets, and over $16 billion on veterinary care alone, in 2017. As the industry continues to grow, veterinary medicine and technology have been able to catch up with human healthcare on many levels, especially in the care of pets with disabilities.

While euthanasia is still a common practice when it comes to pets with birth defects, traumatic injuries, amputations, or potentially terminal illnesses, advances in veterinary medicine are providing more options for these animals and their owners. Among them, prostheses, orthotics, reconstructive surgery, and rehabilitation have made it easier for disabled animals to live normal lives.

To Christie Pace of Peyton, CO, money was no object in finding the best care for her pet Naki’o, a red heeler mix now famous for being the first dog to receive four prosthetic limbs. Naki’o was found abandoned in a foreclosed home during the winter as a puppy, and lost the lower parts of all four limbs to frostbite. Even after a quadruple amputation, Naki’o was a happy and “smiley” puppy, Pace remembers. After finding a home with Pace and her husband, Naki’o got along fairly well until he grew bigger and his mobility began decreasing significantly. “He couldn’t go on hard surfaces,” Pace explained. “Oftentimes he would just stay in his dog bed.” At the time, Pace wasn’t aware that prostheses were an option for animals, but she knew Naki’o was going to need assistance. 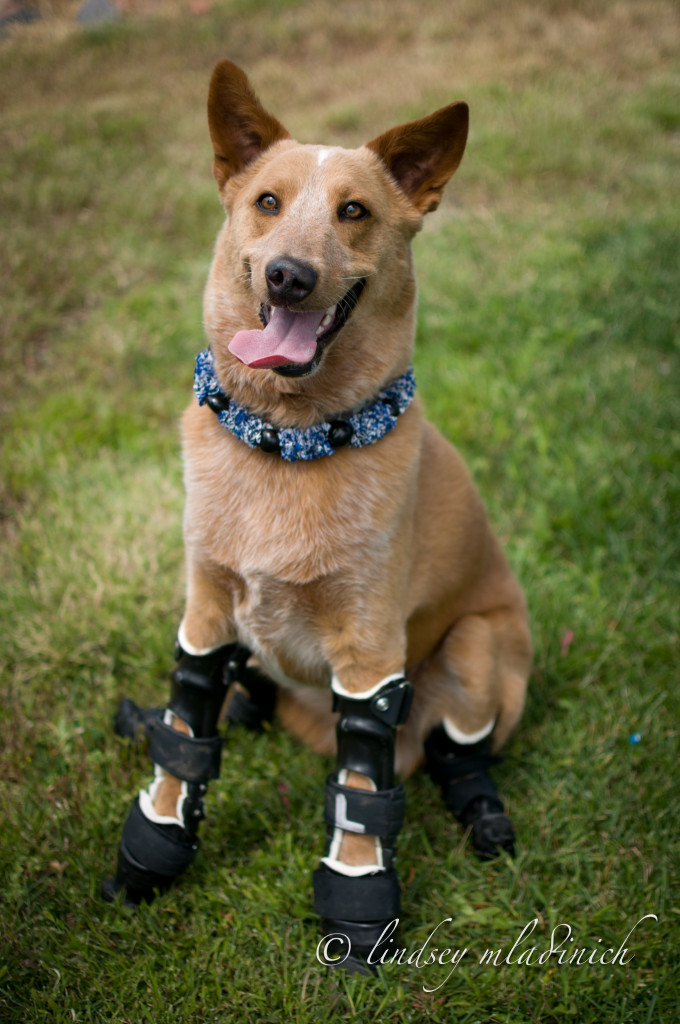 Pace eventually found out about OrthoPets, a Colorado company and one of the first in the world to specialize in animal prosthetics and orthotics. She originally held a fundraiser at the vet clinic where she worked to raise money for a single prosthesis for Naki’o’s left hind leg, which was shorter than the rest. However, after deciding he would need all four in order to live a normal life, OrthoPets donated three other devices to complete the set. “That’s how we were able to afford his prosthetic limbs,” Pace stated. “Everyone was so kind to us.” The prosthetics made a huge difference, according to Pace: “You could see a lot of improvement in the way he was moving. He was running, jumping, playing.” Due to the shape of his remaining bones after his amputations, however, Naki’o also needed two revisional surgeries since receiving his prosthetics, which also meant replacing two artificial limbs.

Pace, who has four other dogs with disabilities, laughingly said, “I think all my dogs are million dollar pets.” Still, the financial aspect of Naki’o’s medical care demands attention, with the cost from multiple surgeries and a set of prosthetics compounding into a large vet bill. Pace mentioned she used to get a lot of questions regarding the financial implications, the main one being simply: “Why would you spend so much money on a dog?” She went on to recognize that some people would not be willing to make the same sacrifices for a pet, saying, “Someone actually told me that if Naki’o was their dog, they would have shot him.” 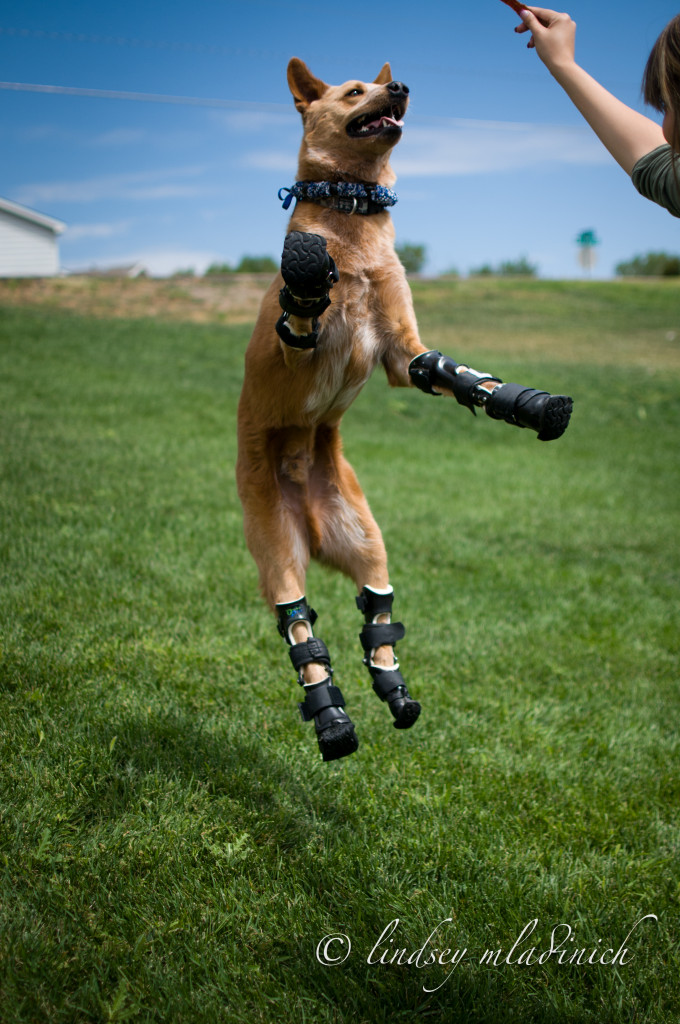 According to Pace, the belief that euthanizing pets with disabilities is normal or even expected is beginning to shift, thanks to medical advances, and increased awareness and acceptance. She believes that many people either don’t know their options as owners of special needs pets, or they don’t recognize their animal’s potential to live a high quality life beyond surgery and illness. “Animals live in the moment,” Pace said, “They don’t think, ‘I’m paralyzed so I can’t go down that staircase.’ They just do it.”

Naki’o’s story is exceptional, but it’s not alone here in Colorado, where countless owners do everything within their power to protect their pets’ wellbeing in a culture that still largely promotes euthanasia. Sarah Lukas, a resident of Boulder, CO., represents this shift in thinking and has provided a high-quality life for her bulldog, Habernasch, who has experienced partial paralysis since he was a puppy. Diagnosed at six months old with kyphosis, or spinal cord tethering, Habernasch has trouble using his hind legs and has undergone thousands of dollars worth of X-rays and MRIs, makes regular visits to an animal neurologist, has tried out a wheelchair and received acupuncture, and is on a steroid regimen to reduce inflammation. He’s also been hospitalized multiple times, which can cost anywhere from $1,000 to $3,000 each time. At one point, Lukas thought he might need a surgery that would have cost almost $20,000. 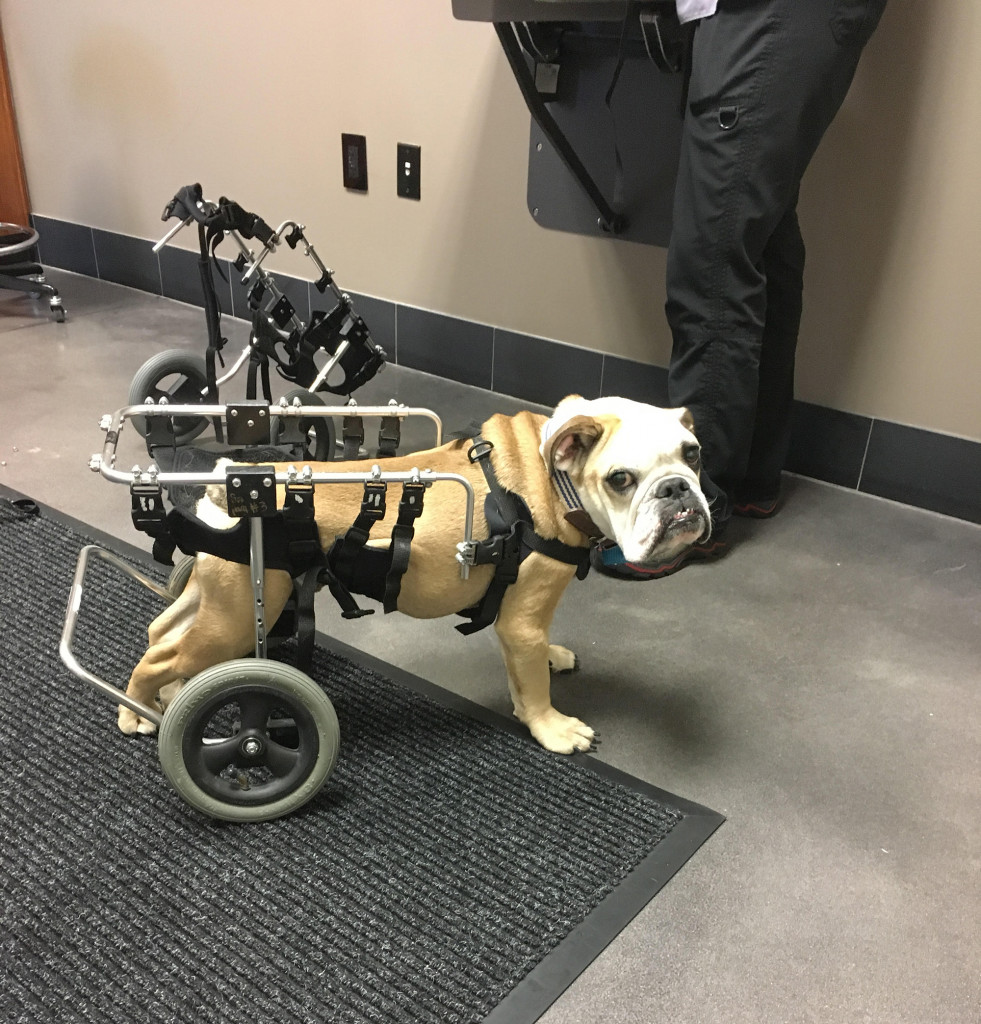 Luckily, Habernasch did not need surgery in the end and his condition has even been improving, but his medical bills still present a challenge for Lukas. She opened a credit card early on with Care Credit—a company that offers no interest for up to 24 months on medical expenses—to pay for imaging, and said she doesn’t know how she would have afforded the surgery if it became necessary. She didn’t have insurance and had no luck with non-profit foundations: “I went through a huge list of them, but for whatever reason, we didn’t qualify for it,” she said. “I looked into bulldog programs specifically, but they weren’t accepting applications or didn’t have any funding.”

While euthanasia might have been suggested to many owners in similar situations, Lukas was happy to say her vet never mentioned it. She explained that, to help pay Habernasch’s bills, a friend started a GoFundMe, and Lukas herself created calendars featuring pictures of Habernasch to sell as a fundraiser. One way or another, she was determined to get him the help he needed: “I think a lot of people would’ve put him down, but he didn’t need to be put down. He has a good quality of life and now he doesn’t even know there’s a problem.”

Fortunately, recent advances in veterinary medicine have given owners more options for their pets, including prosthetics and orthotics, such as wheelchairs and braces. Amy Kaufmann, co-founder and owner of OrthoPets, describes the Denver area as a “hotspot” for veterinary advances and cites the presence of the University of Colorado Boulder and Colorado State University as contributing factors to the progression of animal prosthetics specifically, which help so many animals achieve mobility.

Of course, prosthetics and other medical advances are not without their own complications. According to Kaufmann, in order to be eligible for a functional prosthetic device, rather than something resembling a “peg,” an animal must retain 60 percent of its limb, and prosthetics themselves, even when highly successful, present unique challenges for pets and owners. On a basic level, they can irritate the skin and even cause sores. But the biggest challenge is likely that mobility devices can also be very expensive: a wheelchair can range from $150 to $700, prosthetics from $1000 to $3500, depending on the size of the animal and remaining limb, and orthotics usually fall in the $1000 range.

Kaufmann explained that while they are expensive, the devices actually present a “fraction of the cost” that surgery would require. Whereas something like an ACL injury could put an owner out anywhere from $3,000 to $6,000, a brace would cost around $1000. Braces can even allow some dogs to avoid surgery altogether, an option that is now being seen as optimal in medicine more generally. Similarly, prosthetics can be seen as an investment in the future health of a pet, as they can prevent injuries due to overcompensation that often affect animals with amputated limbs or congenital deformities. 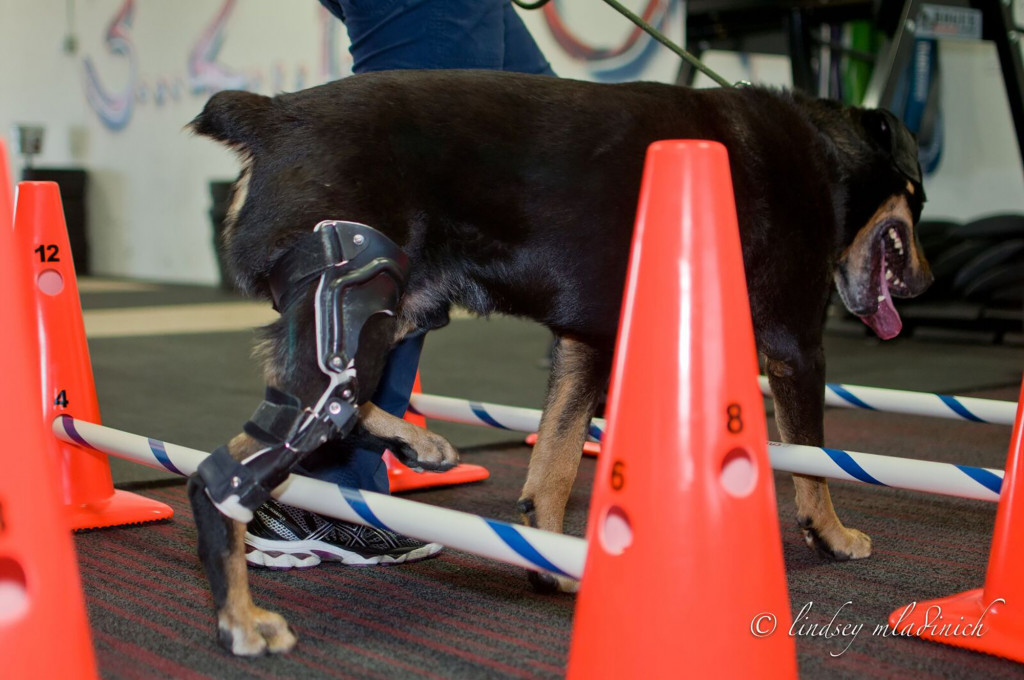 On the other hand, Francie Rakiec of Lakewood, whose golden retriever, Casey, has a prosthetic forelimb, identifies costs beyond the devices themselves: “It’s not like you just have to pay for the prosthesis,” she explained. And indeed, the associated procedures include a lengthy list of necessary appointments for consultations, fittings, follow-ups, and x-rays. There is also the cost of replacement socks and treads, both parts of the device that can wear down over time.

Another, often unexpected, cost involved in prosthetics is rehabilitation. Responding to what Kaufmann describes as a “we want it now” mentality in the U.S., OrthoPets communicates to all of its pet owners that prosthetics and orthotics “are mystical, but not magical,” and that rehabilitation is often, if not always, a necessity following a fitting. “People often think that a device will be the end,” Kaufmann went on. “They have to be convinced that rehab is absolutely necessary.” 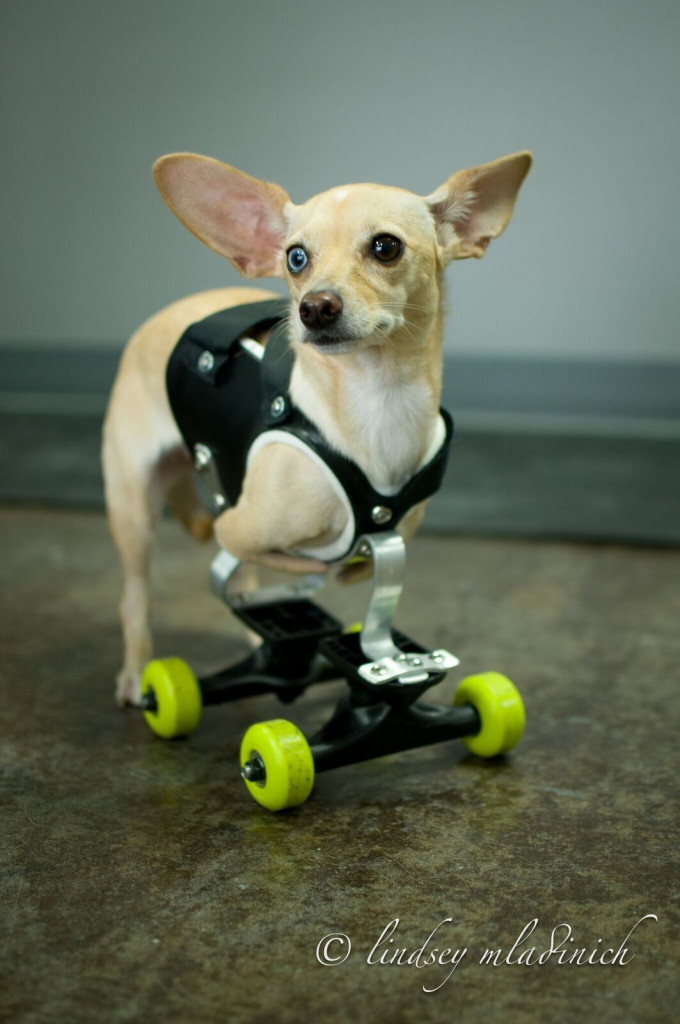 This culture of the “quick-fix” perhaps partly feeds into the normalcy of euthanasia, but the financial reality of specialized treatment is significant. Rehabilitation can become a necessity for many pets with injuries or conditions, and can include a range of services such as laser therapy, hydrotherapy, acupuncture, and electrotherapy. Dr. Danyel Wynn of Walking Paws Rehab, a clinic in Arvada that offers a range of cutting edge rehabilitative services, remembers a patient from a former clinic that had physical therapy appointments three times a week for six months. Although this is not necessarily a typical case, the cost for these visits can reach up to $120, depending on the situation, which could prevent owners from bringing their pets in as often as might be ideal, or at all. If a client cannot afford regular sessions, the tradeoff is time dedication at home, Dr. Wynn explained: “They have to do exercises, or massages, or range of motion, and other things.” For this reason, her sessions focus partly on training the owners in the exercises they will need to perform at home.

While a few clinics in Colorado offer assistance or long-term financing to those in need, many clinics and providers require payment up front, which can present serious challenges for owners. Some look to fundraising or seek aid from non-profit organizations like Best Friends, Harley’s Hope Foundation, or the Pet Fund. There are also breed- and condition-specific foundations that can offer help, such as Gunnar’s Wheels, which loans wheelchairs to pet owners. While, as Lukas’s experience suggests, the foundations are usually underfunded, it is still worth researching for pet owners with significant vet bills.

Many owners fill the financial gap with credit from lenders like Care Credit and pet insurance—luckily, a growing industry where more providers are cropping up and beginning to cover prosthetics, orthotics, rehab, and other related costs, as Petplan and TruPanion do. However, as Dr. Wynn states, “insurance is tricky.” It’s always important to shop just as you would for human health insurance to assess benefits and limitations, and to speak with your provider to ensure that certain services are covered. 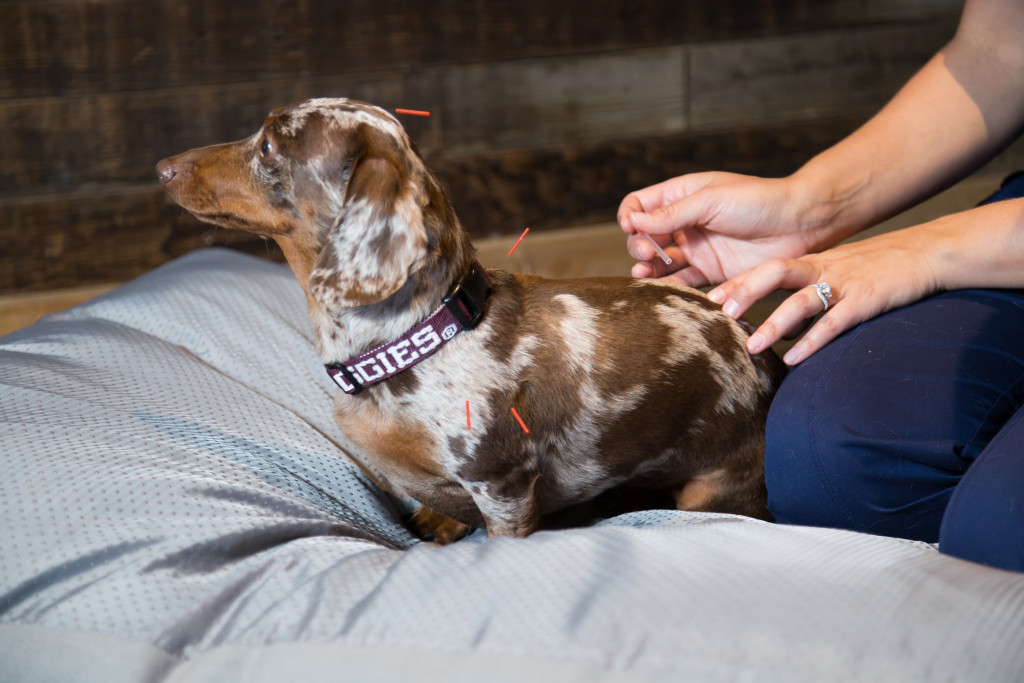 As Pace stated, knowing the options can help owners make informed choices concerning their animals’ medical needs that work for both their pets and their families. To help encourage people to turn away from euthanasia and spread awareness about pet prosthetics, Pace has written a children’s book called Stubby and His Magic Boots that she hopes will educate people about disability and help them view pets with medical issues as animals that deserve to live.

Awareness certainly does have the power to effect change. Lukas claims that her experience with Habernasch gave her a new attitude toward pets with special needs. “It’s funny how your perspective changes,” reflects Lukas, who is now considering adopting another dog, and looking specifically into bulldog rescues that have spina bifida: “They need a family, too.”

Owning any pet can be time consuming, emotionally draining, and financially challenging, but these commitments can escalate to enormous heights when caring for animals with special needs. Thankfully, advances in science have given these pets the chance to live the full lives they deserve. For owners, the high price tag is more than worth it, because they believe every animal is capable live an amazing life, and that’s worth investing in. 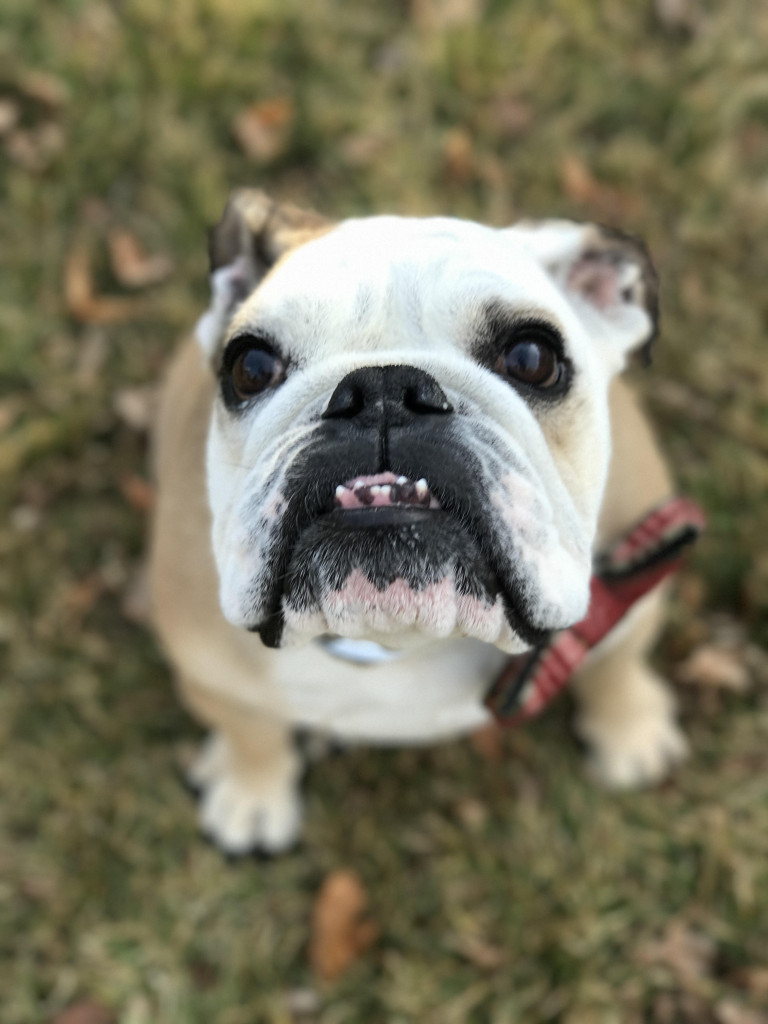