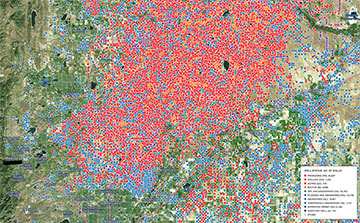 A woman was run over by a tractor in South Boulder County on August 4, and this on the heels of Denver’s recent July tractor chase across town. We’re waiting on the calls for tractor regulation. Seriously, though, let’s be safe out there.

A mountain lion got trapped inside a Boulder home, reminding us that just because we live in an aerospace hub and drive Teslas, nature still exists. A house cat was killed. Reminder to keep ground level windows and doors, pet accessways, secured.

A sexually violent predator was released from jail in July. Michael Smith, 49, notified Boulder police that he will be homeless and stay along the creek east of Broadway and Rosewood Avenue. Smith has a conviction in Rhode Island for second-degree child molestation and a 2015 conviction for sexual contact without consent.

Be aware, locals. There was a death during the Boulder Ironman Triathlon on August 7. Scott Michaelis, 50, of Wichita, Kansas, suffered a medical event during the swim portion of the Ironman 70.3 at Boulder Reservoir on Saturday and passed away after life saving efforts were unsuccessful.

A recent survey from cheaphotels.com found that Boulder is the most expensive summer destination in Colorado based on the cost of its lodging. The survey compared the hotel rates of 20 popular destinations in the Centennial State. Only centrally located hotels and inns rated at least 3 stars were considered by the survey. Be glad you live here and don’t have to hotel it.

Kirsten Lippold, a 48-year-old Boulder woman, was sentenced to 10 years in federal prison for selling heroin, which a user fatally overdosed on. Please stop selling heroin and opioids.

Initiative 97 – the fracking/drilling setback increase – got a huge boost as activists and supporters turned in 171,000 signatures, in spite of oil & gas interests hiring people to harass signature gatherers. I-97 will be voted on in November, and would require a minimum distance of at least 2,500 feet between polluting oil and gas operations and homes, schools, hospitals,and water supplies.