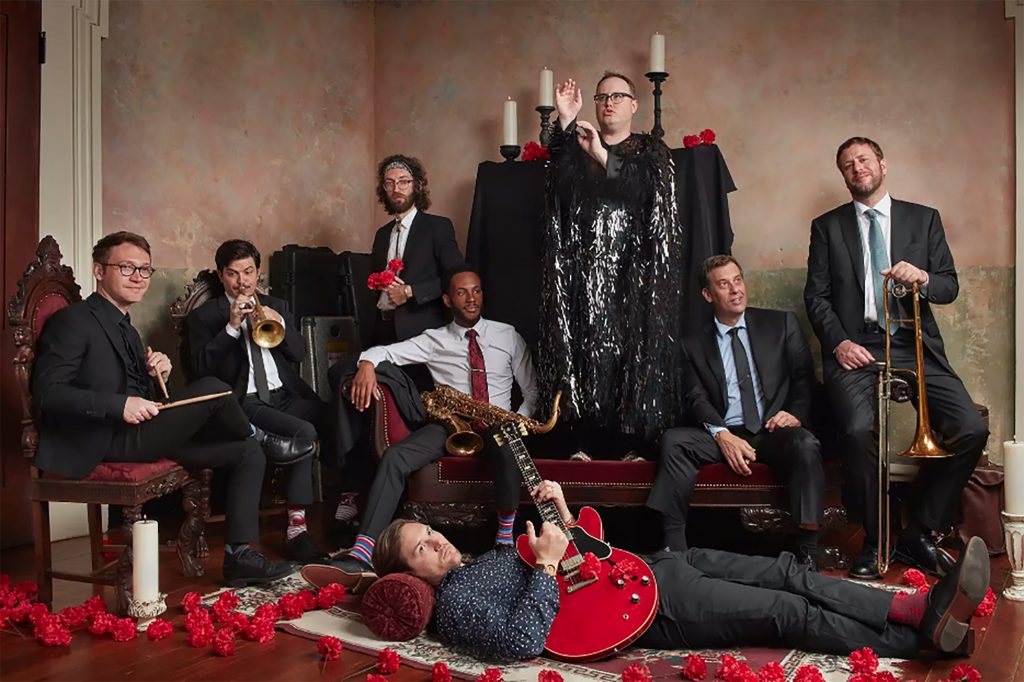 Paul Janeway’s soft-spoken Alabama drawl belies a lot about what you might have come to expect from white guy who grew up in a conservative Christian community in the Deep South. And when you get him on stage, the part of him that almost found its way into the cloth grabs hold, but it’s the Marvin Gaye-influenced vocals that blow you away. St. Paul and the Broken Bones dropped their third album on Sept. 12, and with it, notice to the world that they’re not just another soul revival band. This time, Jack Splash — writer and producer for hits by artists like Alicia Keys, CeeLo Green and Kendrick Lamar — is on the payroll, and his mark on the new LP is indelible, moving St. Paul forward in time without shedding its swampy roots cred. Here, Janeway talks about working with the popular producer, getting love from the Rolling Stones and being a blue dot in a very red sea…

French Davis: Can you talk about this album; why you made the choice to record in L.A. and work with Jack Splash, and how this outing really differed from your earlier releases?

Paul Janeway: I mean, we recorded part of it in L.A. and part of it in Nashville, so we did a little bit of everything on this record. I think it was just, basically for us, do something different; do something out of our comfort zone. With Jack, we had looked at his previous work and wanted to go in a different direction… When I met him, I thought, “Well, maybe, this guy is the guy to take us there,” and we just hit it off. We had a really good relationship, a good rapport, and he was charming and excellent at what he did, and the band really liked him, which you know, is tough, when you’ve got eight guys in a band and they all like the guy, that’s a win. But for us, it was really just going in a different direction and trying to…be a little more modern obviously.

FD: Describe the songwriting process to me. Does it start with lyrics? Do y’all just jam till you come up with a hook? How does it all go down?

PJ: I think we found a good space, because this is our third record. So as a band, you still kind of have to learn how to write with each other. For some (bands), it’s just the lead singer and maybe one other person and that’s who writes all the songs. For me, for it to be a truly kind of band experience, you have to include everybody, you know? That can be difficult, and we found that out on the second record; it was a lot more difficult. But this record, what we did, and I thought it was a great idea, is we had a dropbox. Basically, anybody who had an idea, I didn’t care who it was, put it in there. If I was feeling it, like, “Okay, there’s something here”, then we would hash it out and work it out. Also, me and Jesse (Phillips), who is the bass player, went out to L.A. and hung out with Jack and we would work on demos and stuff and then one time we had the whole band in the studio with Jack and that’s how, “Apollo” was written. We figured out there’s many ways up the mountain but I think as far as we did it this time this was by far the best experience.

FD: You got to play with the Rolling Stones and Keith Richards said you’re a “cat that can do an Otis Redding,” and that you were “interesting to watch on stage.” How did you internalize that?

PJ: I don’t think you do. I think internalizing it would be a bad idea. I think it can make you think things that maybe you’re not. For me, it was obviously flattering. I don’t know… To me Otis Redding is somebody who is… that’s sacrilege in my book. I was obviously flattered and you take it for sure. That kind of information I don’t know really what I do with it. I kind of go, “Wow, that was really awesome, I don’t what he sees, but that’s great that he said that”. Now PR people can put that in their clip pressings and stuff. It’s flattering, but I don’t take it to heart. I think he was just being nice.

FD: Well, I don’t know. Keith Richards, I never got the perspective that he’s the kind of guy to blow smoke.

FD: I can feel that your humility is genuine and it’s interesting, given the choice to adopt St. Paul as a moniker. Apostle to the gentiles as he was.

PJ: Well, that wasn’t my choice. I actually didn’t want my name at all in the band. Jesse the bass player, me and him been have been best friends and formed the band. He put it out there, and it stuck.

FD: You know, that’s interesting talking about that. You came from the deep south, and you said that you’re a pretty liberal guy, politically speaking, and obviously, it’s a weird time out there now.

FD: How does that dichotomy play to you? You’re clearly Alabama-bred and you’ve talked a lot about, in previous interviews, and music a little bit, about how deeply entrenched you are from that world. But then again, you obviously have a different outlook than a lot of people in the area. What is that like, having to resolve those two sides of who you?
PJ: It was difficult. It’s not as difficult now; I have family that wants to crank up on politics and stuff. I have to say, you know, “I’m a registered Democrat, I’m very liberal. We’ve had this discussion. You know how this is going to go. You know we’re going to disagree.” The one thing that I do discuss; there’s to me things that have been politicized that shouldn’t be political. Like mass incarceration of men of color, people of color. To me, that is just as much an anti-Christian idea as anything. You want to talk about the economy or less government, that kind of stuff, that’s fine. You know what I mean? There are legitimate arguments in that realm, but you start getting into human rights and things like that, that’s when you start going, “hmm.” That’s when I will say something. I don’t care about tax cuts. I mean I do, but that’s a policy thing.

FD: And depending on where you come from religiously, if you follow the teachings of Christ, it seems like pretty much everything he said is going to align with things like what you’re gravitating towards around. Helping people.

PJ: Well, that’s always been the frustration I’ve had. Those are still a moral compass in my life. Though I’m not super religious, I still believe that those teachings that I learned… What I could never balance was the idea that we have all of these… Why is social justice and human rights such a terrifying thing (to Conservatives)? I don’t know where that narrative came from. It’s like, for example, people against the death penalty. I get that, or even, it’s a very controversial thing, but abortion. I get how people go, ” It’s all about your line and what you think where life begins”. But that’s fair, you know what I mean? But we get social justice, I don’t understand how people can just turn their moral compass off on that stuff… There’s things you’ve got to learn and understand, but the basis of it is being a loving person. I can now because I’m comfortable with it, but when I was younger I couldn’t equate the two. It was so hard for me, because you’re trying to figure out yourself. I love Alabama football and there’s things about the south that I love, but I couldn’t understand… If we’re so religious, why was the south one of the worst about race relations? It was hard and it still is kind of bizarre. To me, what got me there was church. That’s still kind of how my moral compass works.

FD: Alright, standard, desert island question. What three, four albums that you have with you on a desert island that’s all you’re going to listen to the rest of your life.

FD: That’s a good, wide cross section of music right there. I like it.

PJ: It was funny, I just got done with an interview we were talking about, generationally, for me, there’s really no such thing as genres. I’m not so adherent to those things. I feel like a lot of people aren’t anymore. Music can go all sorts of ways, which is kind of what we do. I am trying to think… I don’t know, “Rain Dogs”, and maybe “XO”. I mean, yeah.

FD: I could go a lot longer on this if we had more time. I’d love to. There’s stuff I wanted to cover a little bit about the analog nature of how things were changing in this environment. I feel like there’s something connected to the way music is evolving right now and the socio-political environment and I wanted to –

PJ: I think you’re right. I think honestly, man, for me, it’s a situation… We’re just facing that right now, so for us, our audience has gotten younger. The problem with that is there’s the old tried-and-true with an older audience that you can do, and right now it’s hard to figure out… Because streaming is so popular… We’ve had two songs on the viral charts on Spotify for the U.S. Bands would kill for that. The problem is we don’t really know what that means. What’s hard right now is how do you capitalize on that?

PJ: Exactly. Well, that’s the thing. But the problem is that I’d be a hypocrite because if I’m not listening to my vinyl, I’m listening to some streaming service. I’m listening to Spotify. If someone would have told me years ago that I didn’t have to bring a giant booklet of CDs, that I could just have it on a little phone… So I get from a consumer’s perspective. As an artist, all it’s turning in is to advertisement to our live show.

FD: As long as you’re touring.

Paul: And that’s the problem, like, do you want to tour forever? Am I going to be rolling myself in carpets until I’m 65? Or 70? I don’t know. Part of that is fun, though. It’s fun trying to figure out how to activate the fan base you have.

St. Paul and the Broken Bones play the Boulder Theater on Oct. 12 at 7:30 p.m. Tickets are $35+, www.bouldertheater.com for more information.