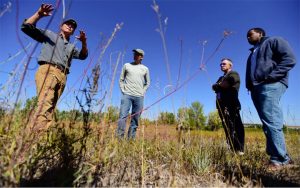 Kelly Armstrong and U.S. Rep. Joe Neguse in a wetland area next to The Golden Hoof in Boulder. Photo by Matthew Jonas/ dailycamera.com 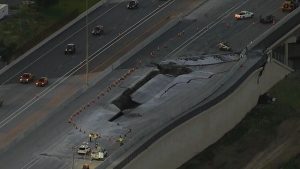 There was a body in a Boulder County Ditch. City of Boulder staff found the body of a man who was likely in his 50s or 60s in Farmers Ditch. It seemed to have been there for a long time. • Boulder County Judge finds probable cause to continue case against Fourmile murder suspect. Stephen Wolf had been charged with the murder of Boulder County resident Jeffery Lynch as well as other additional charges. • White woman yelled racial slurs at a black student on the CU campus. Other former students also accuse the woman, Rebekah Krajacic of harassing them in the past. • Representatives Joe Neguse and Kelly Armstrong tour Boulder County farms in search of bipartisan climate solutions. They learned about the potential regenerative agriculture has to help with climate change. • U.S. 36 Eastbound reopens after collapse in July. All lanes in both directions are open in their normal configurations. Some repair work will still continue. •  High-speed chase on I-70 ends in suspect’s death. After an armed carjacking in Strasburg, Andy Escobar led police on a 35-mile chase, then shot himself. • Late-Summer high temperatures cause algae growth in Lafayette water. The death of the algae causes an odd smell and taste to the water, but is not harmful. • Erie trustees approve oil and gas policy statement. The statement is about a paragraph long and says that the town of Erie is committed to protecting the health, safety, and welfare of residents, visitors and government. • Boulder County elections are underway. Make sure to vote for your local leaders on November 5th.

“The cornerstone of my service has been fighting climate change as the existential threat that it is.”

“We’re grateful to have received support from across Colorado for our campaign to bring change to Washington… Each and every person who chipped in recognizes that Colorado needs a new independent voice, a Senator who reflects our values and will work to bring people together and get things done on issues that matter to Coloradans — like expanding access and controlling costs for health care, and tackling climate change head on.”

“This racist incident reminds us of who we are as a campus community. Incidents like Sunday’s only reinforce the difficult work that we have yet to do.”

“I am deeply concerned that this decision fails to protect allies who gave their lives alongside our troops to accomplish U.S. objectives and fails to facilitate our continued efforts against ISIS.”

“As anyone who has ever seen a comic book movie can tell you: with great power comes great responsibility. That’s why we’re calling on you to use your massive platform and influence to join us in our fight to build safer communities with fewer guns.”