Sympathy for the villain (read: victim): The Joker and Mental Health | Guest Commentary

[Author’s Note: This article is a guest commentary from Chance Johnson, host of Punk Journalism. This podcast/blog explores a variety of social issues, questioning the status quo in typical punk fashion. My goal is to get people thinking about these important, controversial topics by really triggering critical thought. Recently, I wrote the attached blog about the film “Joker,” and how I think it’s such an excellent commentary on mental health and the way people who suffer from mental illness can fall through the cracks. For more from Chance, check out punk-journalism.com.] 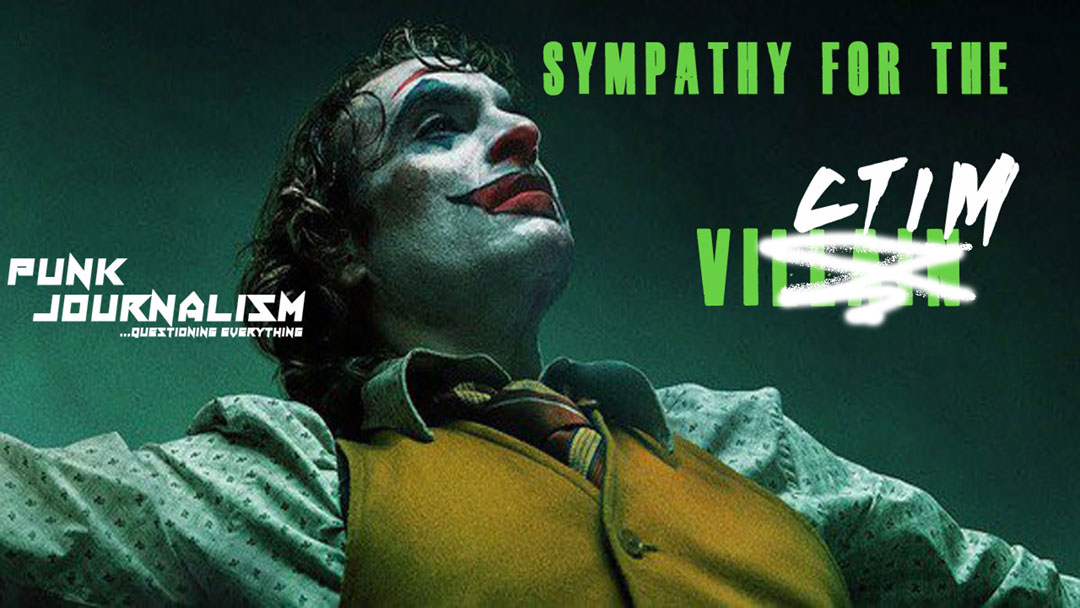 I’m having second thoughts about Batman, my favorite superhero since I can remember. I’m starting to steer my sympathy towards his arch-nemesis – the Joker – in a way I never considered.

In 2016, I attended Wizard World Las Vegas, a comic book convention. While browsing the various authors in attendance, one book caught my attention: Batman and Psychology: A Dark and Stormy Knight. I’d read it four years prior and loved it. I was excited that the book’s author, Dr. Travis Langley, was sitting right behind his display of books, ready to converse. Langley is a psychologist and distinguished professor at Henderson State University.

I interviewed Langley for a podcast I used to produce. I asked a burning question and was surprised it didn’t elicit more of a response. The exchange is as follows:

Me: “You look at (Batman’s) rogues gallery, and they’re largely people who are very mentally distrubed, that have been placed in very bad care. Do you think it creates a negative stereotype when you see characters like this portrayed as villians?”

Langley: “You can be mentally ill and still be a very evil person. The average person doesn’t connect the Joker with psychosis…I don’t think, for the most part, that those Batman villains ought to be shaping our views of the mentally ill. I think that [the] media in general does a lot of things that will affect these views. Batman’s enemies are so far out there, and so unlike anybody else.”

I reached out to Langley recently to see if he’d follow up with me on his position in light of the new film. He emailed me back, expressing that because he’s just released a new book, he’s swamped with interviews for the rest of the year.

Now here we are, three years later, with a portrayal of the Joker that contradicts the idea that Batman’s enemies are “so far out there.” Joker attempts, and succeeds, at humanizing Arthur Fleck’s plight by making him a sympathetic character. It does a public service of painting a picture of what it must be like to be a person who suffers, very desperately, with mental illness. He’s someone who tries in vain to better themselves despite their psychosis, lack of resources, proper treatment and lack of medication, a person who ultimately falls so deeply through the cracks of a broken system that they slip off the sliver of sanity they were standing upon. Then, after a lifetime of being beaten down and ignored, he’s finally noticed. But, only as the villian. Then a dashing, rich, handsome hero comes along and beats them to a bloody pulp to protect those who have benefitted from the system that created him. Law and order for the sake of law and order. 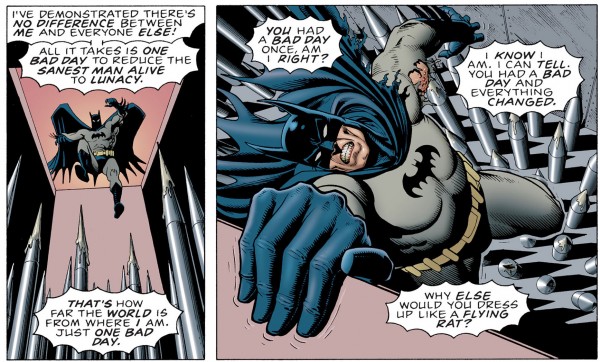 Of course, I agree with Langley. You can be mentally ill and very evil. Anyone can be evil. How much is society to blame for this evil being unleashed? Could it have been prevented if someone like Arthur Fleck had been given the help he needed and actively sought before spiraling into madness and transforming into the Joker?

“As you know, madness is like gravity…all it takes is a little push.” – Heath Ledger’s Joker, “The Dark Knight”

To be fair, multiple incarnations of the Joker exist: A crime boss who took a dip in toxic waste, a giggling trickster, a sociopath who tortured and killed small animals as a child, an anarchist, and a loner rejected by society. We’re focused on the latter two, who are likely one and the same.

The problem is that – in each incarnation – Batman goes around beating the hell out of the dregs of society and the mentally ill. This callous reaction through brute force reinforces the popular, and narrow-minded, notion that people choose whatever life they’re living, that they could pull themselves up by their bootstraps if they wanted to. It disregards the circumstances that so many people are born into. Batman’s main mission is to feed you your fu*king kneecaps if you snatch a purse, making you too fearful to do it again. It’s like a Scared Straight preventive program, in spite of evidence that Scared Straight programs don’t work.

To give credit where credit is due, Bruce Wayne works as a philanthropist and is charitable, but that’s not the side we see. Vigilante Batman is the main draw. Batman is selling tickets and comics. His villains and thugs are largely nameless and faceless. Or, at most, one-dimensional pre Nolan-verse. It’s a problem of simplistic duality. Good versus evil. Black versus white. Nothing in the middle.

In Tim Burton’s “Batman,” the opening scene is of a white, well-dressed family of tourists who get lost in the alleys of Gotham. They’re mugged by two guys who look like junkies, strung-out with pale skin and blood-shot eyes. Batman hangs the men off of a building, and they’re hauled off to jail. In 1989, this set the tone for Batman in cinema until today’s “Joker.” The latter film does a great job of examining the way in which we turn a blind eye to poverty, again assuming that people’s situations are purely a result of their life choices, rather than circumstance.

A controversy surrounding “Joker” leading up to its release was that it would inspire copycats, like the Aurora Theatre shooter during 2012’s “Dark Knight Rises”. A group of incels (involuntary celibates-cum-misogynists) hinted at the possibility of movie theatre shootings, suggesting Joaquin Phoenix’s portrayal of the Joker relates to their struggle. Those outside of the movement expressed concern at the possibility of a shooting.Thankfully, none of this has come to fruition.

It does, however, beg the question, posed by the hosts of the Deep Fat Fried podcast: are people really frightened that the violence of the film will insight real-life violence, or is the character study of why a person snaps what’s making people uneasy? As TJ Kirk and Paul Parkey Jr. mentioned, people watch John Wick blow away people for three films and aren’t concerned about repercussions. To watch the birth of a “villain”, though… now that makes people squirm, especially when we, as participants in the society that created him, have to assume a bit of collective guilt.

Real art is up for interpretation, and is subjective. Awash in a sea of glitzy, overly CGI’d, family friendly superhero flicks, this film is punk. See it, and keep an open mind. If it makes you uncomfortable, embrace that. Don’t be so quick to write it off, but instead try to understand why it makes you uncomfortable. Did it force you to face reality, while you were anticipating escapism? We never learn or grow by staying in our comfort zones. Consider that your family, friends and co-workers may be suffering like Arthur is, before it’s too late. Before they end up hurting themselves or others.

The real villain is us, mainstream society that turns a blind eye to suffering. A society that props up the likes of Ronald Reagan as an idol, while not acknowledging that he was responsible for repealing the Mental Health Systems Act, deinstitutionalizing mentally ill patients at the federal level. This left them hopeless and helpless and – most importantly – easily vilified. There is no link between mental health and violence. In fact, the National Alliance on Mental Illness points out that, “most people with mental illness are not violent. In fact, people with mental illness are more likely to be the victims of violence”. This isn’t about the majority of those suffering with mental health issues. This is about a very specific cross section.

In the case of Batman and Joker – Bruce and Arthur – we have to think deeper about the link between mental health and violence. NAMI is clear that, “there are certain factors that may increase risks of violence among a small number of individuals with mental illness. These factors include: Co-occurring abuse of alcohol or illegal drugs (Bruce), past history of violence (Both), being young and male (both), and untreated psychosis (both)”, making both Bruce and Arthur dangers to society. We are shown a Batman taking out the trash, cleaning up the streets, and being a rich, white man helps in maintaining the image. When the Arthurs lash out they are portrayed in the mainstream media as villains, seared into the public imagination as the problem, tricking us into believing that the untreated mentally ill are simply that.

Until we have an honest conversation about mental health, male violence, and the failures of society to address the intersection of these issues, no one will remember Arthur. Only Joker.