Off Menu with Manal Jarrar, Arabesque in Boulder 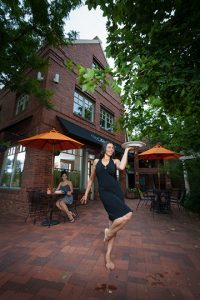 Arabesque celebrates its’ 10th anniversary serving Middle Eastern inspired breakfast and lunch in their modest digs on Walnut Street. At the helm and in the kitchen you will findfemale powerhouse and arts aficionado Manal Jarrar, whose personality can only be described as the inspiration for the word vivacious. She’s the kind of human being who exudes warmth and hugs you quickly without even saying “I’m a hugger.” We spoke with Manal about her dream of her own TV cooking show, the meaning of her name (it’s achievement) and where she gains inspiration inside and outside Arabesque.

How would you describe Middle Eastern cuisine to someone who is unfamiliar?

Middle Eastern recipes are full of cumin, cardamom and turmeric. We all have the same canvas and the same colors to create delicious food no matter the country we’re in, but it is up to you to make it unique. Sometimes I don’t want it to be like these defined cultures are pulling us apart. You have to be confident to try something new. I don’t understand. Are there not enough Middle Eastern cooks in certain areas of the United States? My food has that sliver of Middle Eastern influence in it but it can be done here in the States. It’s the way you put the colors together that makes your painting unique.

What is your favorite ingredient?

Every ingredient has its job, large or small. It’s hard to tell you a favorite unless its olive oil. My grandfather on my father’s side always had olive and orange trees. It’s important to use the best you can find otherwise you spoil the dish.

What’s your biggest failure in the kitchen?

My family would test me. They would give me $10 and tell me to go to the market. I put apples in dishes and my family complained, “What an awful cook you are!” But somehow all those memories of relatives cooking penetrated my mind and it was like a movie I couldn’t pause. My husband encouraged me throughout my mistakes and it helped me to continue. I’ve never taken a cooking class. Every single morning I wake up with the same passion as I head into Arabesque.

I learn one or two things from cookbooks but there’s continually a need to improve. Sometimes you make a happy mistake, a delicious mistake, so don’t feel like you have to be married to a recipe.

What is one thing that you wish you knew how to do?

Sing! I am not a very good singer but it’s ok. I sing for myself and that’s good enough for me. Also, I dream about a larger restaurant with chefs working under me. Right now, I am the only chef to touch the food for the last 10 years. But you know, I live in Boulder and that’s enough for me.

What is something you can’t go a day without doing?

I love to look at interior design blogs and books. It could even be my first passion and cooking is my second. If cooking was my first passion, it might burn me out. My favorite style would be cozy and modern but sometimes the house has other ideas. For example, the house I grew up in was 250 years old. We worked for nine years to preserve it. It was so ugly and badly treated but we wanted to keep its’ integrity. I don’t think there are set rules to design. You can make it charming. You can pair something ugly and beautiful together.

Where do you feel at home?

In my hometown of Acre in northwest Israel on the Mediterranean coast. The sunsets are amazing. It’s 2,500 years old.