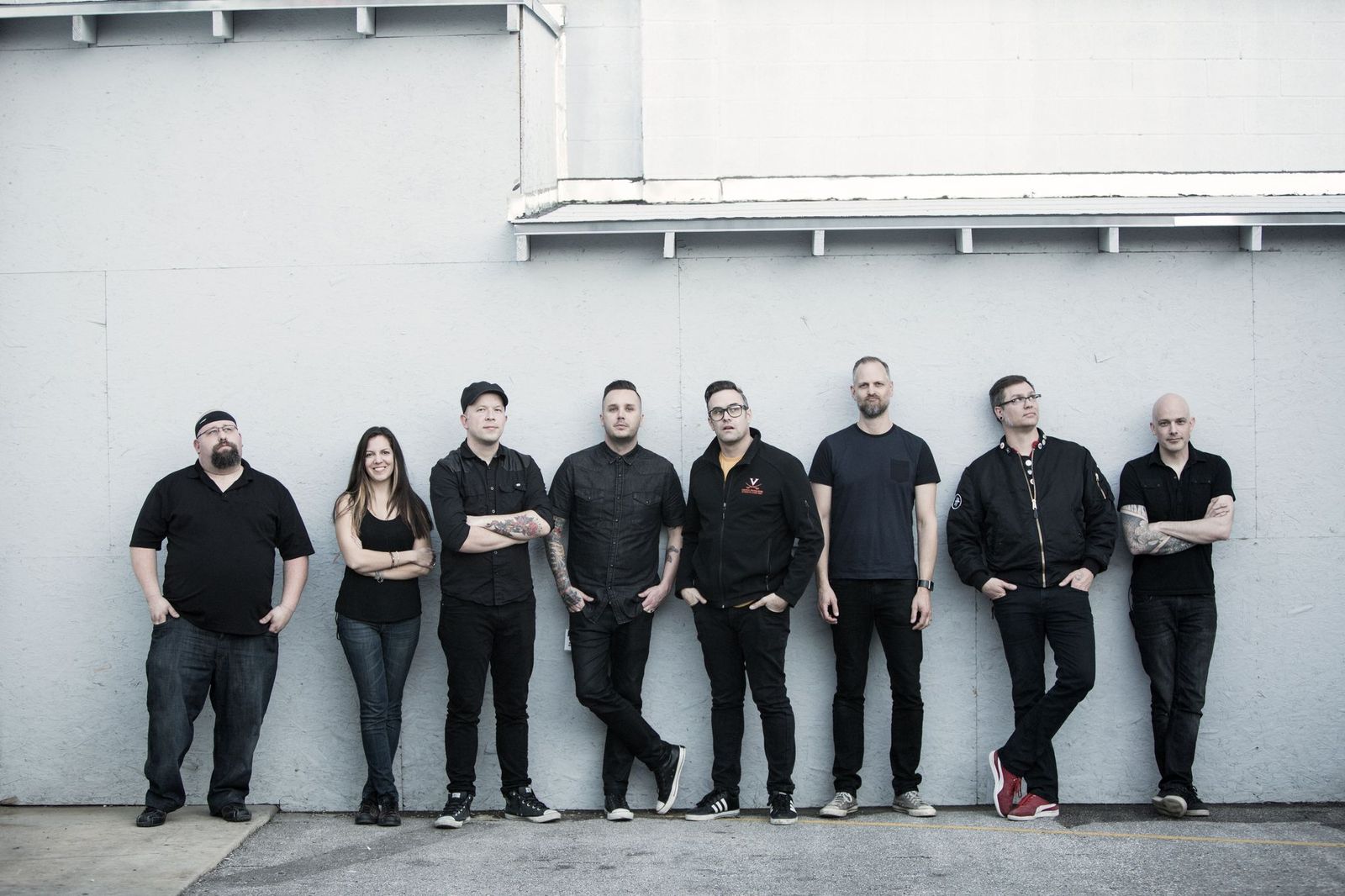 It was 1996 when Five Iron Frenzy first unveiled their somewhat non-secular take on Third Wave ska with their debut outing, Upbeats and Beatdowns, which was re-released a year later after they signed to SaraBellum Records, a sub-label of 5 Minute Walk Recordings. Twenty-six years later, lead singer and lyricist Reese Roper has relocated to Virginia where he’s a Registered Nurse, but most of the band still lives in Colorado. After a break-up in 2003, a reunion in 2011, and six studio albums in between, FIF continues to straddle the line between secular and non-secular ska, which, to be honest, might be an unfair description. Fact is, FIF may lean Christian, but their message is progressive, positive, and definitely nothing like what we’ve come to expect after the last 2,000 years of evangelism. We caught up with Reese to talk about the new album, which dropped a few weeks ago.

French Davis: First off, it’s been 7 years since Engine of a Million Plots. So why now?
Reese Roper: The truth is that Engine was so hard to make, to get all of the cylinders firing again for our band, we spent the first two or three years afterwards just recuperating and finally fulfilling all of the Kickstarter things. Scott and I attempted to start a New Wave project called Pool Party Death Machine, which caused us to have a subsequent minor falling out — and split that project into The Fast Feeling and the thing I am still working on — Heartwrench. Around 2017, we started working more on what became Until This Shakes Apart. Again, it was like we had to reinvent how we wrote together. It turned into Dennis, Scott, and me working as a committee, and then sending fleshed-out demos to the rest of the band. Probably about a year ago, we had 19 songs demoed, and then whittled it down to the 15 to record, and then 13 to go on the album. Also, COVID gummed up the recording quite a bit.

FD: Talk about the recording process for us — what led to these songs making the final cut, how you managed the process (assume some if not all of it happened during this pandemic?)
RR: Recording was a bit difficult logistically. Scott has a really nice studio in his basement, so the five of us who still live in Denver were able to record there as time would allow. Both Dennis and I each have decent home studios, so between the three of us, the demos we made were almost completely fleshed-out with all of the parts. Which means that when people showed up at Scott’s, they already knew what they had to play. Sonnie and Dennis flew in from L.A. and New Jersey to record, and then I think Dennis did some extra background vocals and horn parts from his studio when he got back home. Scott has grown tremendously as a producer over the years, so he just slid into that role, and made everything sound incredible. He really knocked it out of the park.

My part was not quite as easy. I had to rent a car and drive from where I live in Virginia to Florida the last week in June. Jeremy HS Griffith, who produced our last album, agreed to mix this one and to track my vocals. For some reason, I have a terrible time tracking my own vocals, where I end up throwing out most of what I do, and never finishing. Somehow, I ended up getting a COVID test for a job I was starting, right before I left. Jeremy was SUPER paranoid about getting COVID (as he should have been), so he actually made me wear a mask for the first 4 days. You can hear it on some songs, which is fine because it sounds like distortion, but it was unavoidable. I flew back again in October to do the final four songs and clean up some other takes, and yes, I had to wear a mask the whole time again. You can definitely hear it on “Huerfano.”

FD: I heard a bit of an Elephant 6 collective influence on “So We Sing” … intended? What other influences do you find seeping into your sound these days, 25 years into your career?
RR: This is a good question. What is funny about “So We Sing,” is that it started as Scott writing the music for a Head and Shoulders commercial for Dennis, who runs the New York office of a company that creates music for commercials. It was rejected by the ad agency and then repurposed for Five Iron. Thank God for that. As far as influences, a lot of us have been listening to newer Two-Tone bands like The Skints and Santigold. Lots of me listening to Rancid and the Clash, and poppier stuff like The Wombats and The Sounds. There’s always The Police in there, Madness, Oingo Boingo, and the English Beat.

FD: What are your thoughts on the growing rift between Evangelical Christian Conservatism and Progressive Christian ideology?
RR: Honestly? Anyone can go back and listen to the audio from the tapes of Nixon talking to Jerry Falwell about how they plotted to get Christians in the United States to vote Republican. It’s not a conspiracy theory. You can hear them decide that if they pushed what was normally a tenant of Catholicism — that abortion kills babies — they could create a political movement out of Protestant America. This is the rift. We are almost 50 years into this overwhelmingly evil, abduction of the American Church. And please, don’t think that I have ever believed that Christianity, or the Church, has ever been without sin. There are so many diabolical things that have been done in the name of Jesus Christ in this world. But, I cling to the character of Christ. I know that what He offers is redemption and forgiveness. That He was good on our behalf, and showed us how to treat each other. The rift between these theologies is that one group is afraid of losing power, and the other knows that the greatest power in the world is to love one another. It is the difference between fake Christians and actual ones.

FD: Your kickstarter raised $287,764 — eclipsing the last one you did by around $80K. And the average contribution amount was around $55, which is more than double the average contribution amount across all kickstarter campaigns. Meanwhile Five Iron Frenzy’s activity — touring, recording – has waxed and waned a lot over the years. What keeps your fan base so committed?
RR: French, I have no idea. To be honest, I don’t even like our band. All I can think is that early in our existence, we discovered that our strength was just in being honest. In who we are on stage, and off stage. In how we write our words, and how we speak to people and treat them. I think that’s why people like us? Also, we are nerds, and write about nerdy things. Kids who like that stuff grow up to be doctors and program video games. That helps a lot when you do a Kickstarter.

FD: Tell me a bit of what it’s been like for you as a nurse through this pandemic. Did any of your experiences from that perspective seep into your writing? If so, how?
RR: Oh man. I cannot complain, as I work in management at a nursing home. Everything I have to say will pale in comparison to Sonnie, our guitar player who is a Respiratory Therapist, and my sister who is also one. They have been fighting death 13 hours a day since April. My life has been so easy compared to them. Glasses up, to the front line workers.

FD:  What’s your sense of how the next couple of years plays out in the music scene? Do you think a full rebound is likely or even possible? Do you think the pandemic experience will have a lasting effect on the live music industry?
RR: I think that this will all come out as good in the end. I know that a lot of people are suffering because of the loss of live music, but I think it will come back in droves. Remember the ’90s? People went to shows! Lately, it has seemed like hardly anyone cared. I think that live music will rebound with a vengeance. And I think that a lot of people in the industry have had to become creative about how to get their music out, that they weren’t doing before. I think it will be incredible when it comes back.

RR: Well… We have five songs already written for a new album. I think we’ll take about a year and then start chipping away at the next one. I’m going to finish my Heartwrench album. Hopefully we will get to play shows again by fall.

FD: If you hung it all up today, how would you want the legacy of Five Iron Frenzy to read?
RR: Yikes. That is a heavy question. We did this once in 2003, and I had so much remorse. I always wished we had played less to the Christian market, and more club shows. That I held the truth back less. That I cared less about what people thought of me. If we had to leave a legacy, I would hope that it would be a thousand bands that learned how to treat people fairly, to live and love as Christ did, and to make far better music than we ever could.

You can get your copy of Until This Shakes Apart at www.fiveironfrenzy.com