Why Redtail Ridge is not in Louisville’s Best Interest

As the April 19 special election vote for the proposed mega-development known as Redtail Ridge draws closer, some community members are questioning whether the proposal is in Louisville’s best interest following the Marshall Fire. While this is not the worst plan that has been proposed for the property, Yellow Scene Magazine does not believe the project is as good as it should be. This is also a poor time to put resources toward the development when there are more pressing matters on which the city should be focusing its time, energy, and manpower on. 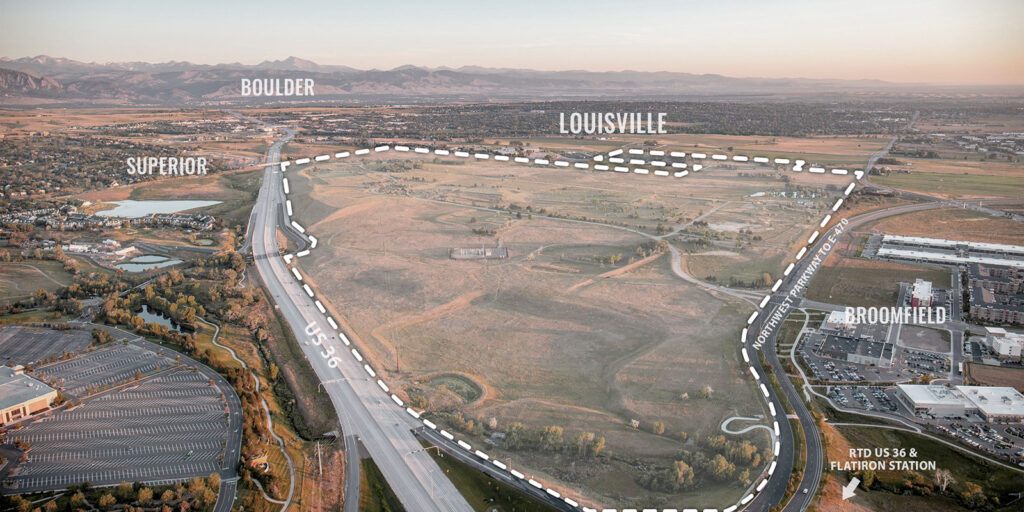 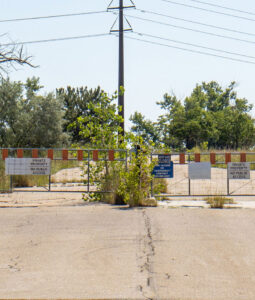 The property in question is located at the intersection of U.S. 36 and Northwest Parkway where Louisville, Broomfield, and Superior meet and is considered prime real estate based on its proximity to Denver and Boulder. If approved, The Redtail Ridge plan would allot more than 3.3 million sq. ft. for a business park. For comparison, that is nearly double the size of the former StorageTek campus (1.6 million sq. ft.) and the Flatirons Mall (1.5 million sq. ft.).

Even though this plot is eventually going to be developed commercially as it was zoned years ago, the evidence says that now is not the time and this is not the best route to maximize the good for the Louisville community. The slowdowns due to the Marshall Fire rebuild and the inadequate sustainability are not a price worth paying for commercial office space that isn’t needed to begin with. 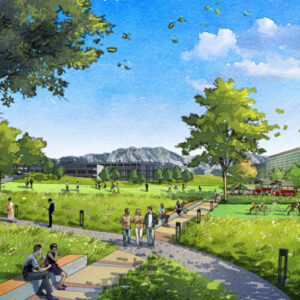 Redtail Ridge could also impact the community outside of the redevelopment process. If approved, the redevelopment would be occurring concurrently with Louisville’s efforts to recover from the devastating Marshall Fire, where 1,084 residences were destroyed and 149 were damaged, according to Boulder County. Since the land is zoned for commercial use, putting residential properties on it is not an option, and Brue Baukol, the developer for Redtail Ridge, is not looking to rezone at this time.

“[Redtail Ridge] will make the housing problem worse,” Louisville Mayor Ashley Stolzmann told YS in an interview. “We already have a job-to-population imbalance in Boulder County, and to further exacerbate that seems counterproductive.”

Stolzmann adds that the project would divert resources away from the city’s recovery efforts at a time when it is struggling to hire more staff. “ We are trying to staff up for the rebuild right now, but there are labor shortages and we’re having a really hard time hiring. So to add this workload, I think, would invariably impact our ability to get work done.”

Opponents of the Redtail Ridge plan like Citizens for a Vital, Sustainable Louisville (CVSL) say the project’s environmental impacts will be too great for the community to bear. For example, pollinators like bees will have a massive food desert due to this development that will have impacts all the way up the food chain. Other keystone species such as prairie dogs are also at risk.

“So in all likelihood, [these species] will be gassed or euthanized somehow,” Justin Solomon, an activist with CVSL, told YS. “And I think they’re thought of as sort of just being pests, you know, they’re everywhere. But actually, their numbers are diminishing greatly. So it’s just not true that they’re such plentiful species that we can afford to wipe out,”

CVSL says this is a misrepresentation of the voting and approval process for such a property. If the no vote wins, the ConocoPhillips plan is not the only alternative and is actually unlikely to be resurrected. The ConocoPhillips plan was approved in 2010 and has never been put into action. If the development company, Brue Baukol, had wanted to move forward with the ConocoPhillips plan they could have done so long before now. In the opinion of representatives of CVSL, the fact they have chosen to work with the city in a long vetting process to get a new plan approved shows that they want to do better and are willing to take the time to get it approved and done right.

The Yes group also advertises on their website that Redtail Ridge would be LEED-certified or better. The LEED rating system is a range with Certified being the lowest ranking, then Silver, then Gold, with Platinum being the most environmentally friendly LEED ranking possible.

However, there are doubts that the project could achieve a meaningful LEED rating given its projected impacts to Louisville’s traffic volume. Brue Baukol commissioned a study from Fox Tuttle, a transportation and development firm, which shows that several areas around the development where traffic would have failing levels of service if the development were to proceed. The Level of  Service (LOS) range from A to F. With the study finding that several areas around the development traffic will be rated at a LOS D or F level, caused by idling cars, and decreased flow of traffic.

The Redtail Ridge website  also refers to the project as having, “the most environmentally sustainable development in Boulder County.” In an effort to be green, the site would have, “the largest solar farm in Boulder County,” according to the website. These solar panels would create three megawatts of energy, which depending on the frequency/rate of the megawatts generated mean the number of homes powered is either three or hundreds. The unclear nature of the description that Redtail Ridge provides on their website leads to confusion regarding how many homes could be powered and this large range of possible power. Since they are not giving specifics, it calls into question how much good these solar panels are actually going to do.

“They even said during the application process it couldn’t be LEED Gold,” shared Stolzmann. The plot has poor access to transit, and lots of emissions associated with cars, and the best they could qualify for is LEED Silver. “So by their own application material, it is a bad location for an office park from the transportation emissions standpoint.” 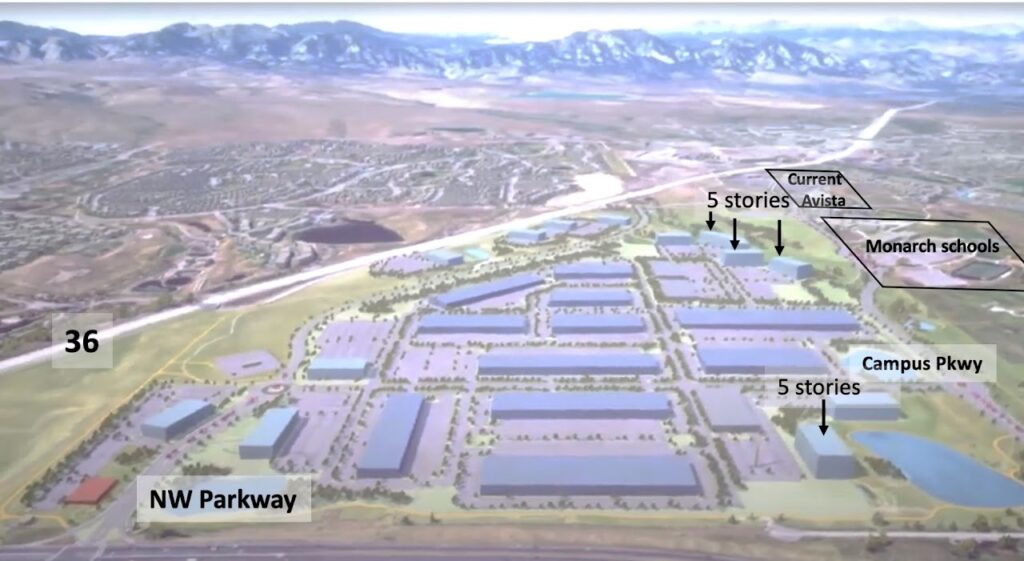 But the Yes group also contends that the redevelopment is necessary for Avista Adventist Hospital to expand. Yes for Louisville’s website says, “The anchor tenant at Redtail Ridge will be Avista hospital,” and then continues that the hospital and other future tenants will not want to work in, “an abandoned Kohl’s warehouse.” However, this is a misrepresentation of information, no one is suggesting that Avista hospital move into a currently vacant former box store. What is being suggested is that other businesses, who would be building a similar space anyway, ought to utilize the already constructed buildings instead of time, money, and resources going into new ones.

Avista said in a statement that its plans to expand are not contingent on the approval of Redtail Ridge. “If the referendum passes, the development will include land zoned for a hospital,” the statement reads in part. “If it fails, we would be willing to explore obtaining the appropriate zoning approval with the city directly.”

Similar to the Avista expansion, the extension of Monarch Campus Dr. from Monarch PK-12 to 96th is not contingent on this plan passing. The No group is actually in favor of an expansion, just not in the way the Redtail Ridge plan outlines it to happen. Sherry Summer, the registered agent for CVSL, said that they are against, “not the existence of Campus Drive but the configuration of it and the size.” 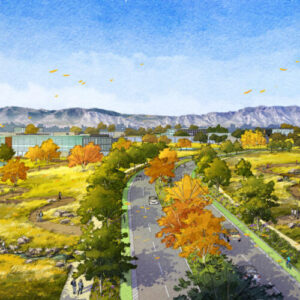 As an alternative, Heather Gardner, also from CVSL, suggests that the expansion be a two-lane road instead of four lanes. This way, it will fulfill the need for another access point in the case of an emergency but it won’t invite people to use it as a shortcut across town, creating traffic problems. Some people have suggested this expansion should be gravel, but Gardner is in favor of, “a paved, emergency exit, back way to Monarch.”

Stolzmann added that Louisville is considering amending its building code so that commercial developments would have to be more environmentally friendly than Redtail Ridge. The city council is expected to take up the amendments in either June or July.  “If we adopt those requirements, that would make any development much greener than what’s proposed,” Stolzmann said.