A Journey Under the Sea in Landlocked Colorado

Many people have seen, or even grew up watching, the 1989 Disney version of The Little Mermaid and are familiar with Ariel and her desire to, “be a part of that world,” by bargaining with an evil sea witch to exchange her mermaid tail for legs. Little did Ariel know those of us in “that world” want to be part of hers. The Little Mermaid Cocktail Experience is a chance to do that without learning to scuba dive or bartering with your voice. Although, this version more closely follows Hans Christian Anderson’s version and is influenced by audience interaction.

This event is a Fever original. Fever is a collection of the most exciting live events in particular cities that you wouldn’t find on Ticketmaster or Stubhub. After a while, they started hosting their own events instead of just compiling pre-existing ones.

If you’re already intrigued, be warned there are spoilers in this review and skip to the last paragraph for more information about attending.

This event is 21 and up only (don’t forget your ID). The actors don’t mind dropping the occasional swear word and the themed beverages are alcoholic. An elevator whisks you to the depths of the ocean (the traditional method, of course) where a pirate greets you and entertains you with monologues until you are shown to your table. 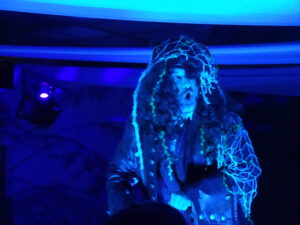 The ocean is decorated with blue, purple, and green lighting, fishing nets, holographic colored panels, shells, and even has a pirate’s ship in one corner. The tables are elegantly set with glasses, a bottle of water, a bowl of snacks (goldfish, of course), and a glowing sea sponge. 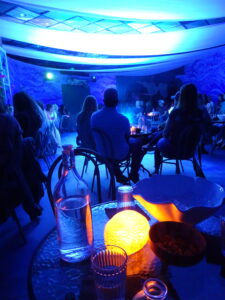 Once the audience completes their journey under the sea and to their seats, the pirate returns to warn you against falling in love with a mer-king — unless you fancy wandering the depth of the ocean, that is. As he tells his story, a shell is deposited on your table with sphere-shaped, corked bottles on ice. The first cocktail, The Enemy’s Anemone, has arrived. 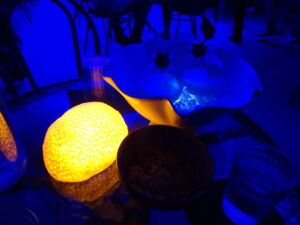 Next, Pearl, the little mermaid, makes an appearance. It is her 300th birthday party and she is so excited for all of her fish friends to be there with her. She interacts with the audience and imagines all of the things she could do on land if she had legs. When Pearl asks for suggestions of what she ought to do on land, one audience member suggests she tried skiing, a concept foreign and fascinating to Pearl. 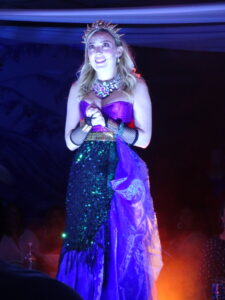 Pearl’s father, the mer-king, forbids her from going to the surface or going to see the sea witch. Naturally, as soon as he leaves, she sets off to pay the sea witch a visit. 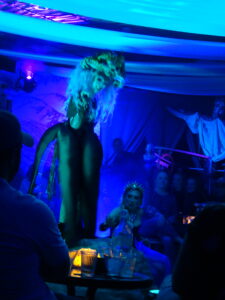 The sea witch knows exactly why Pearl has come and is prepared to help her, for a price. No, no, no, not for her voice. That story is copyrighted. One of Pearl’s audience fish friends is kind enough to display a talent to entertain the sea witch and a deal is struck, Pearl shall get her legs and explore the land. A server delivers a chest of potion ingredients to your table that you’ll use to help the sea witch brew her potion. 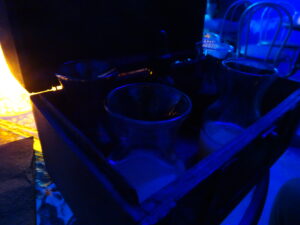 Inside the chest is a red bottle and a yellow bottle — your blood of eel and your jellyfish sting tonic. After you mix those together you’ll add three drops of blood of a sailor’s soul, repeating the magic words the whole time you mix. Ta-da! You have successfully helped the sea witch brew a potion, The Wicked Undertow, to grant Pearl’s wish, and it doubles as a cocktail.

Alas, at just that moment a storm strikes at the surface and causes a prince’s ship to wreck plunging him into the depths. Pearl begs the sea witch to save him since she doesn’t think he can breathe underwater. The sea witch says they can change the terms of their deal, but it would mean giving up getting her legs. 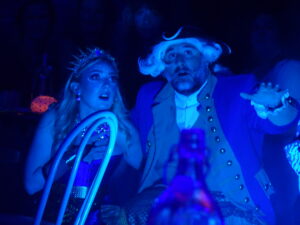 Pearl agrees to the sea witch’s new terms and the prince is saved and granted the ability to breathe underwater. Now they only have 48 hours to fulfill the rest of the agreement’s new terms, marriage, to avoid disaster! 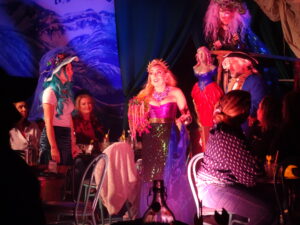 The third drink is called Pearl of the Sea and features a mermaid tail stirring stick and an edible flower. It is safe to say they saved the best for last with this cocktail. 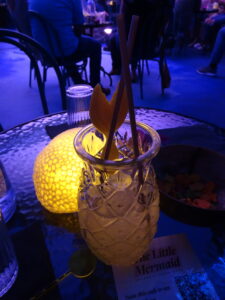 With multiple shows in a night, they do have to keep things moving after the curtains close to prepare for the next showing. There is time for you to snap a picture with the boat and other props on the way out though. 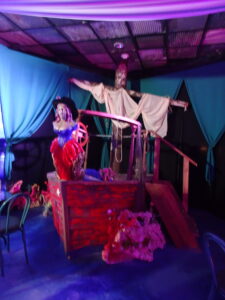 If you’re intoxicated, there are numerous restaurants in the Denver Pavilions and along 16th St. where you can get some food so that you’re not hopping behind the wheel before you get your land legs back. If you have a safe ride home lined up, then it’s an excellent opportunity to indulge in even more cocktails.

The Little Mermaid Cocktail Experience runs through the end of April and into May on Thursdays, Friday, Saturdays, and Sundays at the Denver Pavilions. There are multiple show times a day at 6:00pm, 8:00pm, and 10:00pm for $68 a ticket. The event is an hour and a half long. Parking is primarily street parking, so be prepared to feed a meter or pay to be in a lot or garage. If you can’t make it to one of the remaining dates, Fever hosts other events worth keeping an eye on. 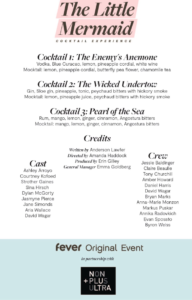