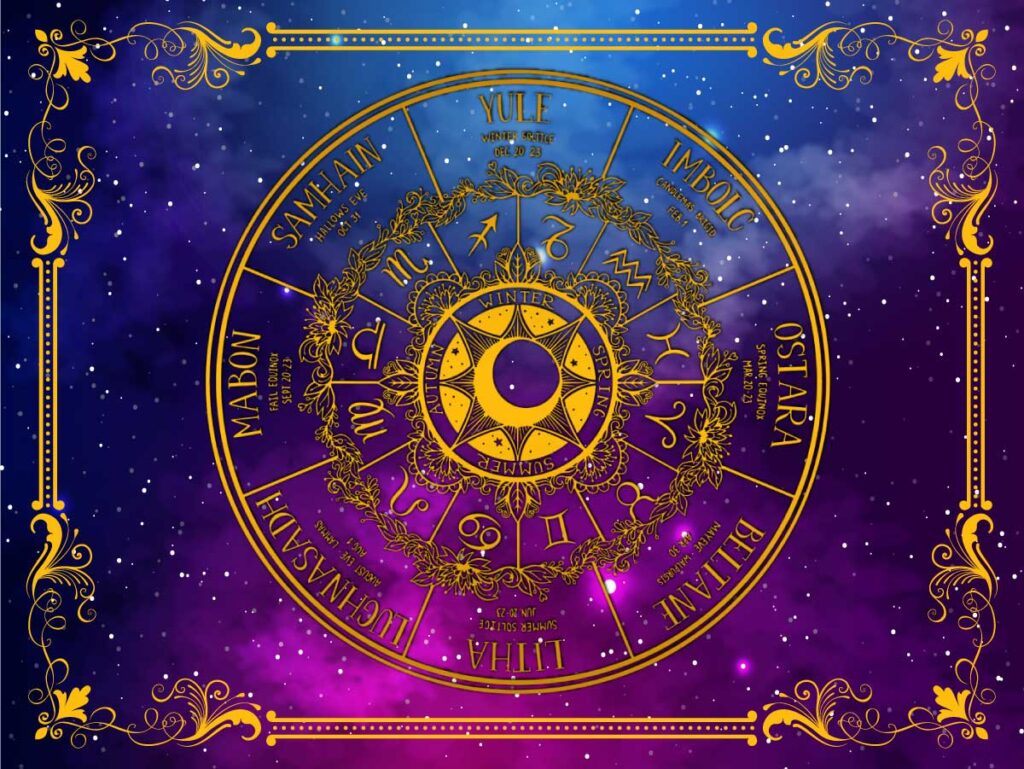 I think that my true appreciation for spring, as a season, began in March 2020, amidst the COVID shutdown. I was jogging — my new favorite pastime and seemingly the only activity that allowed me some fresh air. I rounded into a clearing of a snow-kissed meadow and saw a blue robin’s egg glittering in the snow. I held it carefully in my hand with the intention of adding it to my altar. I should mention, I am a witch, and I take that title very seriously.

As I arrived home to place my new treasure amidst my stack of candles, totems, and tarot cards, I pondered the pandemic and the shutdown, as my mind had done a hundred times before. This time, for once, it was a joyous thought that had entered my mind. Despite all that anguish, all the pain and fear and death that the human world was currently experiencing, despite the fact that life as we knew it was grinding to a frightening halt, the outside world seemed surprisingly unaffected. Spring came all the same, as it always has. The Wheel of the Year, as it is referred to in Pagan practices, keeps turning evermore.

This thought process is the basis of Paganism because Paganism, in its purest form, is the practice of honoring the cycles of this Earth: life, death, and rebirth. In doing so, we then learn, in turn, to honor those cycles within ourselves. We all have a springtime — fresh sprouts that begin to share our new leaves with the world. Then summer follows — we grow into our adult bodies and gain a knowledge of self. Then, into fall and eventually winter, where the luckiest of us are able to spend our golden years quietly gazing out at nature, watching the seasons go again around the wheel, turning all around us. So, if we were to bring this idea back into Paganism, springtime is symbolically a time of birth and renewal.

The Wheel of the Year is divided into eight parts. The axis falls on summer and winter solstice, named Litha and Yule respectively.

These are the longest and shortest days of the year in terms of sunlight. Next, you cut the equinoxes, which fall directly between the solstices. These are the fall and spring equinoxes, called Mabon and Ostara. Then, the tertiary sabbats fall directly between each of those, and these are: Imbolc, Beltane, Lammas, and Samhain, which flow into the Wheel, giving us eight distinct sabbats or festivals. Now, why are these important, and what do they have to do with the practice of Pagan witchcraft? To explain this, we must first understand how these sabbats came into being.

Each of the sabbats is the culmination of many different holidays and practices from around the world. What is so fascinating is the fact that many cultures celebrate similarly despite the vast geographical distances. One such example is Yuletide Balefires, a ritualistic fire built with the purpose of willing the sun to return during the darkest and coldest part of the year. Balefire practices took place in many early European countries and date back thousands of years. Similarly, worship of fertility symbols, such as rabbits and eggs, can be found across a wide span of human cultures.

Humanity has, for so many centuries, been agriculturally based. Agriculture is, arguably, the greatest reason that we have thrived as a species.

Our ability to manipulate and support the creatures and plants of this Earth around us is the reason that humanity has made it this far. However, I believe that somewhere along the way, in more recent history, we have become frightfully disconnected from this process. As the age of media takes over our minds and assaults our senses at every turn, the connection that we once had with nature, both the physical and spiritual connection, has begun to dwindle and has thus created a decline in Earth-worship practices. In a way, we almost have to distance ourselves from Mother Earth — We are aware of what our pollution is doing and how difficult it is for her and her ecosystem to cope with the damage. In some ways, to look too closely at her is to be in pain, as she is.

You see, religion has for many millennia been making a major shift. Old religions and Pagan traditions (Paganism is not one rigid religion but rather a melange of practices from around the world spanning thousands of years) were very ‘down-and-in’ religions, which focused on the Earth, her cycles, the dirt beneath our feet, and the animals we raise in exchange for their meat, milk, or eggs. Modern religions focus more on an ‘up-and-out’ mentality, meaning that the godhead or spiritual world is upward, in space or in the heavens, away from this almost ‘ball-and-chain’ of Earth.

As we shift from more hands-on, smaller agricultural practices into more industrialized ones, we see a shift in humans as well.

I once heard human beings described as the ‘shepherds of the Earth,’ a phrase which has stuck with me for most of my life. I believe that we were, as part of our evolution, entrusted with maintaining and even bettering our planet. Our dependence on plants and animals is undeniable, yet modern humans shy away from this truth. We have no idea where most of our food comes from. We no longer remember which wild berries are edible and which are poisonous. We deliberately kill some of the world’s most potent pain management plants, calling them weeds and spraying them with harsh chemicals to make room for grass, which has no purpose to our lives beyond aesthetics.

When you sum all of this up, it is no wonder that the human world is finding itself so painfully disconnected from the Earth. If we see ourselves as being atop the Earth and worshiping forces which exist above us, it releases us, in a way, from having to look down on the Earth. Paganism, in essence, is the practice of forcing ourselves back down, back to the dirt, back to basic agricultural practices. It is the practice of seeing the Earth as she is, frigid or blossoming, and celebrating each season as necessary and beautiful.

The modern Pagan struggles with many of the traditional practices, as almost every sabbat and style of worship is centered around the natural world. Specifically, which animals and plants would have come to fruition, which animals were up for slaughter, and where the sun was situated in the sky – showing us where on the wheel we ought to be at any given time. In paganism, there are three harvests: Lammas, Mabon, and Samhain. Each harvest represents a specific plant that comes to fruition at that time. The most classic and recognizable sabbat, Samhain, worships the harvest of pumpkins, falls on Oct. 31, and is synonymous with, you guessed it, Halloween. It is no secret or surprise that almost every Pagan sabbat has a correlating holiday that we already celebrate in Western culture. Almost every modern holiday has Pagan roots, and the most notorious of these ‘witchy’ festivals is Halloween, which has long been associated with symbols of Paganism and Wicca.

The iconography of ‘witch’ has been reduced to a single image of an elderly woman, a hag, with no purpose or identity beyond scaring small children.

So many things that we associate with Halloween, such as the cauldron and the broomstick, are Pagan iconographies, dating back to a time when Pagan women fought to continue their practices of witchcraft under the guise of religious and governmental overthrow of Pagan religion. Cauldrons and brooms became extremely popular tools among witches because these were common household items women used and therefore did not raise suspicions. The cauldron has long been a symbol for the ancient womb of creation, and several deities, such as the Celtic goddess Cerridwen, are often depicted stirring a cauldron, a symbolic grand womb for souls. The broom became a type of wand, a tool used to sweep energy around or wield.

Looking at springtime, we see symbols such as eggs, rabbits, and bulb flowers, which are associated with Ostara, the spring equinox. This is a time that represents the ‘rebirth’ cycle of the Earth. Rabbits, birds, and other animals are producing their young at this time, and the early flowers are beginning to blossom again. These ubiquitous symbols make spring one of the best and easiest times to start aligning ourselves with Earth worship. This is what spurned my excitement about adding more agricultural practices into my life and into my spirituality. In fact, I do not see much of a difference between my agricultural and spiritual practices. They are one and the same in Paganism. After all, Paganism is simply the worship of seasons, and seasons are at the root of all agricultural practices.

I live in suburbia and have difficulty feeling close to the Earth in such a human-designed place. I have, throughout the years, found ways to keep my connection to the Earth and to farming, even in small ways. Here are a few options to inspire you to become more connected to the world around you.

• The first, and in my mind, most important step, is to consider growing food rather than ornamental plants. The really special thing about planting and harvesting in conjunction with Pagan sabbats is that they really do line up almost perfectly with their respective sabbat. Lammas, the corn and grain harvest, occurs in August, when my first ears of corn are beginning to emerge. I cannot express to you the excitement of watching my garden blossom. Pulling pumpkins from my garden just before Samhain brings such immense joy. I have only one medium-sized garden bed for growing and still manage a surprising yield.

• Another great option for the backyard farmer is poultry, specifically chickens, where allowed. I have kept chickens my entire adult life, and besides being one of the most hilarious and cheerful reasons to get up in the morning, my girls keep me connected to the cyclical nature of the year. Eggs are plentiful in the spring months as are new chicks (if I am so lucky). Then, my girls will molt and stop egg production as the weather grows cold. Even this very small act of agricultural awareness brings me closer to my food and to my practices. The joy of eating a fresh egg smothered with homegrown herbs is beyond description. Some folks do not have the luxury of yard space, in which case, I would recommend keeping potted herbs or seasonal plants.

In the end, I find that even the simplest acts like growing food or herbs can help move us toward a more ‘down-and-in’ process of spirituality and a stronger connection to the Earth and soil. If you are interested in Paganism, then I highly recommend the beginner book “The Sabbats” by Edain McCoy. This is a wonderful piece of literature with historical backgrounds, practices, and even recipes for each Sabbat, and it can help you explore becoming a modern Pagan witch, if you so desire.