I am so lucky to have been chosen for the opportunity to live at Warren Village. Founded in 1974, after seeing an influx of single-parent families in poverty and homelessness, as well as experiencing domestic abuse, Dr. Myron Waddell (1938-2017) made the effort to create a temporary home for the intentional community of building self-sufficiency for these families.

Today Warren Village is a HUD low-income program that lasts up to three years. During the stay, single parents must report to their “Family Advocate” to track goals and apply resources, as well as attend mental health counseling and life-skills classes, which include journey mapping, Yoga, financial coaching etc… They must also have a full-time occupation as a student or working. There is a high-quality rated child-care center and school for ages 6 weeks to 10 years, located on the first floor of the apartment complex, so parents can conveniently drop off and pick up their children as needed. Most of the residents at Warren Village are people of color, including members of indigenous tribes, refugees and immigrants. 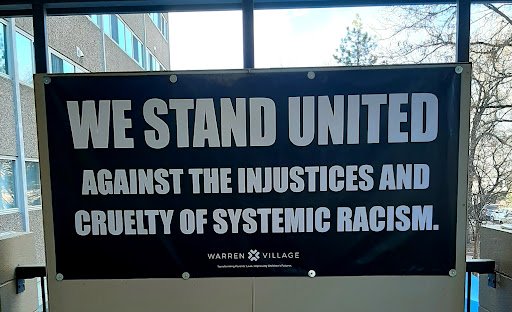 It was not an easy process to get accepted into Warren Village, for me anyways. I applied and my application was denied, however they encourage people to appeal their denial, which I did- and that process included writing an essay, providing a resume’ and getting three letters of recommendation. Once that went through, I had one more step before acceptance, and that was to attend and pass an “Empowerment Class,” where myself and other applicants reviewed their efforts and opinions about being an empowered single-parent. I am so glad that they enjoyed interviewing me and thought me to be an efficient candidate.

I was living in a women’s shelter when I came back to Denver in July, after living in New Mexico with the baby’s father. Eventually Colorado Coalition for the Homeless gave me a motel voucher for being at high-risk for covid because of my pregnancy, and I lived in the motel for a few months until I finally got to move into Warren Village at the end of October. I applied for the Fall 2020 semester in August, at Community College of Denver as a full-time student- so I could keep myself busy and make sure I was already fulfilling Warren Village requirements even though I was not sure if I would be accepted. I have enjoyed my semester, despite the ups and downs of being in a homeless situation, the pregnancy, and had intense bouts of depression here and there.

I am so thankful to finally have a stable place of living that includes a program that ensures building self-sufficiency for my family. I just recently had to file a restraining order against my baby’s father, as it became apparent that there is no way we can get along, as much as I wish we could, some things just are the way they are- and even though we are apart, I wish for peacefulness and mediation as much as possible. War is a difficult concept- I have sought to understand what it means,  given my namesake, Athena, a goddess of war, and found that wisdom tends to be the only thing that can really understand it and minimize its destruction. I know I was-dumb, trying to turn it into wisdom. When I saw the name Warren Village, I felt it had to be, so I really tried my best to get in, and I will try my best to be approved for all three years while accomplishing a B.A. in Transformative Advocacy from Metropolitan State University.