10 YEARS — ‘It stays with you’: Aurora police chief looks back at response to theater shooting 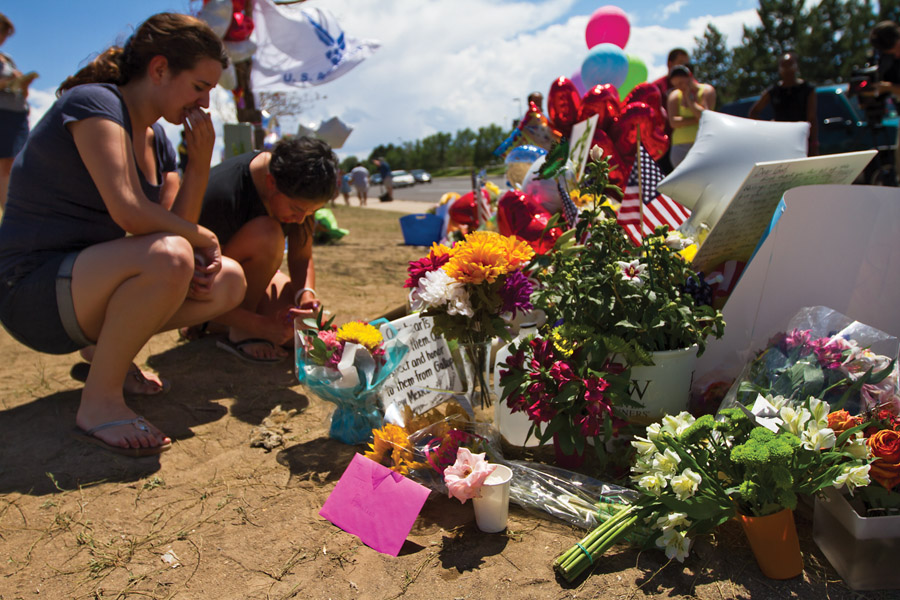 Supporters of the Aurora community light a candle at a memorial site across the street from Century 16 theater Sunday afternoon, July 22, near South Sable Boulevard and East Exposition Avenue. A gunman wearing a gas mask and body armor opened fire in a crowded Aurora movie theater with an assault rifle, shotgun and pistol during a midnight showing of “The Dark Knight Rises” movie killing at least 12 people and injuring more than 50 others. (Marla R. Keown/Aurora Sentinel)

Editor’s note: This story was originally published by Sentinel Colorado and was shared via AP StoryShare. It was written by Max Levy. Levy works as a Sentinel staff writer.

On the evening of July 19, 2012, Aurora’s Police Chief, Dan Oates, returned home to get some rest after a hockey game. Twenty minutes later, not long after midnight, he was woken up by a phone call from his deputy chief, Terry Jones. “It was the only sleep the cheif would get before responding to what Oates now calls “the most cataclysmic event of our professional lives.”

“Terry said, ‘There’s been a shooting at the mall, and it’s pretty serious,” said Oates, who left the police department in 2014 and returned earlier this year to serve as interim chief. “We were speculating that it was two gangsters shooting at each other. And I remember he said, ‘It sounds pretty chaotic over the radio. I’m heading over, and you’d better head over, too.’”

Located near the Town Center at Aurora mall, the Century 16 movie theater was hosting a midnight screening of the new Batman film that night, and Theater 9 was packed with as many as 400 eager moviegoers.

Oates arrived to a chaotic scene. An officer briefed him on the situation and delivered the grisly news: a dozen people had been fatally shot in Theater 9, and an unknown number were wounded. Police had begun rushing gunshot victims to the hospital in squad cars after ambulances were unable to reach the theater in the scramble.

Officers were also still searching for a second shooter, unaware that James Eagan Holmes, who had already been taken into custody, was the lone gunman.

The number of wounded was eventually pegged at 70, including those injured by bullets and tear gas grenades fired by Holmes, as well as those hurt while trying to escape.

Oates called Jim Yacone, who was then in charge of the FBI’s Denver Division, to report what he feared could be an act of terrorism.

“I remember telling him, ‘Wake up everybody. We need every federal agent you can get here, because this is massive,’” Oates said. “We also knew that the suspect — I try never to use his name — but the suspect had told us about IEDs and his apartment being loaded with explosives.”

He also called George “Skip” Noe, at that time Aurora’s city manager, to tell him what was happening at Century 16; Noe said he would alert the city’s elected officials.

“And then it was hours of just managing the incident,” Oates said. “There’s a lot of that evening that’s a blur, still.”

For police and the more than 1,000 people who were in or near the theater when Holmes opened fire, the night was far from over. Faced with interviewing a massive group of potential witnesses, police arranged bus transportation to Gateway High School, which served as a reunification point for many families as well as the place where some learned of the tragic deaths of children, siblings and friends.

Oates spoke emotionally about driving to Gateway to meet Mike Hawkins, the Aurora officer who carried out the body of 6-year-old Veronica Moser-Sullivan, who was shot along with her mother, Ashley Moser. Ashley survived; her unborn child and Veronica did not.

“I went to Gateway, not as the chief, but to find that officer,” Oates said. “I had this need to find this officer and just give him a hug. … It was the right thing to do.”

Detectives from the Aurora Police Department and the FBI interviewed hundreds of witnesses through the night and into the morning of the 20th.

The chief returned to police headquarters at around 5:30 a.m. At the time, he said the telephones of the department’s public information officers were unusable because of the volume of incoming calls from media outlets as far away as Sydney and Beijing.

That morning, bomb experts from the FBI, ATF and Adams County also began dismantling the jungle of complex explosive devices rigged inside of Holmes north Aurora apartment, which contained computers and other potential sources of evidence.

Oates described the team as “a wonderfully coordinated effort” and an example of one of the ways law enforcement worked to bring Holmes to justice and avert further harm — after two days of work, the group would successfully disarm Holmes’ apartment with no injuries and with minimal damage to the apartment itself.

Once Holmes’ Paris Street apartment building was evacuated, the mood turned from terror to grief, as the community of Aurora mourned the tremendous loss of life at Century 16. President Barack Obama met with survivors on July 22 and delivered a speech at University of Colorado Hospital, joined by Oates and elected officials.

That was 10 years ago. But for many of the people who were present or knew someone who was injured or killed in the Century 16 shooting, the events of July 20, 2012, can feel like yesterday.

“It just stays with you,” Oates said. “Everyone in this town knew somebody in that theater.”

Some elements of the Aurora police response, like the in-the-moment judgment to transport 27 victims using police cars when ambulances were unavailable, have been praised and, according to Oates, incorporated into the policies of police departments across the country.

A third-party review of the police department’s handling of the incident specifically notes that “if the police cars had not been used for rapid transport of seriously wounded victims, more likely would have died.”

Oates said the shooting also drew the department’s attention to the need to establish a unified command structure between police and firefighters if another event like the July 20 shooting was to take place.

Unfortunately, mass shootings have continued to claim lives in Colorado and across the nation — less than five months after the events in Aurora, another lone gunman killed 26 young children and school employees in Newtown, Connecticut.

“I felt that we were sort of climbing back to normal,” Oates said. “And then Sandy Hook happened, and I felt there was this collective depression here in the city to watch another community go through that horror.”

Oates said he was skeptical of the ability of gun control laws passed since 2012 to curb incidents like the Century 16 shooting, calling Colorado’s red flag law “only moderately helpful.”

While he said he believed the Federal Assault Weapons Ban, which lasted from 1994 to 2004, may have had an impact on mass shootings, he said he wasn’t sure if another similar ban would have the same effect today.

He remembered “seething” after being asked a question about gun control policy at the first press conference following the shooting.

“This horrific event had occurred to my community, and I was wondering why is it that the only people and the only time we ask about gun policy are police chiefs after mass shootings?,” he said. “Why weren’t we as a society facing up to that issue long long before?”

What he does know is that, during the worst night of many Aurorans’ lives, the city’s police acted professionally and with courage.