Editor’s Note: Press Releases are provided to Yellow Scene. In an effort to keep our community informed, we publish some press releases in whole. This article was originally published on Sep. 12, 2022 at coloradolab.org by the Colorado Evaluation and Action Lab.

We are excited to share the launch of prosecutorial data dashboards in Colorado! These new publicly-available resources are designed to promote more effective, just, and transparent decision making in prosecution.

The dashboards were created through the pilot phase of the Colorado Prosecutorial Dashboards. The project is a collaborative effort between the Colorado Evaluation and Action Lab, the national Prosecutorial Performance Indicators (PPI) project, and the eight judicial districts in Colorado participating in the pilot. The project was funded with a grant from the Microsoft Justice Reform Initiative and supported by data stored and shared by the Colorado District Attorneys’ Council (CDAC).

On September 8th, the project partners gathered at the History Colorado Center in Denver to meet with key stakeholders and members of the media to unveil their dashboards. As a bi-partisan effort, the event celebrated Colorado as the first state in the nation to move toward statewide use of data to improve decision-making in prosecution. Watch a recording of the press conference.

Click on the links below to see each district’s data dashboard.

At the event, Don Stemen, PhD, Loyola University Chicago professor and co-manager of the PPI told the audience that the move to create prosecutorial data dashboards was sparked by public demand for greater accountability and impartiality, along with a focus on community wellbeing and fairness. “Increasingly, prosecutors are expected to take proactive, engaged responses to community problems, reduce disparities in justice outcomes, build greater trust through community engagement, and increase prosecutorial transparency and accountability. This requires robust data-driven prosecutorial work,” Stemen said.

Prosecutors worked together with researchers, with input from their communities, to create the data dashboards. Community members can access the data to gain a better understanding of the work their DA’s office does, including trends in cases filed and resolved over time, patterns in how individuals are treated, and how they are addressing serious crime and protecting and serving victims. Dashboard developers recommend looking at different data points in relation to one another to see both what is happening and to understand the why behind trends and patterns.

“As elected District Attorneys, both Republican and Democrat across rural and urban districts, we believe robust data is needed to identify and prioritize the actions we can take to improve community safety, the justice system, reduce disparities, and make sure we are treating defendants and victims fairly. Until now, though, most DA offices have simply not had the ability to aggregate, review, make meaning of, or share information publicly.” 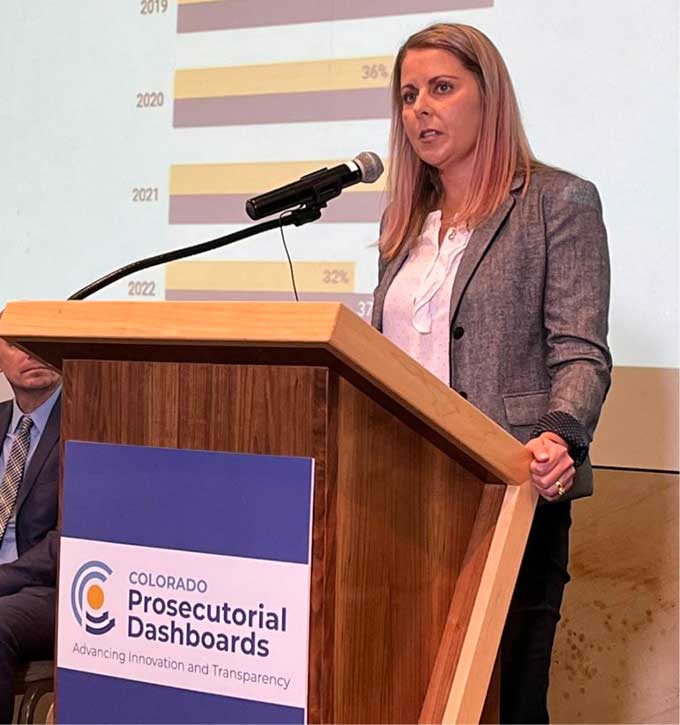 “There is a commitment in Colorado generally, and certainly among the judicial districts, to data-driven decision-making,” said Lauren Gase, PhD, senior researcher and project director for the Colorado Lab. “The dashboards are a way to take the data from the case management system and make meaning of it. This includes improving their understanding of case outcomes for similarly situated defendants, identifying promising practices and programs, and determining areas where additional training could be useful.”

The Colorado Lab and the PPI continue to work with the initial eight judicial districts to track progress toward greater efficiency, effectiveness, and fairness. Following this initial phase, tools and infrastructure are now being developed to scale up use of the dashboards statewide.

To learn more, please reach out to Dr. Lauren Gase.