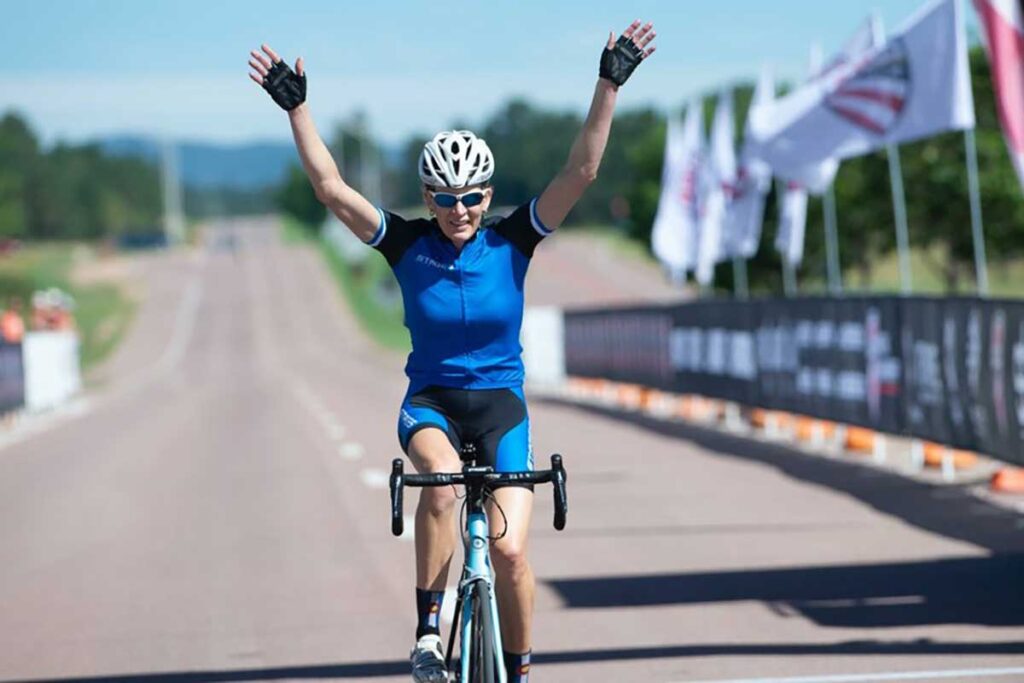 A Jefferson County jury awarded $353 million in damages to the estate and husband of Colorado champion cyclist Gwen Inglis in the case of her death by a driver under the influence.

The driver was Ryan Scott Montoya, 31, who struck and killed Inglis in May of last year on Alameda Pkwy in Lakewood and had marijuana, meth and Xanax in his system at the time of the crash, according to court records.

Montoya pleaded guilty to vehicular manslaughter – driving under the influence in April, and was sentenced in June to eight years with eligibility for parole in 2025.

The day of Gwen’s death

“She was a champion gal like nobody’s business,” said Mike Inglis, Gwen’s husband. “She was just the epitome of what a good kid could ever be.”

The day of the accident was cool, overcast Sunday morning, Mike explained. He and Gwen had just finished a 45 minute ride around the Green Mountain park in Lakewood — a warm-up for Mike’s race later in the afternoon.

“That bike path around Green Mountain is just beautiful, and that’s where we live,” Mike said. “And we can just see all the mountain bikers on the mountain, it’s just truly a blessing to be there.”

Gwen had injured her ankle the previous weekend and wasn’t competing, instead riding for another hour after Mike.

He described Montoya’s tires barely not crossing the bike lane’s line when he almost hit him. Mike turned to another cyclist who was passing by: “I say to that guy, ‘That dude is going to kill somebody,’ and the dude goes ‘No doubt.’ And then three seconds later [Montoya] crossed directly over that white line for a foot and a half and just plowed Gwen.”

“I would have been home in six minutes,” Mike said.

“We feel that far too often drivers are not punished for hitting cyclists,” said the family’s lawyer, Megan Hottman, a fellow cycling professional and teammate of Gwen. “We see all the time that people don’t even get jail time, they get a light slap on the wrist.”

The Inglis family had filed a civil lawsuit against Montoya only a week after the accident, the verdict of which was released Dec. 6 awarding the family $353 million. According to Hottman, the goal of the lawsuit was to “deter others from this conduct and to hopefully save other cyclists’ lives.”

Hottman elaborated that a specific amount for damages was not asked for in the lawsuit, wanting the jury alone to decide how serious to take the case. “So, the jury sent a very strong message that this is not behavior that they tolerate,” she said. “And as members of the Jefferson county population, that sends a really strong message to the entire county.”

According to CDOT statistics, for the year leading up to the May accident causing Gwen’s death, there were at least 113 car crashes involving a bicyclist in Jefferson county — three of those were fatal, not including Gwen’s. There were ten total crashes that May alone. Since then, there’s been at least an additional 169 crashes, one of which includes Hottman herself.

In June she was hit while cycling and badly injured, appearing at Montoya’s sentencing hearing in a wheelchair with a broken shoulder and a broken knee. “I hadn’t undergone surgery yet, that was two days after I was hit, and I spent most of my summer in a wheelchair and using a walker,” she elaborated.

She believes there needs to be both better infrastructure and tighter laws and punishments for DUIs.

“The eight years was a very dissatisfying sentence,” Hottman said. “Montoya is parole eligible in 2025. So, he’s only going to do a few years and then he’ll be back out.”

According to Mike, Montoya stated in court that he was unaware of the Colorado state law requiring drivers to stay three feet from cyclists while passing them.

“You get taught that,” Mike said, whether from driver’s education or otherwise. “But there’s no refresher in society.” He sees this lack of education as a major avenue for improvement for safety. “Maybe that’s what we’re lacking, there’s just nobody educating the general population on things that should just be good etiquette.”

Infrastructure is another. Rumble strips to alert a driver they are drifting into the bike lane, and painting those lanes a bright color like green are cheap, easy improvements Mike believes could have prevented Gwen’s death. Commenting on painting the lanes, it allows driver’s to be more confident as they know where a cyclist’s path is, and when it may be crossing the road.

More so, he believes restrictions need to be tightened for driver’s with DUIs.

He wants to see minimum insurance increased for repeated offenders, pointing out that the insurance payout from Montoya didn’t even cover Gwen’s funeral costs. He also highlighted that Montoya had been arrested for a DUI ten days before striking and killing Gwen.

According to court records, the incident happened in Gilpin County, and Montoya pleaded not guilty.

“How does he have his driver’s license? How’s that even possible? Nobody on the planet would say that is a good idea, but here we are,” continued Mike.

The $353 million verdict breaks down into three categories: economical, or lost wages from Gwen’s death; non-economical, or emotional damages; and punitive, or the punishment and deterrent for others breaking the law.

Mike highlighted the emotional damages, saying, “It’s for the pain and suffering for me having to breathe into my wife’s mouth on the side of the road as they turn blue. That’s probably not one of the best things that a military paramedic ever wants to have to do, but that’s what I ended up doing.”

The deterrent charge was the highest though, at $250 million, as Hottman pointed out, with hopes that it makes an impact as well.

“If the general public feels like they can cavalier around cyclists and they don’t have to drive safely around them because they don’t fear going to jail, we were hoping that a civil verdict in this size would be frightening and scary and sobering enough that people will think twice about how they drive around cyclists,” said Hottman. “And more generally, they will think twice before they get behind the wheel if they’re impaired.”

Colorado Community Media is a network of more than two dozen print and online publications in eight counties around the Denver area.