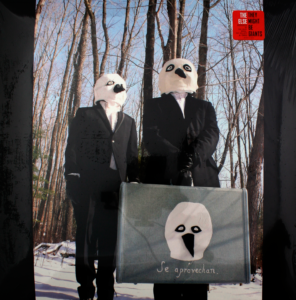 Looking at the musical landscape, you’d be hard pressed to find a New Wave band that’s been playing for 25 years, recording new and relevant material, writing TV theme songs and children’s records, and doing it all without sounding stale or rehashing what they’ve done previously.

But that’s exactly the case for They Might Be Giants, who, at the end of the day and after 14 albums and myriad additional accolades, are simply just that. A New Wave band.

“That’s all we really were—a New Wave band that came along about five years too late,” says John Flansburgh, half the erstwhile duo known for earning a Grammy for the “Malcolm in the Middle” theme and writing that ridiculously catchy “Istanbul (Not Constantinople)” song every high school drama club geek in the’90s knew by heart.

It’s been 25 years since this John and the other John (Linnell) started this experiment, which caught on thanks to Dial-A-Song (they set up a phone number with an answering machine that played songs. The gimmick turned out to be the one that put them on the musical map). And they’re every bit as marketing-savvy today as they were in the Cold War-era.

Their latest outing, The Else, was pre-released on iTunes months before the album made its way onto store shelves last July. It’s an unusual move, and one that actually paid off pretty well. The album jumped to number one on the Alternative iTunes charts and stayed there for three weeks.

“The iTunes thing itself isn’t that unusual these days,” Flansburgh says over the phone from his home in the Williamsburg neighborhood of Brooklyn. “Although I guess doing it more than a couple weeks in advance is a little unusual. But it’s the best of a limited number of options we have. There’s so many different levels of consciousness about (digital music) technology out there; for the casual person, iTunes is still an emerging technology they’re not familiar with, for the very tech-savvy, they’ve got issues with the way iTunes (handles Digital Rights Management). But we’re just trying to figure out how to deal with the long advance time with magazines and promotional copies, and not be pirated in advance.”

It’s an honest take and a pretty smart way to try and find a means to make a living when the music-buying public seems so intent on stealing it. Or at least, that’s what the RIAA keeps telling us.

“It’s frustrating for us,” he says. “On one level, we want to make our fans happy. We’re not too hung up on giving stuff away.” Which is very true; the band offers up more free music than anything you’ll find on MySpace between their regular podcasts and free downloads. “But ultimately, it is how we make a living. (With The Else), we tried to find a way to participate materially in the release, limiting the length of time between having something piratable on the web and the actual album release.”

Meanwhile creating a product worth buying is another factor, and one the duo seems to be able to do in its sleep. The Else was co-produced by the Dust Brothers, who has produced albums by artists ranging from Hanson to the Rolling Stones to Beck, and the end result is a collection of smart pop with just enough candy coating to sneak a collection of obscure historical and scientific references past even the most ardently stupid listeners. It’s like Dennis Miller meets the Eels, if Dennis Miller voted Dem. And, while the material may not be divergent from much of TMBG’s catalogue, it’s still fresh enough on its own.

“The last five years have felt a little different than the first 20,” Flansburgh says, trying to put a finger on what’s keeping things from getting stale in TMBG’s songwriting repertoire. “With The Else, we really wanted to make sure it was ‘just so.’ As creative people, it can become frustrating to finish something for the sake of finishing it… so we took it very leisurely and had a lot of time to dig in and make an album we could be proud of. Plus we were working with the Dust Brothers, and they take a lot more time than most people.”