Because of the shear volume of places to grab a good bite to eat, Boulder would have dominated our North Metro favorites. This is no knock on the communities to the east—consider it a testament to one of the great dining cities in the West. So we gave Boulder its own page. 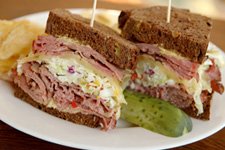 1. New Yorker
Dish Gourmet
Tucked into a corner on the east end of Pearl Street, this little deli serves up a great collection of sandwiches, salads and sides. Our fave is the New Yorker, which piles Pastrami with Emmenthal cheese, cole slaw and mustard on a dark, musty pumpernickel. Not only is the meat local, it is roasted to perfection in house. Each bite is “you-talkin’-to-me?” bliss, which is a welcome attitude on the often to-trendy-for-its-own-good Pearl Street. 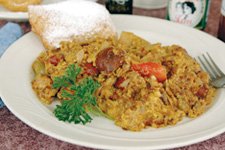 2. Farmer’s Eggs
Lucile’s
There’s something about the first few steps you take into Lucile’s (no matter how long you may have had to wait) that brings the bending of the knees into blissful union with the watering of the mouth—you’re just ready to sit down and eat. Our favorite here is the Farmer’s Eggs, a delightful blend of fresh vegetables, three tasty eggs, cheddar cheese and sausage. It’s hearty and just this side of the kind of gut-bomb indulgence many of the other saucy dishes deliver. And don’t let that accompanying housemade buttermilk biscuit scare you out of an order Beignets to start. They’re like new socks on cold feet—warm and soothing. There are also Lucile’s locations in Longmont and Denver.

3. Masaman Curry
Khow Thai
Everything at Khow Thai is fast, fresh and satisfying, but our mainstay is the Masaman Curry. Alongside a mountain of white rice comes a deep dish serving of creamy spiced coconut milk gravy chock full of potatoes, onions, peanuts and your choice of meat or tofu. And, as with all the entrées at Khow Thai, you get a cup of soup and an egg roll to start. It’s the quickest food coma in Boulder, hands down. Khow Thai also has a Broomfield location.

4. Panzanella Salad
Radda Trattoria
Ain’t it funny how so many old world dishes enjoyed by tony diners around the world were originally made for peasants? One of these is Radda’s Panzanella, a grilled bread salad with arugula, currants, pine nuts (Mmm…pine nuts!), and a delicately balanced red wine vinaigrette. The medley of flavors in this simple dish is really astounding, where a toasty char meets with bitter green accented by the sweet and the tangy. Great with a full-bodied glass of white vino.

5. Sticky Toffee Pudding
The Kitchen
Whether dining in the comfortable elegance of the street level bistro or mixing it up in the hip upstairs grotto, we can always count on the Sticky Toffee Pudding. Ample and comfy, the “pudding” is actually more like a dense cupcake—made with dried dates, a touch of espresso and vanilla, and topped with a gasp-inducing caramel sauce, pecans, and a scoop of housemade vanilla ice cream. Honestly, it just doesn’t get any better than this.