Off Menu With Shamane Simons

Master of the Baked is turning up, turning over, and filling our lives with sweets, treats, and healthy eats. 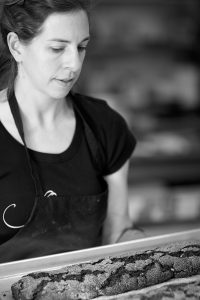 Make food with love and care, nourish the body, feed the soul. Shamane Simons, owner and founder of Shamane’s Bake Shoppe, has been doing so for sixteen years. Having started her culinary career at the Flagstaff house in the pastry department, Shamane quickly ascended to mastery after going to culinary school, baking cakes for famous rock stars, and then working in Europe as a private Chef perusing all the local markets for inspiration. Her pastry career was unexpected, to say the least, but set the foundation for her eventual business that now straddles the delicate balance between indulgence and nutrition.

Today, Shamane can be found developing coffee drinks at the front, doing quality control in the back, or engaging with her customers. Balancing between both departments, baking and cooking, she believes in an all hands on deck attitude and has similar expectations for her team. Her experiences have shown her that independence and creativity are the key ingredients to success in a kitchen that is constantly changing with demand. She strives hard to provide that for her employees, but often it comes down to the attitude with which they seize the day. “I tend to have a very high energy,” she says, so she likes to be surrounded by the same. What comes of it are high-quality baked goods, sandwiches, salads, and more, made from top shelf ingredients such as European butter and chocolate.

Shamane’s culinary vision and style have developed a close-knit community within the kitchen, providing flexible menu dynamics for creativity to flourish. Beyond making her rounds, Shamane is constantly educating her staff. She believes in minimal to no waste and locally sourced ingredients and tries hard to convey that to her staff. Having been a member of the Boulder Farmers Market for over 12 years, she often sends her staff out to buy baskets full of new ingredients based on local availability. This flux in ingredients is often the key factor to their changing menu, even if those changes are seemingly minor such as using heirloom wheat for their croissant doughs.

What stands out when you enter Shamane’s Bake Shoppe is the amazing feast of baked goods that line their counter, but it’s Shamane’s vision of care and love that shines through everything. “I want to serve the public exactly how I would want to eat,” she says, and she does so by using consciously chosen ingredients and making everything from scratch in-house. Located in a business park, much of Shamane’s walk-in business comes from the surrounding area and from call in orders for her pies, cakes, or pastries. “We’re known for our pies” she says, people come for the large variety. Whether savory or sweet, pot pie, or fruit pie, Shamane has something to quell even the most stubborn of palates. For Shamane, food is life, it’s a way for people to find comfort and to heal, it’s a nutritious avenue that replenishes the mind, body and soul.

It “doesn’t mean that you have to have pressed celery juice,” she says, it just means that “you should feel good” and that “it goes into your system as a healthy thing as opposed to something toxic.” At the end of the day, Shamane is creating a connection between her food and her patrons. “It’s really just about making people happy,” she says.

Unfortunately, food can also be a point of contention for people and Shamane understands that. She says that “cuisine is very important in people’s lives, but a lot of people have a demonized relationship with food.” Whether that is because of cravings or weight issues, she wants to provide the opportunity for all people to satisfy their desires and feel good about it. With a smorgasbord of sweets and treats that effortlessly attract all who come by, the temptation is real and Shamane understands that. She says that she’ll encourage customers to go with one of their hearty salads or some freshly made lemonade or iced tea in an attempt to convey that there are many avenues to satisfaction.

At the end of our conversation, I asked Shamane, “is it still stressful after sixteen years?” She replied, “is it what?” Perhaps she didn’t hear me, perhaps the question was too rhetorical for a veteran of the culinary world, still I found it important at the time and so I asked again, “ is it stressful?” This time, she laughed and said, “It’s always stressful.” “If you’re looking for an easy career this is certainly not one of them. You better love it. If you don’t truly love it you probably shouldn’t do it.