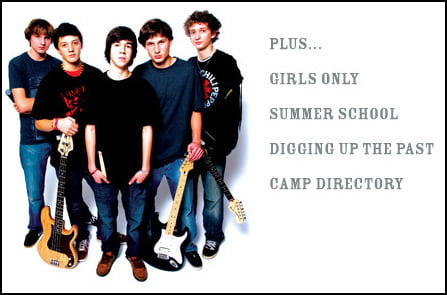 We sent a dozen kids to camp last summer through our first ever scholarship program. Read about their experiences. -ed

The lights are hot and blinding as Pandamen steps onto the stage. The crowd’s noisy, and if you listen closely you can almost hear echoes of past performers permanently etched into the walls of the 89-year-old Ogden Theatre.

The Ogden, a Denver music mainstay, invited a number of up-and-coming local bands to compete in a battle on this night, and Pandamen, made up of teens a year short of driving, made the cut, sharing a stage that has been graced by No Doubt, Blink 182 and the Smashing Pumpkins.

It was one of those defining moments in the young career of Pandamen. To think, it all started at band camp.

The five Boulder-area high schoolers met in a unique summer camp, Dog House Rock-N-Roll Camp, designed to morph Guitar Hero superstars from the garage to the recording studio. While Dog House teaches rock, a number of other area summer camps offer a start in the arts, whether that be music, theater or dance.

Dog House gives an opportunity to break far from high school music class. Campers work with a professional coach who prepares them for performing in front of their friends and family at the end of the week. Or in front of a raucous Ogden crowd. All experience levels of musicians are accepted and their skills are honed alongside other campers with similar knowledge, thus giving the students an opportunity to create their own band identity. Often, these relationships last well past summer’s end.

“It’s a great environment for playing music or learning how to write music,” says Pandamen singer and guitar player Brandon Calano. “When I first went, I had only been playing guitar for half a year, and I didn’t really have a clue about how to write a song.”

Calano’s father, Jimmy, likes the stage that Dog House has set for his son and friends: “I think what made the difference is it’s a high-level studio. The kids were being treated like young professionals. A lot of pretty big bands hang out there and work on their new material.”

Similar pseudo professional experiences can be found for those interested in theater or dance. Camp Shakespeare, offered at the University of Colorado each summer, is celebrating its 10th year, offering a three-week course where campers are instructed on all aspects of creating a Shakespearean production. It’s the closest thing to Summer Stock a camper can get a hold of.

“I think the unique thing about it is this taps into a group of students who are really excited about Shakespeare,” says Amanda Holden, the educational program manager for Camp Shakespeare. “It gets the student to appreciate performance techniques and at the same time it is also tapping into literature and the classics.”

Camps such as the Reverence Academy of Dance in Lafayette train aspiring dancers to become what the industry considers a “triple threat,” honing professional skills in dancing, singing and theater, throughout a weeklong intensive course.

But Calano wanted to further his music career, which is why he has attended the Dog House camp five times, allowing him to meet Andrew Taylor (vocals), Martin Better (lead guitar), Leo Skevron (bass) and Owen Heiberger (drummer).

They’ve been together for two years, practicing daily with the hopes of making it. Though they didn’t win the Ogden band competition or other battles against much more experienced bands, the five seem happy enough just to be playing gigs. For now, anyway.

“We write a lot and we try and play as much as we can. We have goals and we want to make it,” says Calano. “I just want to stick with my band as long as I can because it’s a lot of fun. Even if music isn’t a profession for me later in life, guitar is something that I will always want to play.”