The last weekend of June seemed like the perfect time to break in the legs on the first 14er of the summer. Saturday was one of those warm, cloudless, windless, sunny days that allow you to sit on top of the mountain for an hour or more.

When I reached the peak of Mt. Princeton during this first mountaineering outing of the year, it marked the ninth 14,000-foot mountain I had scaled.

For my good friend Sean, it was No. 18. My brother, Scott, who had flown out from South Florida specifically for this hiking trip, celebrated No. 6.

Those numbers are hardly impressive. There are folks out there who have knocked off all of Colorado’s 54 highest peaks—some in a summer or less. 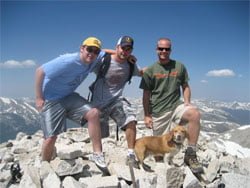 No. 12 is what impressed. That’s how many 14ers the most popular visitor to the Princeton summit that day has achieved.

Rebel is a one-foot-tall Red Beagle with more heart than a sherpa and more cute than a newborn. He jumps from rock to rock, chases marmots, runs up the trail and back, probably covering twice as much distance as his human companions, and rolls in the snow like it’s his day job.

In the last three summers, Rebel has been on top of Elbert, Snowmass, Lincoln, Bross, Democrat, Bierstadt, Kit Carson and many others.

Rebel has come a long way. He’s five now, having lived the past three-and-a-half years in Boulder with his best pal Sean. The first 18 months of his life were spent being abused by a jerk of an owner in the South somewhere.

Now he is perhaps the poster pup for rescuing animals, living a life that consists of hiking, bacon, trips to the Boulder Creek, bacon, sleep and some more bacon. Those brutal memories of an abusive past erased by the offers of cheese, jerky and other snacks by other hikers atop Princeton.

He can nimbly climb rocks that bigger dogs struggle with and turns out-of-shape humans jealous at how easy he makes hiking look.

I’ve been calling Rebel the coolest dog in the world for years now, and there was little argument from the other 14er enthusiasts who marveled at how many mountains such a little dog has climbed.

Sean plans on bringing his best friend up all 54, even if that means carrying Rebel up a Class 4 move on some of the more burly Colorado mountains.

We’re thinking if Rebel accomplishes that, he’ll become the first Beagle to summit all of the state’s storied 14,000-foot gems.