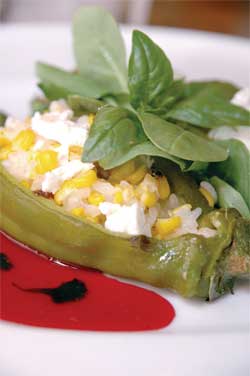 Buried in an industrial neighborhood, Sugarbeet is literally a hidden gem. Chef Seth Witherspoon focuses on local ingredients, including many plucked from a nearby farm he and wife Justine have spent the summer building. We challenged him with sweet corn, suggesting Olathe’s version since its homegrown (Western Slope). He found corn much closer, using a Longmont ear to make a Roasted Sweet Corn, Feta and Risotto Stuffed Anaheim Pepper.

The warm days and cool nights of Colorado make the local sweet corn a little tastier than other growing regions. Count us lucky for the severe temperature shifts when night falls. It’s said to increase the sugar content in corn Western Slope grown Olathe corn gets all the hype, but Seth Witherspoon likes to look even closer to home. So when we challenged the Sugarbeet co-owner and chef with sweet corn, he looked no further than Zweck’s farm in Longmont.

Witherspoon opened Sugarbeet about 18 months ago, adding to the increasingly crowded market of menus featuring local, sustainable and often organic ingredients. We offer a sincere kudos to Witherspoon for keeping it really local, even if it seems like a cliché. Local means fresh. Local means less energy waste transporting the goods. And often, local means better food.

Beyond that, we were quite excited to see what a respected chef could do with the quintessential summer side. Seldom do we veer from enjoying much more than a butter soaked ear fresh off the grill, but this vegetable is so much more versatile.

Witherspoon uses the local corn, peppers pulled from the restaurant’s farm and feta from local favorite Haystack to pull off this southwestern-inspired snack.

The feta serves as a cheese similar to the queso frescos traditionally used in Mexican cuisine—it doesn’t melt offering great texture. It is mixed with a perfectly prepared risotto, corn kernels, garlic, cilantro, onions and basil. It’s served atop a bed of arugula, with a savory prickly pear and balsamic reduction. Witherspoon will feature the plate on the happy hour menu, meaning it’s an inexpensive way to taste the kind of fare Sugarbeet offers—and an excuse to head out for a drink after work.

The stuffed pepper small plate will be on the happy hour menu (4-5:30 p.m. Wednesdays through Sundays) until Sept. 7 and by request during dinner service. For reservations or information on Sugarbeet, 101 Pratt St., Longmont, call 303.651.3330.