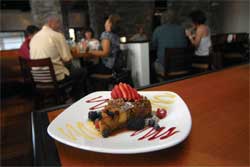 Ever wonder if chain restaurants can really pull off the one-of-a-kind feel and have good food? Yes, yes they can. This has been proven by few, a small list including Woodlands, an American grill in Westminster’s Orchard Town Center.

Woodlands’ decoration is akin to its menu—spare and straightforward, if sometimes lacking in detail. Overstaffed for the three four-tops that were enjoying overflowing bowls of calamari and mussels, my boyfriend and I were seated with never-ending smiles by not one, but two hostesses. A server emerged to take our drink orders, while an idle bartender eyed us between glasses he was in the process of drying. This was dinner time?

We readied ourselves for an onslaught of young family diners, sports-obsessed bar flies, and obsequious servers who insist on asking mid-mastication if we’re enjoying everything. Instead, perfect calm. The quiet that night certainly had nothing to do with the menu or the service.

Our waitress returned with our drinks, a glass of friendly (and fruity) H3 ($9) and a decanter filled with a tannic Firestone Merlot ($8). We sipped in silence.

“What do you think of it?” I nodded toward my boyfriend’s wine glass, glancing quickly over my shoulder to see if our service entourage was in earshot. Reviewing restaurants is, at least in part, an acting gig. Pretend you’re the usual customer, and the experience will be genuine. No one must see—or hear—otherwise.
We went through the usual litany of adjectives for the wine, wondering how subjective tastes ever land on a firm description. The discussion reminded me of a scene from Monty Python’s Flying Circus: Oaky? No. Nutty. Well, yes, also oaky. And a bit like orange.

Baffled by our wine, we quickly selected our entrées—ones that paired well with coconut, oak, and nut under-after-tones. He chose the Bison Burger ($10), while I opted for the Cedar-Plank Salmon ($17).

Rolled into a cute little flower bud, my salmon was capped with toasted breadcrumbs that harbored just enough butter and a surprising kick of lemon to make the dish interesting. Couple this with a richly caramelized top, and the salmon was magnificent. Never too dry, never overwhelmed by intruding sugars, heavy-handed salt, or a God-awful cream sauce. The fish, as they say, stood alone.

My boyfriend made it halfway through his burger before stopping to breathe—a compliment in itself. I think.

The problem with bison burgers is they too often produce a gummy smack-jaw effect from abundant chewiness and lack of flavor. This example, however, was a perfect medium-rare game burger that was eminently tender, juicy, and filled with a treasure trove of subtle herbs.

Our between-bite banter continued as the bartender supervised the progress of our meal. We ranted about George Bush while glass number three-hundred-seventy-eight was dried and giggled about the Onion’s recent lament of the bankrupt Make-A-Wish Foundation.

I was all ready to give Woodlands the boasting rights to four-and-a-half stars—the highest such mark given by Yellow Scene critics to date—before diving into our desserts. We tasted a Berry Brioche Pudding ($7) and Granita with Berries ($7). The bread pudding was cloyingly sweet, paired with too many sauces (berry, crème anglaise, butter-pecan) and occupied too many of my tastebuds with pungent clove. The granita forced puckers with its great love of citrus and counter attack of saccharine-sweet honey.

Still, as we left the restaurant, the subtle flavors of the salmon lingered on my tongue. Sure, Woodlands missed with its dessert tray, but the other superb flavors had us believing in corporate restaurants again.