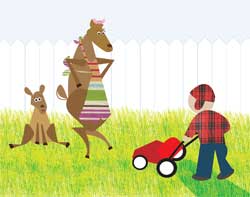 [wildlife]
Don’t Call Her Bambi
Boulder park rangers have warned locals to keep clear of mule deer this birthing season. Seems the deer have turned nasty and chased after pesky homeowners on several occasions. Officials have not reported any deer-related injuries so far. “The deer are giving birth, and they like to give birth in people’s yards,” Taylor said. “When people go out to use their yards, the deer can be aggressive.” When it comes to defending the little ones, mule deer are among the most fierce. David Armstrong, a professor of biology at CU said mule deer, along with elk and moose, could rip you a new one if you mess with their kids. “It’s all about protecting their investment,” Armstrong says of the concerned does. “They’ll try to lead you away…or they’ll come at you if need be.”

[sports]
Jump Well and Live
The International Olympic Committee may be far from sanctioning it, but perhaps jump rope will one day be as well received as curling. That is clearly the hope of jump-rope master Trevor Norris, who took the coveted grand master title this summer at the annual U.S. National Jump Rope Championships in Orlando, Fla. The 17-year-old Broomfield resident is also a member of the Littleton-based “Jumping Eagles,” a precision jump rope team that combines exercise and dance into something known as Jump Aerobics. Norris is pretty much the Tiger Woods of the string. He not only bested the rest in Orlando, but he won the famed “triple-under event.” The triple under is a true test of speed, endurance and skill. Those who dare take the challenge must jump and clear three rope revolutions under their feet in a single jump. We’d like to see Tiger try to pull off that feat.

[college]
Have Gun Will Study
A pro-gun student group thinks fewer crimes would occur on campus if more people packed heat. Students for Concealed Carry on Campus wants the University of Colorado to eliminate the  “gun-free” rules currently in place. The group believes that gun-free zones have proven ineffective, because criminals do not respect gun-free zones any more than they respect human life. The proposal to changing gun rules got shot down pretty quickly, which is not surprising since it’s illegal for people other than police to bring firearms, explosives or other weapons onto any of the state’s campuses. Were not sure if a Super Soaker counts.