A Republican in Boulder 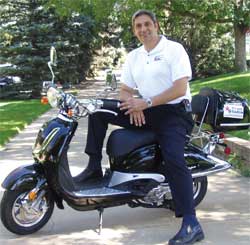 Sipping a small coffee on a sun-soaked café patio, Scott Starin looks as if he belongs in Boulder County. His brand new 77-mile-to-the-gallon scooter with temporary plates is just a lattés throw away, his dress is quintessential Boulder business casual (slacks and a neatly tucked golf shirt), and the lanyard holding his work identifications is testament to his Denver Broncos fandom.

But when you see his name on the Nov. 4 ballot for the Second Congressional District, there will be one letter next to his name that just about guarantees as much popularity as felon in Boulder County:
an “R.”

Yup, Starin is a Republican running for congress in the left-leaning district that encompasses Boulder and Adams counties as well as a smattering of mountain communities along the I-70 corridor.

Nobody is giving Starin a chance. A Republican can’t win this seat. Right? Many assumed Polis’ primary victory party last month a congressional celebration. “I take issue with that,” Starin says.

Starin, a mechanical engineer at Ball Aerospace in Boulder, sees the district through a different lens than most. He doesn’t feel like he’s swimming in a sea of Democrats. Instead, he envisions himself surrounded by independents and moderates who are undecided about voting red or blue. “I do think a lot of people will look past the ‘R’ in my name,” Starin says.

The numbers suggest otherwise. The district, which had its lines redrawn in 2000, has been served by a Democrat since Tim Wirth took office in 1975. It’s been held by Rep. Mark Udall since 1999. The Eldorado Springs Democrat now running for a U.S. senate seat won his last two elections by margins in the 40 percent range.

The Cook Political Report calls the district a solid bet for the Democrat to win.

This all suggests Starin has a Long’s Peak-sized mountain to climb to be the first Republican to hold the seat since the Ford administration. Starin is unfazed. “(Polis) doesn’t give me a chance,” Starin says. “I suggest he read David vs. Goliath. I get frustrated when I read this is a shoo-in for the Democrat.”

To succeed as the giant slayer, Starin must achieve a few things. For one, he needs to get some name recognition. Right now, many see Starin as just the “Republican running.” Then he needs to push his centrist agenda.

His passion is technology, and much of his platform seems to be based on energy solutions. Starin remains vague about his plans but many of his ideals are a stark contrast to his opponent’s (he wants to explore drilling in the U.S., keep our troops in Iraq and is against universal healthcare). But he considers himself moderate and simply needs to find people who will listen.

Another roadblock is his opponent. Polis proved in the primary that he’s willing to spend as much as it takes to win this seat—although he isn’t expecting to spend anything close to the $5.7 million he dropped in the primary. Regardless if Polis opens his wallet, Starin’s bankroll will be dwarfed. So he’ll try to drum up support the old-fashioned way, holding town-hall style meetings, knocking on doors and talking to as many voters as he can. “Every night I’m working,” he says. “I’m running on adrenaline.”

If that happens, Starin believes the rest will take care of itself. “Give me 10 minutes; I’ve got them,” Starin says.

Some other things you should know about Scott: He is not afraid to imitate any Simpson’s character in public, married with two children, loves to go four-wheeling in the mountains and reads non-fiction books almost exclusively.