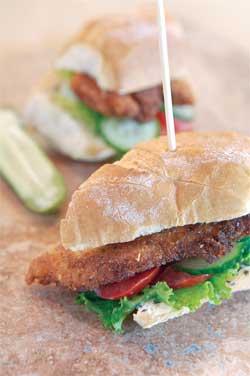 East Coast transplants often get labeled with the snob tag, especially when it comes to food. Let’s face it, culinary hubs such as New York City set a pretty high food bar, which means many of those who’ve migrated west find it hard to accept some of the Rocky Mountain region’s offerings. Great pizza, Italian food, bagels and sandwiches are difficult to find for these transplants who’ve moved to Colorado—and East Coasters rarely mince words when talking about that particular frustration.

Consider Susan Kaiser Yurish in that bunch. Now living in Colorado for the second time (she graduated from the University of Colorado), the Long Island native says she misses two things about her hometown: the ocean and the food. Luckily the 44-year-old mother of two is a talented culinary tactician and has been able to remedy one of those problems: finding a great sandwich.

She opened Hanna’s Delicatessen a year ago in Old Town Lafayette bringing the North Metro region an upscale deli with New York bite. Yurish likes her sandwiches on marble rye, Reubens with Wasabi slaw and pumpernickel bagels loaded with smoked salmon—so that’s what she’s gonna serve you when you stop in. 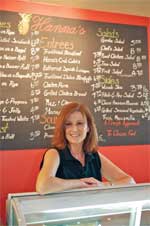 Don’t take it personally if she seems stuck in her sandwich ways. “I feed people the way I want to eat,” Yurish says.

It’s a good thing she likes to eat so well. Her menu is dotted with the classics you’d expect to find at a New York delicatessen: roasted turkey, pastrami on rye, roast beef, and Italian sausage and peppers. She roasts her turkey daily and is extremely picky about the other deli meats that make their way into her case. Breads are selected with equal care and despite her love of the aforementioned rye, she has other options on the menu.

And, now that Yurish is a seasoned Coloradoan, she even offers a decidedly more friendly and leisurely eating environment than a packed counter in Brooklyn.