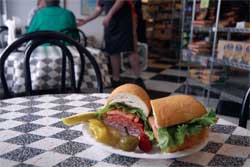 There are few constants in the suburb of Westminster. Here are two of them: The Valente family and their sandwiches that carry cult-like status in the area. Four generations of Valentes have called the Adams County area home, dating back to before the turn of the century. The family also lays claim to the longest standing business in Westminster: Valente’s Deli Bakery, which started as Rodeo Supermarket the same year Ike took office. What began as the neighborhood grocer 55 years ago, has morphed into a deli and gourmet market heavy in Italian heritage.

And for the last 18 years, Valente’s has been serving the biggest sandwiches this side of Little Italy. The offerings are simple: home-baked bread, cheese and gut-busting piles of the finest meats available for import. Dino Valente, the 38-year-old who runs the deli with his father, Larry, doesn’t like fancy. “We are not big into you have to have demi-glaze reduction or a balsamic this and that,” he says.

He learned from an early age that the best ingredients make the best food. It’s the Italian way, and he takes it pretty seriously. So he goes to great lengths in tracking down the finest meats and Italian products—we’re talking dozens of vendors with ties to his heritage. That’s apparent in the taste of all his offerings, whether it be the sandwiches made on bread baked in the store daily or the pasta salads he gets from another source (he keeps the names of his vendors secret).

But its the sandwiches that have regulars coming back in droves. The Capo is legendary, mixing three types of salami, including a spicy calabrese and a mild sopressata to balance the flame. Set aside an hour to digest. The menu also  includes the Valente (a hearty meat mix that includes an out-of-this world prosciutto), and the basics such as turkey, ham and roast beef.

Don’t expect those behind the counter to load your sandwich up with condiments, however. Valente doesn’t like when others decide how much mustard, salt or pepper to put on his sandwich, so he leaves all that to the customer offering a fixin’s bar with every selection you can think of.

That is if you want to mask the flavor of the meat.