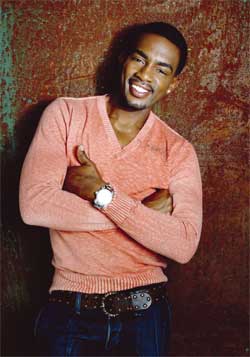 You may recognize him from his work hosting Last Comic Standing on NBC (or his lesser-known and funnier show, Who’s Got Jokes on TVOne), but Bill Bellamy’s been a staple of the American comedy scene for a lot longer. In addition to being a comedian, Bellamy can hold his own on the big screen. His movie career includes roles in How to Be a Player, Love Jones and The Brothers opposite talents like Nia Long and D.L. Hughley. Then there was his performance as a wide receiver in Any Given Sunday with Al Pacino and Dennis Quaid, and Neverwas (with Jessica Lange, William Hurt, Aaron Eckhart and Brittany Murphy). Now touring in small clubs around the country, Bill takes a few minutes out to talk about what makes Jamie Foxx stupid, being responsible for coining one of the most ubiquitous phrases in urban lingo, and personally proving that brevity is indeed the soul of wit…

French Davis: What drew you to Last Comic Standing?
Bill Bellamy: It was a great opportunity to introduce my personality and comedy to a wide audience. It’s an amazing show for comedians. It really does help boost their careers with exposure. I just flat out love doing comedy.

FD: You’re credited with creating the term “booty call.” What other expressions do you wish you had created?
BB: Google. It sounds like goofy mixed with a little gargle.

FD: Jamie Foxx had a great bit about a conflict he had with
LL Cool J during the filming of Any Given Sunday, what was the real scoop?
BB: He got into a fight with a rapper. Not a good idea. Rappers are strong and angry. Then they can put you on their next song! We are comedians. We are organic and eco-friendly!

FD: What pet project of yours is languishing in the wings waiting to get made?
BB: How To Be  A Player Part 2: The Game Don’t Stop

FD: You’re having dinner with three famous people living or dead; who are they and why?
BB: Barack Obama. I would love to understand where his passion for change and love for people began. He has a special fire that I admire tremendously. Martin Luther King Jr. He has always been a hero of mine. I was not able to see this man or know what it was like to see the Civil Rights Movement in its infancy. He was a powerful motivator of peace and change for humanity. Wow! In a time when the country was really afraid to embrace all Americans as one. JFK. What an amazing individual. A president who really thought outside the box. He was loved by the people sincerely. Whenever I see the tape, I feel the pain of a nation after his assassination. He was a maverick.

FD: Who from your past has influenced you the most?
BB: My parents.

FD: When Bill Bellamy needs to laugh, who does he turn to?
BB: My kids are hilarious. You never know what they are going to say or ask you!